Review: This existential riddle keeps the audience on edge throughout 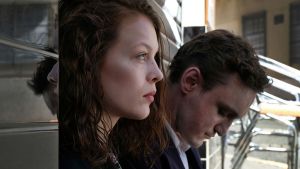 Transit: challenging but worth the effort

Over the past decade, Christian Petzold has been granting one-word titles to the most fascinating puzzle pictures of the era. He now follows Yella, Jerichow, Barbara, and Phoenix, with a drama that works endless smaller conundrums in with one overarching oddity. You couldn’t say the ground was shaky. Transit has a firmness of purpose that borders on the austere, but the sense of uncertainty never lets up.

That larger weirdness hangs around his decision to transfer Anna Seghers’s source novel – a tale of refugees in France during the second World War – into something like the present day. This is both stranger and less strange than it sounds.

With no specific mention of Nazis and no representations of invading troops, it is possible to imagine that we are in an all-too-plausible alternative universe where the far right has taken over contemporary Europe.

But is this really now? There are references to George Romero’s Dawn of the Dead and to architectural features of modern-day Marseilles, but the protagonist uses a manual typewriter and never resorts to a mobile phone.

The feeling of temporal limbo allows the story greater allegorical freedom. We begin with Georg (Franz Rogowski), a displaced German fleeing persecution, accepting a commission to deliver papers to a dissident writer in Paris. The subject turns out to have killed himself and Georg finds himself travelling to endless embarkation on Marseilles.

Even without the introduction of North African characters, the parallels with current refugee crisis in Europe and beyond would be unmistakable. “I can only stay if I prove I don’t want to stay,” Georg says to a suspicious hotelier.

Like the characters in an Olivia Manning novel, citizens of all nations and none rub irritably against one another as they plot different escapes.

Shot in blank, often sun-blasted shades by Hans Fromm, the picture keeps the audience on edge throughout. We are often hoodwinked into forgetting that characters are taking on assumed identities.

Every now and then – as a treat for focusing so earnestly – we are allowed to view the action through the lens of conventional genre. This is, after all, an art-house variation on the Casablanca template (ponder who’s delivering the occasional voice-over).

The ultimate effect is, however, that of an existential riddle that evades unambiguous solution. It is, nonetheless, worth making the effort.