Clemency: A masterclass in anxiety acting from Alfre Woodard

Review: For all its virtues, the film becomes taken up with procedures. But it’s worth the effort 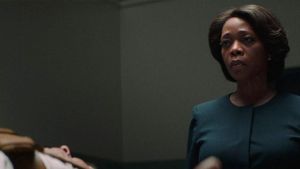 Alfre Woodard as Bernadine in Clemency

It is not uncommon for opponents of capital punishment to argue that the practice demeans and compromises those tasked with its administration. That is not an easy process for film-makers to represent. Nobody is forced to do these jobs. Surely, anyone accepting such a position must have already come to terms with the death penalty.

Chinonye Chukwu’s unforgivingly powerful film — winner of the Grand Jury prize at Sundance — makes the case with great lucidity. It is never made clear what Bernadine (Alfre Woodard), a warden on death row, thinks of the ultimate punishment. But, in their research, Woodard and Chukwu came to the conclusion that most officials in that position pray for the last-minute call that defers the lethal injection. If these deaths must keep happening — and for now they do — it is their job to ensure they happen in the most civilised manner possible.

Among the best actors of her generation, Woodard, unshowy and preternaturally still, offers us a stubborn professional being steadily eaten up by her involvement with the glacially slow killing-machine.

Clemency comprises a catalogue of stress bookended by two heart-rending executions. The first reminds us how often and how miserably these things go wrong: a medic fails to secure a vein through which to pump the chemicals. The second is a symphony in tones of regret, one long shot pulling together all the tensions we’ve endured in the middle act.

The process has been completed, but nothing of consequence has been resolved. The machine continues to chug.

There may be other reasons why Bernadine’s homelife is in such disarray, but the pressures of work are clearly a key factor. A wedding anniversary with her husband (Wendell Pierce) starts off happily enough before going badly wrong. She seems happier drinking whiskey in a local bar where nobody is likely to risk anything like intimacy. Here is a caring person who has yet to address the damage the job is doing to a robust psyche.

For most of Clemency, Bernadine is concerned with the case of convicted murderer Anthony Woods (Aldis Hodge). Just as we never explicitly hear Bernadine denounce the death penalty, we never learn whether, as Anthony argues, he was only indirectly involved with the shooting that turned a robbery into homicide.

It doesn’t matter. The film is about the obscenity that requires an administrator to live closely with a man whose death she will eventually have to supervise. Her face is never more blank that when she is forced to ask the question about his last meal. Such sentimental conventions serve only to emphasise the wretchedness of the process.

Meanwhile, Anthony’s lawyer ploughs his way through the dusty appeals process. Richard Schiff is in typically droopy form — more of a legal beagle than a legal eagle — as a man oppressed by the limits of his Sisyphean task. “When I win, my client gets to not die,” he says.

For all Clemency’s virtues, few could argue that the main body races to its denouement. Shot in flat colours with an unexcited camera, the film becomes taken up with procedures, regulations and a battening down of emotion. There are none of the grandstanding rewards we get from a more mainstream anti-capital punishment films such as Dead Man Walking. Maybe that’s why Woodard was denied the Oscar nomination she undoubtedly deserved.

Nobody could, however, deny the unsettling power of the final sequence. Somewhere there is a list of great scenes involving only an actor’s face. Dreyer’s The Passion of Joan of Arc is there. Bob Hoskins’s closing resolve in The Long Good Friday scores high. Alfre Woodard’s bravura extended anxiety will stand as a masterclass for the ages.

Available to stream from July 17th on Curzon Home Cinema and other platforms.