The Drummer and the Keeper review: airy, funny, optimistic and honest

Trailer for the Irish film, The Drummer and The Keeper. 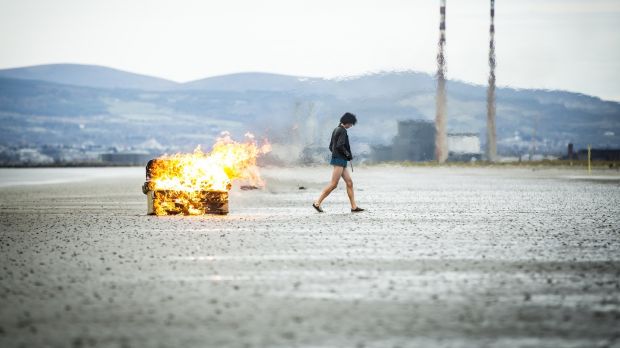 Moth to a flame: Dermot Murphy iin The Drummer and the Keeper

Film Title: The Drummer and the Keeper

After years at the front of the Fat Lady Sings and more years making lucrative commercials, Nick Kelly wanders into risky territory for his debut feature. The Drummer and the Keeper (whose title describes the key characters with some economy) concerns the friendship between a bipolar rock musician and a teenager with Asperger syndrome. Kelly has not made an art film that talks us through the issues with a grim face. The picture is airy, funny and at home to optimism. But it also remains honest about its subjects.

Kelly’s trick is to structure the relationship like that in a romantic comedy. Gabriel (Dermot Murphy), a drummer with problems, and Christopher (Jacob McCarthy), a Lego enthusiast kept at arm’s length from his parents, meet awkwardly, eventually become friends and then have the sort of falling out such stories demand.

Gabriel is exhibiting destructive – occasionally pyromaniacal – behaviour as he fails to cope with the death of his mother. The authorities recommend that he take up football as occupational therapy. On his first day at the pitch, he encounters Christopher, waiting obsessively in the goalmouth. The younger man takes to the grumpy musician and, eventually, ends up working as roadie for the band. Like many people with Asperger syndrome, he has an interest in order and works hard to ensure the instruments are always in the right spot and are properly tuned.

The Drummer and the Keeper (unsurprisingly given its director’s career) has a good feel for the petty rivalries that characterise the music scene. The increasingly busy cinematographer Tom Comerford gives us an attractive urban half-light without overly prettifying.

The film’s main selling point remains, however, the relationship between the two leads. Murphy pulls furrows into his brow that communicate the simmering tensions bursting to break the handsome carapace. McCarthy keeps to a steady monotone that belies careful study and reminds us why – like Lear’s Fool – he is allowed to speak the raw truth while others obfuscate.

The story stumbles a little in its final stages as it fights to tie up its loose ends too neatly. This is a not supposed to be hard-edged realism, but there are limits to how much wishful thinking we’ll allow. An accomplished work nonetheless.