Dakota Fanning: Women like to watch other women on screen

At just 23, Dakota Fanning is a Hollywood veteran - just don't expect her to go all Lindsay Lohan anytime soon 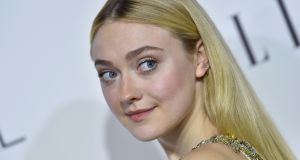 Dakota Fanning: “If you’re not challenging yourself, that’s no fun.” Photograph: Axelle/Bauer-Griffin/FilmMagic

For the longest time, Dakota Fanning was framed as an “old soul” by her invariably impressed co-stars. Glenn Close deployed the phrase when, in 2005, she shared a nine-minute, unbroken scene with the then 10-year-old in the Chekovian-inspired drama Nine Lives.

Kris Kristofferson, who played her character’s grandfather in Dreamer, compared Fanning to Bette Davis. She was 11. Kurt Russell, who played her dad in the same film, was so impressed that he bought her a Palomino pony, saying: “I guarantee you, she is the best actress I will work with in my entire career.” (In a classy back-at-you, Fanning named the horse Goldie after Goldie Hawn, Russell’s partner of 34 years.)

Other Fanning fans include Tom Cruise, who has sent her a birthday present every year since they starred in Steven Spielberg’s War of the Worlds. “Mostly shoes,” apparently.

That “old soul” tag and a muscular recent resumé is slightly at odds with the good-natured, high-spirited 23-year-old one encounters off-screen.

As we meet, she is enjoying being the butt of many jokes among her co-stars on the set of The Alienist. The mini-series, which was created by True Detective’s Cary Fukunaga and largely shot in Budapest, casts Fanning as Sarah Howard, a jazz-age secretary who is determined to become New York’s first female police detective.

“They all think it’s hilarious that I have eight suitcases to bring home,” says Fanning. “But we’ve been in Europe for six months. I don’t think that’s excessive.”

It’s the morning after the Emmy awards and the success of A Handmaid’s Tale. This may be a good omen for Brimstone, a fantastically gothic new western in which Fanning’s mysterious mute faces down Guy Pearce’s demented Old Testament preacher.

Martin Koolhoven’s impressively gruesome film – watch out for incest, intestines and an outhouse murder – uses a medieval bridle’s scold to dramatise the horrors that have been historically visited on women by misguided religious fervour. Perhaps unsurprisingly, there are two Game of Thrones stars – Kit Harington and Carice van Houten – on hand to help dish out the violence.

Fanning pounced on the role after Mia Wasikowska pulled out, leaving her with less than a month to prepare for a shoot that was bloody, muddy, cold, and extremely corseted. “It was a very full-on nine months for me,” says Fanning. “Especially as I had to go and shoot American Pastoral between the winter and summer sections of Brimstone. But if you’re not challenging yourself, that’s no fun. I don’t see the point.”

In 2014, she graduated from New York University, having majored in women’s studies, with a particular focus on the portrayal of women in film and culture. She has subsequently headlined Effie Gray, a biopic scripted by Emma Thompson, probing the bizarre sexual revulsion that Victorian art critic John Ruskin (played by Greg Wise) felt toward his wife, Euphemia “Effie” Gray (Fanning).

She’s currently attached to play Esther Greenwood in Kirsten Dunst’s adaptation of Sylvia Plath’s landmark novel, The Bell Jar. Next June, she’ll appear with Rihanna, Anne Hathaway, Cate Blanchett, Mindy Kaling, and Sarah Paulson in the gender-flipped Ocean’s Eight.“Of course I can’t say anything about Oceans,” she says laughing. “I wasn’t even sure that I’m supposed to admit I’m in it.”

Her interest in gender studies was “already there” before college, she says. “But it does make you think more clearly about finding female characters in film that don’t need a relationship with a man to be validated.”

At 23, Fanning is an industry veteran. The milestones make for impressive reading. Aged seven, she starred alongside Sean Penn in I Am Sam, and became the youngest person nominee for a Screen Actors Guild Award. Aged eight, Steven Spielberg cast her in the science fiction mini-series Taken. Aged 10, she was bonding with Denzel Washington in Man on Fire. Aged 11, she was holding her own with Robert De Niro in Hide and Seek. Aged 12, she was invited to join the Academy of Motion Picture Arts and Sciences, becoming the youngest member in the academy’s history.

“I guess I was protected by naiveté. Being so young I didn’t have any show-business baggage . . . But I had a sense of who they were. I knew they were people that other people had great respect for. You could feel it and see it.”

Fanning has been so long in the public eye that she experienced her first kiss while playing the younger version of Reese Witherspoon on Sweet Home Alabama. Yet there has never been much of a hint of that she (or her younger acting sibling, Elle) might be the next big fallen child-star or the new (and unfairly maligned) Lindsay Lohan. That, says Fanning, is down to her parents.

“My mom has never been a manager or anything like that. The acting was my choice. She’s taught me to stay focused on who I am as Dakota. And to make sure that person is a good person. You can make mistakes, of course. But you try to be the best version of yourself. She’s such a super selfless mom. I just try to be like her.”

Her parents were forced to tag along when, aged six, she began commuting between her family home in Georgia and work in LA. I wonder what she got out of acting that she was so determined from so early on. “A lot of what I get out of it and love about it is exactly the same. I love the experience of making films. I love the camaraderie and the shared focus. As I get older, that sense just gets stronger. I let everything else go.”

She’s not entirely sure were the gene for that comes from, as she comes from a sports mad family. Her mother, Heather, was a tennis pro. Her father, Steven J Fanning, played minor league baseball. Her maternal grandfather was NFL quarterback Rick Arrington. Her aunt, Jill Arrington, was a reporter for ESPN.

“I’ve wondered about this for so long. But no, they’re all professional athletes. I guess some of my family are quite good at drama but that’s not quite the same thing. I didn’t play sports. I do think I have a certain athletic mind-set. Give 100 per cent all the time. Stay focused. Never complain.”

At least she has Elle to confer with. Her younger sister began acting by playing the younger version of Dakota’s characters in the mini-series Taken and the movie I Am Sam. They worked together on the English dubbed version of Miyazaki’s animated film My Neighbour Totoro. Do they talk about work?

“No. We have a mutual understanding and a kind of shorthand. Obviously, when I’m doing a junket or something I don’t have to explain what that is. But we don’t get deep into discussions about it. First it was my thing. And then it was her thing. And it’s still her thing and my thing. It has to be kept separate. That’s how the work is. We’re still looking for something to do together. Then we can talk.”

Johnny Guitar (1954)
When the mob descends on her windswept saloon with their “angry faces and evil minds”, Joan Crawford plays piano in a ball-gown. Take that, mob.

The Ballad of Little Jo (1993)
Suzy Amis is a star-crossed cross-dressing feminist in a subversive western that’s begging for reissue.

The Missing (2003)
When her eldest daughter is kidnapped by a band of outlaws, Cate Blanchett and her estranged father (Tommy Lee Jones) form a rescue party.