Borg vs McEnroe: the power and the fury 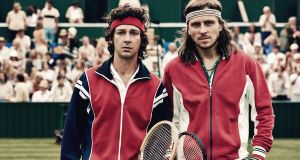 The Wimbledon men’s singles of 1980 showcased more than a clash of styles and temperaments. Björn Borg and John McEnroe – the complementary spirits of the age – delivered a famously thrilling final that featured a tie-break of epic dimensions. Borg was steely and methodical in his baseline rigour. McEnroe was rude, aggressive and volatile. It was a conflict between personalities. But it was also about the societies from which the two men emerged.

The Swedish director Janus Metz Pedersen, whose Borg vs McEnroe treats the rivalry with great skill, has thought long and hard about these issues.

“The film is a dissertation about two very different types of heroes,” he says. “McEnroe was from an America that had a very individualistic culture. Everyone had to fight for their rights. He is from a family of migrants who had to work their way up and were very successful.”

That rings true. McEnroe himself is more specific still and always sees himself as a very typical New Yorker.

“Then Borg grew up in a society in Sweden that is all about equality and you don’t stick out,” he says. “His winner mentality was seen as a problem. You are expected to conform in that society.”

Pedersen here gets at one of the film’s great revelations. On court, Sverrir Gudnason and Shia LaBeouf offer us familiar representations of the players. But Borg vs McEnroe argues that the two men were more similar than their public images suggested. As a teenage prodigy, Borg was consumed with fury and was just as enthusiastic a racket flinger as his future rival.

“They were in many ways two sides of the same coin,” Pedersen confirms. “There was a quest for perfection and meaning in both of them. I think they were both haunted by a deeper existential pain. As a product of two different societies, they expressed it in two different ways.”

Borg continues to be revered in Sweden. As Pedersen explains, the only Swedish sportsman to have approached anything like his level of fame is Zlatan Ibrahimovic. Back in 1980, Borg and Abba were the unofficial faces of the nation. Ingmar Bergman may have attracted the attention of high-brows, but the pop geniuses and the tennis giant crossed all cultural barriers (even if snobbery initially hung around Abba).

“You know there is some connection between Abba and Borg,” Sverrir Gudnason tells me. “They both have an unmistakable Swedish feel. Abba were superstars. Borg was as famous as Michael Jackson or the Pope. But they were very Swedish about it.”

Gudnason and LaBeouf immersed themselves in months of preparation to perfect the tennis sequences. Gudnason emerged fit, muscled and, beneath the famous headband, every bit as hairy as required. He remembers walking the streets of Stockholm and envying random members of the public who had calves and elbows more like Borg’s than were his own.

“It was all about the physical work,” he says. “To do all that training with a personal trainer and then the tennis – two hours a day for half a year – made me realise what he went through. I wake up early in the morning and I had to eat seven meals a day. I drank water, ate breakfast and then it was tennis. Then I’d eat and go to the gym. I’d spend the rest of the day looking at pictures of Björn. Ha ha!”

Initially, it looked as if neither Borg nor McEnroe would have any significant involvement with the film. Both are, as Pedersen explains, busy in their own different ways. But Bjorn ended up being finessed into the project when his son, Leo Borg, auditioned to play the teenage version of dad.

“We tried to connect with Borg and then this happened,” he says. “We were out with this casting brief to find someone to play Björn Borg as a child and we got approached by his own son. He came to us and asked if he could audition. He auditioned like anybody else and he was amazing. He’s a very fine tennis player. He’s number one in Sweden for his age. He has the same mystery as his dad.”

Through Leo they established a connection with Borg and the director was able to talk with the great man about achievements and his unfulfilled ambitions. Borg came on set and marvelled at the recreation of his childhood home.

“He was very touched by it. It was hard to get him off that set. He was overwhelmed.”

Mysteries still surround the career of Björn Borg. He (spoiler alert) won that 1980 final to secure his fifth straight title. McEnroe beat him the following year and the tennis world sat back to anticipate years of rivalry. Borg was celebrated as one of the very greatest, but he had yet to win the Australian or US Opens. Then, in 1983, he walked away from the game at the age of 26. John McEnroe played on for another decade. Roger Federer just won Wimbledon at the age of 35.

“It was a combination of different things,” Sverrir Gudnason says. “He got famous very young and he had been winning and winning. When you win all the time and they expect you to win, the pressure rises. In 1980, he finally has to think about losing. He started to see the end. For McEnroe, that was a slap in the face. He wanted to play him for 10 more years.”

The relationship between McEnroe and Borg is, in its odd way, inspirational. As the film demonstrates, the American had such respect for his rival that he curbed his behaviour when playing him.

There were no tantrums during the 1980s final. (Contrast that with the tense enmity between McEnroe and Jimmy Connors.) They remained friends. John was best man at Björn’s wedding. As time passed, Borg faded from view and McEnroe, once the most hated sportsman in Britain, was embraced as an international treasure. The BBC sports department can’t get enough of him.

“You can’t help but love John,” Pedersen says. “He was such a confrontation to conservative British society. I think the youth were behind him. He was a breath of fresh air.”

Has he seen the film?

“I don’t know. We certainly gave him the chance. I’m sure he’ll think it sucks.”

It does happen. Though not that often.

Farley Granger, a tennis ace, must complete a match in time to stop villainous Robert Montgomery from acting out his evil scheme. The best ever tennis bit in film?

Blowup (1966)
Michelangelo Antonioni’s swinging London thriller was wilfully infuriating throughout, but it reached full quirk with the tennis match featuring no balls.

Hollywood made two attempts to base a marquee film around Wimbledon. Players starred Dean Paul Martin (son of Dean Sr) and Ali MacGraw. Wimbledon set Paul Bettany beside Kirsten Dunst. Both are awful.