Storm in a teacup at the Centre of my World 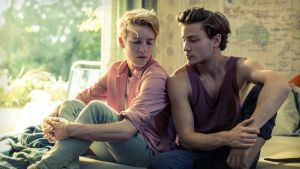 Film Title: Centre of My World

Move along. There’s nothing new to see here. Okay, that’s a little unfair. This German coming-of-age film is not without its cosy pleasures. The cast interact warmly and the sleepy, summery cinematography conjures up a persuasive atmosphere of personal transformation. But, by Golly, this is familiar. There is a sequence in which – to demonstrate freedom – somebody cycles down an open road with arms outstretched. Youths lounge sleepily together by the sort of lidos you only encounter in such European dramas. Ooo. Who’s the new guy in school? Cute enough for a slow-motion saunter before a steady zoom into the protagonist’s stunned face?

The picture begins with an unambiguous depiction of looming change. Amusing, uncertain Phil (Louis Hofmann), who has been away at camp, returns home to find trees upended and fences flattened. A storm has passed through. Another is on the way. His home life was already pretty unsettled. Dianne (Ada Philine Stappenbeck), his much loved sister, and Glass (Sabine Timoteo), his on-the-edge mother, look to be close to implosion at every moment. When Nicholas (Jannik Schümann), the new kid, makes that slow-motion entrance, Phil’s relationship with Dianne is put to the test. Meanwhile, he yearns to discover which of Glass’s parade of lovers was his father. This is one way of becoming an adult. Dianne is barely able to speak with mum.

There are many ruptures along the way, but the overwhelming impression is of pretty people doing things that were once quirky but now indicate off-the-peg quirkiness in cute independent films. Is Glass named for the famous family in the JD Salinger stories? Now, there was oddness worth savouring.

Still, as generic middle-brow entertainment goes, Centre of my World functions adequately. You wish the characters well. You crave for neat endings.