‘Covering the Cannes Festival is the hardest job in the world. Pity Us’

Donald Clarke: The #sordidtruth about covering Cannes in the age of Twitter 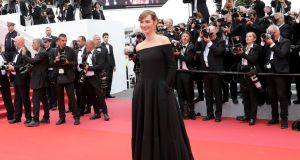 Covering the Cannes Festival is a lot harder than you ungrateful people think. It can get awfully hot and some of the screenings are rather early in the morning. It’s more like being a war correspondent than most civilians suspect.

This is plainly not so. Journalists in this place will moan – as journalists always will – about the inconveniences, but there are few tastier assignments available. In one regard, however, the job has got more taxing. It now never stops. When we are awake we are reporting. As you might expect, the press room, where I am writing this, is packed with furrowed critics hammering out reviews. On my way here, I passed their colleagues composing notes for “the social” as they stumbled up stairs and crouched in corridors. Some of the sharpest criticism from this year’s event may have been written on the lavatory. Don’t @ me. You know it’s so. #sordidtruth.

This correspondent first arrived at Cannes in 2010. It’s worth pondering how the event has changed through the second decade of the century. The authorities are still having limited success in accommodating woman directors. Netflix arrived in the official selection two years ago and then left again after a polite falling out with the nabobs. What has really changed is the way the festival is covered.

Looking back, one is reminded how – even as late as then – that the media were still recalibrating their instruments to internet standards. Twenty years earlier, with no online presence to worry about, journalists would often file a few brief news pieces and a more in-depth report or two on the films in competition. If Stallone fell into the Mediterranean, the news desk would be phoned. The odd high-profile film would pick up coverage the next day. But the current immediacy was inconceivable.

The consensus on a movie is now formed within minutes of the last dialogue. Before the credits are over, a horde of journalists will have issued 240 characters of assessment

Some of that attitude still hung about in 2010. Not every newspaper ran reviews on a daily basis. Many had no dedicated online coverage. (If memory serves me, everything I filed that year – bar light-hearted notes on the now-lamented Screenwriter blog – was published in the newspaper.) It still took hours and sometimes a whole day for consensus to form on a prominent competition film. Though a film such as Mike Leigh’s Another Year would screen for press at 8:30am, there would still be some uncertainty as to its critical standing when the official premiere kicked off 12 hours later.

The attitude of media outlets changed things. But it was the rise of Twitter that really shattered the equilibrium. Here’s a quaint habit from 2010 that you may have forgotten. In those years, respectable institutions such as newspapers and national film bodies often included their own Twitter timeline on their homepage. Nobody seemed to yet realise that this would lead to deranged abuse being presented unedited to blameless visitors. Many who should have known better had yet to figure out what Twitter was.

By the middle of the decade only the wilfully inattentive remained in ignorance. Twitter broke up families, triggered revolutions and brought down governments (or so the medium itself told me). It is, thus, not surprising that its influence on film journalism has been under-reported.

Old movies set around Broadway loved to show playwrights and directors waiting nervously at newsstands for the first notices to arrive. A few days later the Sunday papers would report. If you were still in limbo you could hold out hope for monthly journals. The consensus on a festival movie is now formed within minutes of the last dialogue being spoken. Before the credits are over, a horde of journalists will, at this event, have halted in the foyer to issue 240 characters of barbed assessment. By the time critics sit down to begin their review, they will – for good or ill – already know if they are writing for or against that consensus. The horde was there after Jim Jarmusch’s The Dead Don’t Die. It was there after Ken Loach’s Sorry We Missed You.

When this finally registered with the Cannes authorities they announced themselves unhappy. The premieres of films such as Sean Penn’s The Last Face and Gus Van Sant’s The Sea of Trees were soured by the poor word disseminating from those early press screenings. In recent editions, such screenings have been moved to coincide with the premiere and – from this year – some embargoes have been imposed. When the time comes to tweet, however, the deluge of opinion remains as overwhelming as ever. The impetus to make up your mind right now is irresistible. The flimsiness of curtly expressed opinions is inevitably misleading. Yet information is still power and the sooner it arrives the more powerful it can be.

You can’t imagine the pressure. Covering the Cannes Festival is the hardest job in the world. Pity us.

‘Hey, faggot!’: Gavin McCrea on a lifetime of homophobic abuse and violence
2

Children of the Troubles: They took a child off the road, put a hood over his head and killed him
3