Cannes 2019: Thierry biffs back the beamers – and gives us brilliant bags 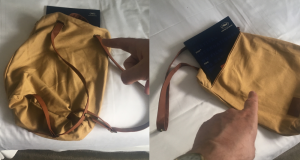 Cannes 2019: this year’s souvenir bag is the best ever

Thierry Frémaux was blocking none of the bowlers at Cannes film festival’s opening press conference. The festival president biffed back the beamers with fearless abandon. He was asked about the gender-parity pledge signed last week and the relatively slim progress this year. Four of 21 directors in the main competition are women. That does equal the record, but no new ground is being broken.

“People ask Cannes to do things they don’t ask other festivals to do,” he said. “The Cannes film festival is asked to be impeccable and perfect. No one has asked me to have 50 per cent of films made by women. That would show a lack of respect.”

Somebody threw down a question about the honorary Palme d’Or going the way of the French star Alain Delon, a man who admitted to slapping women and who has expressed sympathy for the far right. The sight screens took another hammering. “We’re not going to give the Nobel Peace Prize to Alain Delon,” he said. “He is entitled to express his views. Today it is very difficult to honour somebody, because you have a sort of political police that falls on you.” Biff, boff!

A softer question on the politics of Jim Jarmusch’s The Dead Don’t Die was hooked over boundary with ease. “It’s a very anti-Trump film. It talks about American hegemony,” Frémaux said. “America is an extraordinary country. With Jarmusch, we can expect that he is not very happy with what’s happening at present.”

By the close he had become so comfortable with the bowling that he was begging for some more chin music. “You haven’t asked me about Netflix yet,” he said. “And now there isn’t time.”

We assume the cricketing references will be lost on him.

Elsewhere, Alejandro González Iñárritu, the president of this year’s jury, was mouthing off about the awfulness of Donald Trump. It has been a popular subject at Cannes over the past few years, but the Mexican director – whose homeland is not yet behind a wall – was in particularly vocal form at his own press conference.

“I’m not a politician,” Iñárritu said on Tuesday afternoon. “As an artist, I can express through my job and with my heart open what I think to be truthful. I think the problem is what is happening is the ignorance. People do not know, it’s very easy to manipulate.”

Iñárritu and his jury have no Netflix films to consider this year, but the prez still felt it worth laying out his feelings on the virtues of the big-screen experience. “I’m a true believer to watch is not to see a film,” he said. “To watch is something. To see is another thing. To see is to not to experience. Cinema was born to be experienced in a communal experience.”

Donald’s got a brand new bag

It is time for everyone’s favourite bit in the opening Cannes diary. Opinions differ about the quality of recent festivals. But there can be little doubt that the standard of the souvenir bag has never been higher. Over the past decade there has been a lean towards a sort of beach bag – portrait oriented, with a long handle at the top – that sits nicely with the maritime location. (The 2018 version is here.) You could happily sling your flip-flops and doorstop paperback in there and still have space for suntan lotion.

The excellent 2019 edition initially looks like a faux-hessian variety of that new classic. There’s something of a Bedouin water container about it. Play with the straps, however, and you will be knocked back by an astounding innovation. The bag can, with a tug here and a poke there, be transformed into a rucksack. It’s such an awesome bag I am tempted to break the unwritten rule and carry my stuff in it this year. Only joking. I’m no novice. If using a Cannes bag at Cannes, the wise old dog makes sure it is from at least five years ago. You don’t want to look like a new bug.

Odds on the Palme

It’s always worth paying heed to the Palme d’Or odds offered by Neil Young (no, not him) of Jigsaw Lounge. The Wearside critic and programmer knows almost as much about the bookmaking business as he does about film, and he is rarely far from the mark. His ante-post listing has Pedro Almodóvar and Terrence Malick as joint favourites at an uninviting 3/1. Coming in at second favourite are the French film-maker Céline Sciamma and the Palestinian Elia Suleiman, both at 8/1. Odds for amusement only, Neil tells me.

And our opening review from the 2019 festival...

The early trailers for Jim Jarmusch’s darling little zombie flick – opening the 72nd Cannes Festival with a wry snarl – suggested something significantly zanier than the director’s customary downplayed comedy. There looked to be some Shaun of the Dead action there. That’s not quite how it plays out.

It’s true that Jarmusch hasn’t leant so far into high absurdity before. His vampire flick, Only Lovers Left Alive, which played here in 2013, was very much in love with its own deathly languor. But this star-packed entertainment is still unmistakably a Jim joint.

Most of the first hour finds three cops – Bill Murray, Adam Driver and Chloë Sevigny – driving about an increasingly disturbed locale and expressing unease in the drugged, deadened dialogue that the director has made his own. They seem surprised that the dead are rising from the grave and licking lips at still quick citizens, but they’re not nearly so surprised as they should be. The three police officers form an offbeat nuclear family that could work very well in an unconventional situation comedy: Murray is the stalwart dad, Driver is the more intuitive mom, Sevigny is the bright kid in the back seat.

That is the United States that matters. Meanwhile, monsters, poison and idiots are threatening to turn the republic into a cesspool. You could sit through The Dead Don’t Die and, even paying close attention, come away with no political message at all. There’s so much to enjoy without going there. Tilda Swinton is terrific as a Scottish funeral director who fancies herself as a Ninja swordswoman. Iggy Pop, an old collaborator, and Sarah Driver, the director’s wife, have a ball as zombies who crave coffee with their brains. (If I read a gravestone correctly, Iggy’s character is named for the great film- maker Sam Fuller. ) The blue-tinged moons and pitted faces recall both George A Romero and the EC horror comics that preceded that director’s Night of the Living Dead.

The film is, nonetheless, awash with intimations of doom about the state of the United States and the world. Jarmusch never allows his characters much animation, but the cop family’s deadened response seems related to their belief that the world is already so screwed that this new outrage hardly matters. This is not the first anti-Trump movie to avoid explicit acknowledgment of his existence. (The closest we get is Steve Buscemi wearing a Make America White Again hat.)

Nobody will confuse The Dead Don’t Die with a major Jarmusch work such as Stranger Than Paradise or Dead Man. The self-conscious gags that arrive late in the last act, although funny, feel bolted on like flashy spoilers on an otherwise satisfactory motor car. The film plays a little like the record of a bank holiday among old friends. It’s none the worse for that. Indeed, it may be the most satisfactory Cannes opener of the past decade.