Why is ‘Bohemian Rhapsody’ not a musical? Because it wants to be an Oscar contender 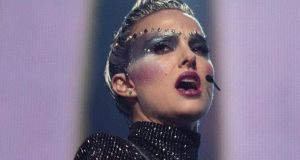 Natalie Portman in Vox Lux: When she finally appears, she’s in every scene

It’s that time when all logic gets turned on its head. Neither A Star is Born nor Bohemian Rhapsody is a musical. The three stars of Yorgos Lanthimos’s The Favourite – Olivia Colman, Rachel Weisz and Emma Stone – may have similarly sized parts, but only Colman counts as a lead actress.

Have you read about Brady Corbet’s Vox Lux? You know? It’s that film starring Natalie Portman as a troubled pop star preparing for a homecoming gig in New York City. Well, she may be at the centre of the film and in every publicity still, but it seems she’s merely a supporting player. It’s as if somebody decided Thumper was the real star of Bambi.

You’ve guessed it. We are already a few weeks into the six months that now constitute awards season. Last week, at the London Film Festival, I talked to Marianne Jean-Baptiste, Oscar-nominated for Mike Leigh’s Secrets and Lies, and she noted how, as recently as 1996, it was possible to be entirely blind-sided by such an honour. “There was an innocence to it. We were just promoting the film,” she said. “Now that tour is called an ‘Oscar campaign’. That was utterly outside of our experience.” Marianne nearly fell off her exercise bike when she heard the news of her nomination.

The skirmishes now start weeks before the campaign proper kicks into gear. The first stage concerns the positioning of your film and your talent in the correct races. These decisions work differently with the Golden Globes (the Mickey Mouse precursor) and the Oscars (the only prize anyone remembers).

In the former, the studio submits in certain categories and – if approved by the Hollywood Foreign Press Association, which runs the Globes – the entrant can compete only in that race. Academy members are free to vote for actors in supporting or lead Oscar races as they see fit, but they tend to follow the instructions given by the lobbyists’ “for your consideration” advertisements. (A notable exception occurred in 2008, when, against the advice of the studio, voters placed Kate Winslet in the lead race for The Reader, which she duly won.)

The situation with the Globes is further complicated by that ceremony’s quaint division of key races into “drama” and “comedy or musical”. The strange story of A Star is Born – and stranger still of Bohemian Rhapsody – takes in an inversion of the customary annual controversy. Thinking it easier to win best “musical or comedy” (and the relevant acting races), studios have slyly slipped notably unamusing or unmelodic films into that competition.

The most notorious example occurred in 2016 when The Martian actually won best musical or comedy. Even Matt Damon had trouble keeping a straight face (unlike audiences at The Martian).

The most furious purist could – if keen to start a fight with his pals – make a semantic argument against A Star is Born’s status as a musical. It is true to say that the film is not a pure non-diegetic musical in the style of West Side Story or La La Land. That is to say the tunes are part of the film’s fictional setting. Nobody is bursting into song over the dinner table while strings magically surge from unseen violins.

But the same could be said of the 1954 version of A Star is Born. The current film more than satisfies Golden Globes precedents in this category.

So what’s going on? The unavoidable conclusion is that the studio views the comedy/musical category as a lesser race. It doesn’t need to sully itself by competing with Mary Poppins Returns and Crazy Rich Asians. It can take on First Man and If Beale Street Could Talk. As 3/1 favourite for the best picture Oscar, it feels able to puff out its chest and bellow: “Come and have a go if you think you’re hard enough!”

Bohemian Rhapsody, a spirited Freddie Mercury biopic, stands no chance in best drama. Rami Malek, the star, could make a dent in best drama actor, but the strategy seems more eccentric with that film.

Following The Martian debacle, the HFPA ended up looking like compliant tools of the Oscar lobbyists. But what can they do here? When Get Out – perfectly reasonably for a satirical horror – was placed in the comedy race last year, a few commentators worried that the African-American film had been demoted.

Others pointed out that comedy was no less valid or worthwhile a genre than drama. Warner Brothers decision to move A Star is Born elsewhere seems to back up the depressing assumption that funny or tuneful films really are a lesser form. But the HFPA is in a bind. The Martian wasn’t a comedy. A Star is Born is a musical, but it’s also a drama. There’s no obvious lie being told here.

Elsewhere, the shuffling for position in the Oscar races is creating storms in various teacups. Why is Colman competing in lead? Well, for starters, she plays Queen Anne in Lanthimos’s magnificent dark comedy, while Stone and Weisz are mere aristocrats.

Remember that Marlon Brando won best actor for The Godfather while Al Pacino, in a significantly larger part, was relegated to a best supporting actor nomination. Your character’s status still matters.

When Olivia Colman won best actress at the Venice Film Festival, the die was cast. There’s probably only room for one best actress nominee and, all going well, that will be the much-liked Colman.

Yet status can sometimes be overlooked if the studio spots a tasty opening. True, Portman doesn’t turn up until over a third of the way into Vox Lux. Raffey Cassidy plays the glamorous, awkward Celeste as a troubled youth. But when Portman arrives, the film gathers itself around her like an attendant court. She’s in every scene. She ends by singing two elaborate musical numbers. Who or what is being supported here?

No matter. This is not the real world. This is Awards Season world. Up is down. Left is right. Only another four months to go.