Cannes 2019: Jim Jarmusch’s The Dead Don’t Die gets festival off to glittering start 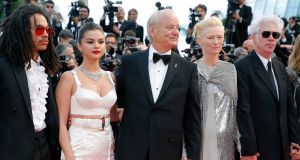 The 72nd Cannes film festival kicked off on Tuesday night with the premiere of Jim Jarmusch’s comic horror The Dead Don’t Die. It was a canny selection of opening film. A star-studded cast, including Bill Murray, Adam Driver, Tilda Swinton and Chloë Sevigny, helped ensure a healthy rush of celebrities on the red carpet. Jarmusch, who won the Camera d’Or for best feature with Stranger than Paradise, back in 1984 counts as Cannes royalty.

The Dead Don’t Die casts Driver and Murray as two rural cops addressing an infestation of zombies with the sang froid we expect from Jarmusch’s characters. There is some broad humour, but the film is mostly an exercise in dry wit that – as we might have expected – has things to say about the current state of America. The sense of dread running about the town speaks to unease about the continuing unloveliness of the Trump regime. “If you ask me the whole thing is going to end badly,” somebody says. The wider meaning is unmistakable.

Coming a year after an event that some felt was short on big names, the current festival promises endless high-profile premieres. There are new films from previous winners of the Palme d’Or such as Pedro Almodóvar, Ken Loach and Terrence Malick.

Quentin Tarantino’s Once Upon a Time in Hollywood, following tinseltown adventures at the time of the Manson Family murders, will screen 25 years to the day after the director’s Pulp Fiction premiered at the festival on its way to the Palme d’Or. Brad Pitt, Margot Robbie and Leonardo DiCaprio, the film’s stars, will all be in Cannes to wave at acolytes and entertain the press.

Irish interest is maintained with a place for Lorcan Finnegan’s science-fiction horror Vivarium at the prestigious International Critics Week sidebar. It will be the first Irish film to play at the strand since Peter Lennon’s Rocky Road to Dublin was unveiled at the famously fractious 1968 festival.

There is no suggestion that there will be any repetition of the protests that led eventually to cancellation in that year of protest, but controversies are, as ever, not in short supply. Tarantino’s decision to address – or at least reference – the Tate murders is tricky for an industry still coming to terms with an unhappy history of misogyny and sexual abuse. It was also revealed a few years ago that Tarantino had put Uma Thurman in danger on the set of Kill Bill.

There was further rage at the decision to present Alain Delon, a key French actor of the 1960s, with an honorary Palme d’Or. The star has a history of dalliance with far-right politics and has admitted to hitting women in the past. “Cannes is sending a negative signal to women and victims of violence by honouring Delon in spite of the fact that he admitted to having slapped women,” the feminist organisation Osez le féminisme objected.

Thierry Frémaux, festival director, responded with a blasé dismissal. “We’re not going to give the Nobel peace prize to Alain Delon,” he said. “He is entitled to express his views. Today it is very difficult to honour somebody because you have a sort of political police that falls on you.”

The Cannes film festival runs until May 25th