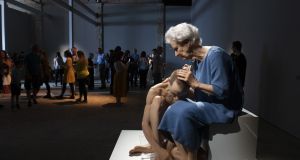 Woman and Child by Sam Jinks, in a temporary gallery space on the site of the GPO in Galway. Photograph: Andrew Downes/xposure

Galway International Arts Festival artistic director Paul Fahy used the opening of its new pop-up gallery, in a “secret” space in the city centre, to launch a campaign for a permanent production hub and gallery in the city. He was speaking in the 640 sq m An Post-owned property in the centre of the city, tucked in behind the GPO, accessed via a lane off William Street.

The building, unused for 30 years, was transformed from dereliction – with eight weeks’ work and more than €50,000 – into a gallery for this year’s festival, to show large-scale sculptures by contemporary Australian artist Sam Jinks.

Fahy reminded those present that “this is a space that Ireland owns”.

The building is one of several unused units behind the city streets which is owned by An Post, a commercial state company. One ordinary share of An Post is held by the Minister for Public Expenditure and Reform – Paschal Donohoe – the rest by the Minister for Communications, Climate Action and Environment – Richard Bruton.

At the festival’s visual arts launch, Fahy said “This is the 42nd Galway arts festival, and here we are in a building many people didn’t know about a few months ago. Pop-up spaces and tents were the [venues] of the day back in 1978. And while it’s wildly exciting to have a far bigger tent in our beautiful blue festival big top, and to go into spaces like this and transform them into cultural hubs and galleries, it’s kind of shocking that 42 years later Galway is still without a proper cultural hub and a proper gallery.”

This was met with sustained applause from hundreds at the exhibition opening.

“An Post couldn’t have been better to deal with and they were co-operative in every way,” Fahy said, echoing festival CEO John Crumlish, who said An Post had been wonderful hosts. “The building hadn’t been used for 30 years. We came in and we said we’d like to redo the floor and redo the walls , and no matter what demands we put on them, they said yes. Thank you for your trust in allowing us to do it,” said Crumlish, singling out GPO manager Pat Dillane and retail manager Aidan O’Donnell locally, as well as head of property Maurice Blake and An Post CEO David McRedmond.

While the property belongs to An Post, which needs to redeem it in some way, Fahy said, “work like this, and in the festival for the next two weeks, enriches our hearts and our souls and our minds and that’s the biggest gift we can celebrate, which enriches us the most.”

Sculptor Sam Jinks praised the festival’s working on presenting his large-scale show. “We’ve been humbled and I can say without hesitation it’s been the best experience we’ve ever had with the show like this.” He admitted when he saw pictures of the derelict space before it had been transformed, “I had some small doubts that it would be possible to turn this place into something serviceable in such a short space of time. But the result has been far more than serviceable; actually it’s beautiful. I don’t think any artist could want for a more versatile, practical space with this much potential.”

Fahy said at the opening “It would be great to think that walls like this could have a life to see many more shows like Sam’s amazing show, but also the flexibility that a space like this could offer for performance, rehearsal, a production hub. So we’re going to try and start a campaign to obtain this kind of space.”

Weeks ago the gallery was an open-ended garage with big brutalist concrete pillars, he said, so he was wearing a tshirt with a giant BRUTAL on the front: “I also want to say that it’s Brutal that we don’t have a gallery on an ongoing basis.”

Hammering the point home, he mentioned the site’s cultural memory: “100 years ago there was a 1,050-seater cinema in this place, the Empire Theatre, with a full-time resident eight-piece orchestra. And here we are 100 years later, as Galway is about to take on the mantle of Capital of Culture in 2020, and we’re without the kind of space that our forefathers and mothers had 100 years ago. So, it’s great to reinject cultural life into the space.”

On Monday the festival started in earnest, with Least Like the Other – Searching for Rosemary Kennedy, which draws on the life of the Kennedy sister who had a lobotomy and was then hidden from view. Giving the Irish National Opera world premiere a five-star review, Michael Dungan called Brian Irvine and Netia Jones’ s work “deeply disturbing art, and deeply moving and humbling”.

Other theatre highlights this week include Dead Dog in a Suitcase, an exhilarating, anarchic musical from UK company Kneehigh, and Druid Theatre’s world premiere of Epiphany , a new play by Brian Watkins.

Among the visual art shows at the festival, another spatial transformation, of the foyer of the O’Donoghue Centre for Drama in NUI Galway into a gallery space, is home to the work of photographer Sarah Hickson, working on a project about direct provision, and shows by Annlin Chao and by Alice Maher and Aideen Barry. At 126 Gallery there’s Diana Copperwhite and Ciara Barker, with Making Space at Galway Arts Centre.

In the meantime, locals have begun working with Olivier Grossetete on The People Build project, to reconstruct the cathedral roof out of cardboard on Eyre Square.