In July 1969, Dennis Hopper’s movie baffled the suits, freaked out audiences and made a fortune 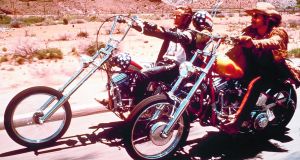 The 1960s began 50 years ago this week. Okay, we may be a few years off the mark. That decade may have begun with the release of Bonnie and Clyde two years earlier. Hollywood has always been slow to catch up with trends in popular culture. It occasionally drives such shifts. More often it reflects them.

At any rate, the decade hit home with force when Dennis Hopper’s Easy Rider freaked out American cinema-goers in July of 1969. Made for around $400,000 – cheap for a studio picture, expensive for a countercultural entity – it went on to take $60 million at the box office and utterly confound the men who ran the industry.

Half a century later, few low-budget films with an alternative inclination can hope to make $60 million in cinemas.

Everything changed for a while. Peter Biskind knew what he’s was up to when he chose the title Easy Riders, Raging Bulls for his seminal (and much disputed) 1998 book on the so-called “New Hollywood”. The industry made a real effort to connect with the funkier aesthetic that had been harvested in Woodstock and matured in Haight-Ashbury.

That cinema reached its apex with the release of Martin Scorsese’s Raging Bull in 1980, but, following the success of Star Wars, the studios had already wrestled the medium back towards the mainstream. What felt like a promising future turned out to be a brief golden era.

Nobody associated with Easy Rider knew they were changing the world. Rumour has it the idea was hatched when Peter Fonda, promoting his role in Roger Corman’s drug romp The Trip, spotted a photograph of himself beside co-star Bruce Dern.

The notion of a film concerning bikers on a drug deal bumped its way into his (we’re betting) addled brain. For some reason, he felt that Dennis Hopper – already impressively confused – might be able to direct such a thing.

None of this sounded very likely until Jack Nicholson, still an obscure oddball, urged them to bring the project to outsiders Bob Rafelson and Bert Schneider at BBS Productions. Later producers of Five Easy Pieces and The Last Picture Show, those men were midwives to the coming movement.

To this day, arguments rage as to who was responsible (or to blame) for the film’s creative direction. Terry Southern, who had written Dr Strangelove and Barbarella, was hired to deliver the script and, despite Hopper and Fonda also receiving credit, always argued that he was the only force that mattered.

“You know if Den Hopper improvises a dozen lines and six of them survive the cutting room floor he’ll put in for screenplay credit,” he said later. “Now it would be almost impossible to exaggerate his contribution to the film-but, by George, he manages to do it every time.”

Jack Nicholson was lucky to secure the part that nudged him towards stardom. Bruce Dern turned down the role of ACLU lawyer George Hanson when he wasn’t offered enough money. The recently deceased Rip Torn was next in line, but he fell out with Hopper and, 25 years later, the two men were still suing one another.

Nicholson was brilliant as the straight arrow who gets turned on by Hopper and Fonda on the road to oblivion.

By Golly, the film is of its time. No contemporary parodies of late 1960s counter-cultural cinema can capture the startling lens flares, meandering dialogue and seat-of-the-jeans plotting.

“It is unwatchable – unless you are benefiting from the illegal substances it advocates,” David Thomson wrote in 2008. That is unfair, but something about that era dated enormously quickly. Films from the 1950s such as On the Waterfront or Rear Window seem less rooted in a distant, faded ethos.

Keeping that in mind, it is not hard to grasp how puzzled the executives were by the success of this odd entity. The most successful film of the decade had been The Sound of Music. That they could market. What to do with this thing?

No cultural fissure during the last century was quite so significant as that which separated those who were adults during the second World War and the hairy baby boomers they birthed.

One story sums this up. When Hopper delivered The Last Movie, his insane follow-up to Easy Rider, the executives at Universal simply had no idea if it was any good or not. After all, they’d thought Easy Rider was lousy and it had made a fortune.

Young employees were rounded up and, unwilling to tell their bosses they had a turkey on their hands, declared The Last Movie a classic. It went on to bomb.

It was that gap in understanding that allowed young directors, fired up on the French New Wave and the Italian neo-realists, to carve out space in Hollywood during the early 1970s. Everyone was happy for a while.

Eventually, The Man caught up and pulled the shutters down. Easy Rider is a tragedy. “We blew it. Good night, man,” Fonda says towards the close. Sometime later a trucker blasts his head off.

The success of Jaws and Star Wars heralded the return of popcorn values that any graduate of Harvard Business School could grasp. Good night, man.