Eoghan McDermott: On My Culture Radar 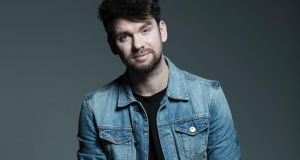 Eoghan McDermott: 'I’ve deleted my Facebook and Snapchat accounts now, but I use Instagram to be nosy'

I’ve just finished an amazing book called I Know This Much Is True by Wally Lamb, about a brother with a personality disorder and how his twin navigates both their lives. It’s a very raw insight into how you can care for someone and be mortified by the things they do, but still love them. It’s merciless in that regard.

There’s a reason Tommy Tiernan has been at the top for so long. He’s consistently funny. With many comedians, you watch and enjoy them and leave it there, but I can watch him over and over again, it’s brilliant stuff.

I saw Let the Right One In at the Abbey Theatre, which was almost excellent. The staging was a triumph and the realisation of people being butchered by a vampire was visceral. But some of the cast were slightly older than their characters and they maybe compensated in a way that was a bit panto. But let’s accentuate the positive: it was wonderful.

My favourite Irish band now and for the last year has been All Tvvins. They’re doing well, but I can’t understand why they’re not infinitely bigger than they are. They perfectly straddle the line between indie darlings and commercial powerhouse.

I’ve just started Manhunt: Unabomber on Netflix. It’s stars Sam Worthington who I haven’t seen since Avatar, so it’s nice to see him stretch the acting chops with this. It’s about a gifted criminal psychological profiler chasing a serial bomber in the States, and he’s being thwarted by bureaucracy because profiling is still a developing science. It’s a little like Mindhunter, which had a fascinating premise but I was disappointed. This bridges the gap.

I’m not saying it’s the best film of recent times, but Wind River is the one that’s stayed with me the most. It’s written and directed by Taylor Sheridan who wrote Sicario and stars Jeremy Renner, where he investigates a double murder near Alaska. It covers desolation and isolation and what that can do to your head. There’s a shoot-out scene which is the tensest one I’ve ever watched, and a nasty form of sexual assault which has seared into my brain in the worst way.

I’ve been watching the evolution of young photographer called Conor McDonnell, who’s from Liverpool. He started out doing music portraits and was on the Forbes 30 Under 30 list, but now he goes on expeditions to the Antarctic and his wildlife photography is incredible. He’s just been made the youngest ever ambassador for the World Wildlife Fund.

New York is my favourite city. I lived there for a year and got the full works: I lived in Sunset Park in Brooklyn which was rough around the edges, then Astoria in Queens, which was family-orientated, then Chinatown, which was full of cockroaches and smells I don’t care to remember. But it’s the most incredible place, there’s a fizz and a sense of possibility. I lived in London too but it’s a tough place to be poor; in New York as a student I didn’t have a penny to my name yet every day was a treat.

I listen to The Blindboy Podcast from Blind Boy Boat Club of the Rubberbandits. He covers everything from books and films he likes to mental health to random interactions on the street. He’s very cerebral but at the same time he’s accessible and normal – he walks that line so very finely, you’re given a masterclass in it.

I’ve deleted my Facebook and Snapchat accounts now, but I use Instagram to be nosy, and Twitter as a news source. I’m obsessed with American pop culture so I love @slate for their news. And my little sister @roemcdermott, who writes for The Irish Times and Hot Press, is pretty ferocious on Twitter.

The Eoghan McDermott Show is on RTÉ 2FM, weekdays 4-7pm