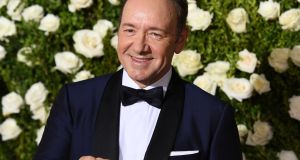 Kevin Spacey is being investigated by Scotland Yard over a third complaint of sexual assault.

The force has been told that a third man was allegedly sexually assaulted by the Oscar-winning actor, this time in Westminster, London, in 2005.

“On December 13th we received an allegation that the man sexually assaulted a man (Victim 3) in 2005 in Westminster,” a Metropolitan Police spokesman said on Wednesday.

The force did not directly link Spacey to the fresh allegation, but said the alleged perpetrator was the same as the subject of earlier complaints.

Spacey was already being investigated over two complaints of sexual assault in the south London borough of Lambeth, one in 2005, the other in 2008.

Spacey (58) was one of the first Hollywood stars to face accusations in the fallout of the Harvey Weinstein scandal.

Following the accusations, the actor was dumped by Netflix’s House of Cards and Ridley Scott erased him from his completed film, All The Money In The World, in reshoots costing millions. – PA