Will Saoirse Ronan win an Oscar? Watch the SAG Awards to find out 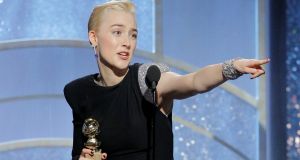 Every actor wants an award from the Screen Actors Guild (SAG). That professional body has only been handing out its gongs since 1995, but, as they are voted upon by peers, they carry more kudos than any others. Right?

We’re having you on. The SAG Awards, which take place in LA on Sunday night, are certainly one of the starriest events in awards season. Their main value remains, however, their status as pointers to Oscar success. Never mind those 90 oddball journalists who vote for the Golden Globes. Some 160,000 industry professionals decide SAG.

The actors’ branch of the Academy of Motion Picture Arts and Sciences – the body that votes on the Oscars – is the largest of its divisions and the majority of its members also vote at SAG. Statisticians couldn’t ask for a more reliable sample.

Saoirse Ronan, a genuine Oscar competitor this year for her role in Greta Gerwig’s lovely Lady Bird, is nominated for the SAG award for the best female actor in a motion picture. If Ronan has even glanced at the form guide she will know that, since 2011, every winner of the award has gone on to win the Oscar for best actress.

In 2011 itself, Viola Davis, SAG winner for The Help, lost out at the noisier ceremony to Meryl Streep for her role in The Iron Lady. (Form books were torn up three years earlier when Kate Winslet won best supporting female actor at SAG for The Reader and then best lead actress at the Oscars for the same film.)

A recent winner of the Globe for best actress in a comedy or musical, Ronan stands a real chance of victory, but the wind is getting behind Frances McDormand. The experienced American actor, incandescent in Martin McDonagh’s Three Billboards Outside Ebbing, Missouri, won the Globe for best actress in a drama and must be regarded as a marginal favourite this weekend. The SAG result will decide if she slips deep into odds-on territory for the Oscar.

Four out of the five SAG nominees are currently in with a decent shot for both awards. Margot Robbie, mentioned as ice-skater Tonya Harding in I,Tonya, and Sally Hawkins, infatuated with a sea creature in Guillermo del Toro’s Shape of Water, join Fran and Saoirse towards the front of the grid. For all her distinction, Judi Dench is making up the SAG numbers with her nod for Victoria & Abdul. (Streep will probably take the Oscar’s number-making-up spot for The Post.)

Elsewhere, eyes will be on the best ensemble prize. No film has won best picture at the Oscars without a nomination here since Braveheart in 1995.

La La Land’s failure to score a nomination in this category last year should have clued us in that it wasn’t the inevitable winner we all assumed. Shape of Water is left out this year. Can del Toro’s film finally break that jinx?

In any case, if anything other than Three Billboards wins this year’s award then we know we still have a genuine race for best picture. Argo’s win here in 2012 swung the odds back in its favour after strong opening runs by Lincoln and Les Misérables.

As at the Globes, the #MeToo campaign will dominate conversation on the red carpet. Interviewers will need to address the issue of female underrepresentation while still keeping their shows zippy. With all this in mind, SAG has made the smart decision to have only women as presenters.

The producers told the Hollywood Reporter that they wanted to offer “a unifying salute to women who have been very brave in speaking up”. The organisers do, however, have potential controversies on their hands. Two nominees, James Franco, up for best actor in a motion picture for The Disaster Artist, and Aziz Ansari, mentioned in the best TV comedy actor category for Master of None, have recently been accused of various sexual transgressions.

Worryingly for the SAG honchos, the stories came to a head after voting had closed. Franco does not have much hope of beating Gary Oldman, but, as a winner at the Globes, Ansari is not out of the running. That could get awkward.

After that carpet is packed away, we move towards the Oscar nominations on Tuesday afternoon. Then the fight gets really fierce (and really dirty).

Ane Brun: How Beauty Holds the Hand of Sorrow review – words and songs to live by
Real news has value SUBSCRIBE