Bryan Cranston: ‘I was going to become a police officer’

Bryan Cranston had a solid career as a jobbing actor for three decades, then ‘Breaking Bad’ happened 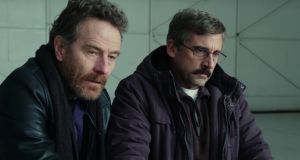 Plenty of movie stars don’t seem like movie stars. But Bryan Cranston seems less like a movie star than most of those who don’t (if you follow). That figures. For around 30 years, Cranston, now a well-preserved 61, was a successful jobbing actor. He didn’t have to do anything else to get by. But he was rarely mistaken for Alain Delon. He did a bit in Airwolf. He made three appearances on Murder, She Wrote. Casting directors had him towards the top of the list marked “ordinary Joes”.

“Yeah, there was a turning point when I was 25,” he remembers. “I had been acting for a few years and it was slow. I got a job in New York City in a soap opera and it felt like I had crossed a threshold. It wasn’t necessarily the work. But I felt: I belong. I can actually see myself now making a living doing this and being happy.”

An enormously calm individual with an everyday voice that rarely rises above an easy burble, Cranston gives the impression that he could have lived contentedly with that equilibrium. Things changed quite a bit when, at the turn of the century, he was cast in the sitcom Malcolm in the Middle. Things changed yet more when, after a slow start a decade ago, Breaking Bad mutated into the signature show of its age. That series’ Walter White, the chemistry teacher forced into the crystal meth business after a cancer diagnosis, was on mugs, tee shirts and mouse mats. An unexpected moment.

“Yes, it kind of exploded. It was Netflix that did it,” he says. “That created the maelstrom of interest and excitement. It really was like a tornado, picking up stuff as it went along. When you first see the funnel cloud, you don’t think much. Then you look back and it’s grown. It was surprising to all of us. I now think it is a classic television show. But you can’t set out to do that. Only an audience can give it that classification.”

Bryan went on to give more performances like the ones that had kept him alive since leaving college. But the roles were larger and people now actually knew the actor’s name. He got an Oscar nomination for Trumbo. You can see him being great in Drive, Argo and Contagion. In Richard Linklater’s imminent Last Flag Flying, Cranston, Laurence Fishburne and Steve Carell play three middle-aged Vietnam vets who come together when one of their sons is killed in Iraq.

The picture is billed as a sort of spiritual follow-up to Hal Ashby’s 1973 classic The Last Detail. (It is based on Darryl Ponicsan’s sequel to his own source novel.) But Linklater has put distance between the current trio and the characters played by Jack Nicholson, Randy Quaid and Otis Young in the earlier film. The names are changed. Their stories are altered. To what extent is it still a sequel?

“Not much,” Cranston says. “I hadn’t seen the film in a long time. I didn’t want to see it. I loved it at the time. I want to see it now that I am done with the work on Last Flag. But I certainly didn’t want to be influenced by Jack Nicholson. I’d end up as a poor imitation. He’s iconic.”

The film draws interesting comparisons between the aftermaths of those two divisive US wars.

“There is more to compare than contrast,” he agrees. “World War Two was fully supported and there was a clear and present danger. Hitler had to be stopped. Mussolini had to be stopped. There was no question. Vietnam started that questioning: Why are we here? 58,000 American soldiers died for what? We hoped that we’d learned. But obviously we haven’t learned.”

As we speak, Donald Trump is shouting at Kim Jong-un and Kim Jong-un is shouting back. No earlier president treated such conflicts in such an apparently off-hand fashion.

“It feels that way and God help us if it really is,” he says. “It feels at times as if he’s a drunk in a bar, challenging another man. They are both posturing to fight. But neither one has the courage to back down because their egos are two involved.”

Bryan was sort of born into the business. His dad, Joe Cranston, struggled to find work as an actor, but he never quite made it and ended up walking out on the family when Bryan was just 11. In previous interviews, he’s spoken movingly of the subsequent change in his circumstances. It can’t have been easy for his mother. Would he call it a tough childhood?

“I don’t have anything to relate it to,” he shrugs. “Up to a certain age it was very happy. Then it completely shifted. It was as if the rug was pulled out from under me. Off I went into the unknown without my father there at all. A new chapter was written for me at 11 years old. It’s not a good age to have a whole new chapter written.”

It interests me that, after his father’s unhappy experiences, Bryan decided to take up acting. Even successful actors, aware how hard it can be at the start, scare their children away from the profession. He had, in his own family, a grim example of how failure can affect a man. Alcoholism often skips a generation for similar reasons.

“Well, it was never something I planned on,” he says. “I was going to become a police officer. At 16 years old they represented a masculine presence in my life. A policeman has a gun a belt and a badge. That’s authority. That’s manly. I thought that was my pathway. It turned out not to be my pathway.”

He took a few acting classes and found himself remembering how much he had enjoyed amateur drama as a kid. He recalled appearing in TV commercials with his father. Bryan finished a degree in police science from Los Angeles Valley College in 1976, but the bug had entered his psyche.

When I was creating Walter I felt he was older than his years. He was carrying the burden of failure and of missed opportunities

It sounds as if he never quite escaped his father. The story goes that Walter White, the Everyman who became the ruthless Heisenberg, was, in part, based on Cranston’s old man.

“When I was creating Walter I felt he was older than his years,” he says. “He was carrying the burden of failure and of missed opportunities. I felt that would affect his body. I rounded his shoulders. I slumped him a little bit. He was a bit plump. He’d gone soft.”

The transformation that subsequently overcame Walter is at the heart of the show’s appeal. There was a little of the superhero myth to Breaking Bad: the quiet man who becomes a nocturnal, pseudonymous avenger.

“When he becomes Heisenberg, the hat goes on, he’s got money in his pocket, he can intimidate people,” he says. “Things change for him. Ego seeps in. I look for those opportunities to find ways to tweak the character.”

Walter did a lot for Bryan. As we speak, the actor is about to head into a (subsequently raved about) West End version of Sidney Lumet’s Network. He recently played Lyndon Johnson on HBO. Happily married for nearly 30 years, he has gone from stability to stardom. I wonder if he ever misses the stability. There was, maybe, less pressure when he was less famous.

“No. I don’t miss it,” he says after giving it a bit of thought. “Just like I don’t miss Walter White. I lived through it. I am one to embrace the ephemeral nature of life itself. You are here now. Then it’s gone.”

The supposed “golden age of TV” was already under way when Breaking Bad debuted in 2008. But its slow-burn success did open new possibilities. Here are five successors.

Among the most missed (and least watched it seems) of recent classics, Bryan Fuller’s show reinvented Hannibal Lecter.

To know this tricky dark espionage show is to love it. Keri Russell and Matthew Rhys are Russian spies in 1980s Washington DC.

The first series was immediately hailed a classic. The second did not deserve the opprobrium put its way.

It turns out there are new ways of approaching the serial killer in contemporary TV. The new way is the old way. The series explores how the FBI defined the rules during the 1970s.

Another show that gained a furious cult without “finding a mainstream audience”, this study of a mass human extinction hits current discontents with icy precision.