Kevin Higgins and Susan Millar DuMars met 19 years ago today on January 22nd, 1999, married in 2005 and have run literary reading series Over The Edge since 2003 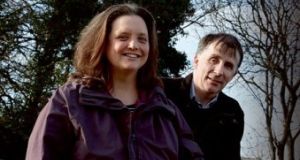 His head recognises the reality of Supermacs
but his heart still steals sweets from Woolworths.
His monologues are every St. Patrick’s Day parade
since nineteen seventy four; his private thoughts
filthier than the old Eyre Square jax.

His political views are like Curran’s Hotel,
not there anymore, but his words still subversive
as someone putting an orange jumpsuit
on Liam Mellows’ statue.

His balances are healthier than the Bank of Ireland
and Permanent TSB, his mouth bigger
than The Galway Advertiser,
but his answer to everything is

Dunnes Stores. His stubble sometimes bristly
as a rough night in Richardson’s;
his idea of himself inflated
as The Great Southern Hotel.

His greatest stroke of luck
drums and face painting
the day she stepped out of a car
and thought: ‘I could live here’.

From Song of Songs 2.0: New & Selected Poems (Salmon, 2017). Kevin Higgins and Susan Millar DuMars met 19 years ago today on January 22nd 1999 and have been together ever since. They married in 2005 and have co-organised Over The Edge, probably Ireland’s longest running literary reading series, since 2003. Over The Edge celebrate its 15th birthday today