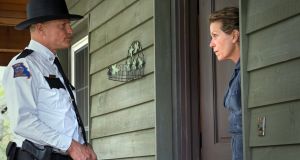 Does this mean anything can happen? Alas, no. Don’t forget that Jenkins’s film was the second favourite. We still knew a lot.

We know plenty this year too. Following nominations (and a few wins) at all the right places – the Screen Actors Guild, the Golden Globes, the New York Film Critics Circle – Saoirse Ronan is assured a mention for best actress when the nominations are announced at lunchtime on Tuesday.

We can pin down around seven sure best picture nominees.

There is further good news for Ireland. Though not a certainty of Saoirse proportions, Nora Twomey’s The Breadwinner, from Kilkenny’s Cartoon Saloon, seems likely to score a nod for best animated feature. Martin McDonagh’s Three Billboards Outside Ebbing, Missouri will be all over the shortlists.

We know these things because awards season now sprawls all the way back to the Toronto and Venice film festivals in late summer. Online coverage of the satellite ceremonies is head-spinningly furious. The average Oscarologist accumulates enough material to fill a (very dull) book even before the Academy Award nominations emerge.

For two years running, this correspondent scored 83 percent on his predictions for the nominations.

For all that, this year’s race does seem strangely unpredictable. We can’t confidently make even a subsequently discredited prediction for best picture as we all did last year.

Yes, Three Billboards is the favourite. But when Guillermo del Toro’s The Shape of Water won the Producer’s Guild of America Award on Saturday – eight of the last 10 PGA winners have grabbed the Oscar – we realised we still had a race on our hands.

Greta Gerwig’s Lady Bird, featuring Ronan as a lovably stroppy teenager, could well pick up enough second preferences to put it over the line. An anti-Trump swell could wash the radical horror film Get Out to victory.

Many bumps will be negotiated on the way to the ceremony in March. But we know these are the nominees.

Well, we know we have 83 percent of them.

Remember that, since 2011, the regulations have dictated that there must be between five and 10 nominees. In the years following that rule change there have been either eight or nine. So an Oscar punter would be a fool to bet on any other number. We’re going with nine.

For fun we have, at the bottom of the list, mentioned the films we think likely to occupy any 10th spot. All the lists below are arranged in decreasing likelihood of inclusion. You’ll have to guess below-the-line categories such as hair and makeup without our assistance.

Martin McDonagh’s brash tale of grief and revenge was installed as favourite after winning at the Golden Globes. But worries about its approach to racial issues have lost it some steam.

THE SHAPE OF WATER

Guillermo del Toro’s romantic horror – featuring Sally Hawkins as a mute woman in love with a fish-thing – is likely to be the most nominated film of the year. Will score in technical and acting. As many as 12?

For a long time it looked as if, one of only two old-school “prestige” pictures competing, Christopher Nolan’s war film was surely the one to beat. But it hasn’t done much in awards season. Still a certain nominee.

The other old-school prestige flick. I said it six months ago and I didn’t change my mind when I actually saw the film. Steven Spielberg’s Washington Post saga has “five nominations, no wins” written all over it. Well, maybe four.

CALL ME BY YOUR NAME

When, way back last winter, it premiered at Sundance, Luca Guadagnino’s gay romance was prematurely marked down as “this year’s Moonlight”. It’s not quite that. But it’s in.

Now we get into uncertain territory. Will this feisty study of skater Tonya Harding prove too gamey for Academy voters? Maybe. But it’s got two acting nominations sewn up. So…

I may be letting my own emotions interfere with good judgement here. Sean Baker’s superb social-realist drama has fared poorly in the Season. But those who love it really love it.

If there is a tenth then from (in order): The Big Sick, Phantom Thread, Darkest Hour, Mudbound.

When Natalie Portman sourly noted that all nominated directors at the Golden Globes were men she (entirely deservedly) boosted the chances of Greta Gerwig immeasurably. If Christopher Nolan fails to get his first nod there will be a different class of fuss. Anyway, we’ve gone with the Director’s Guild of America’s nominees. A pretty sure guide.

Jordan Peele (Get Out)

We have a real race for the win, but the nominees seem pretty certain. McDormand is favourite, but any one of the first four below could win. Streep’s role in The Post has (see above) “nomination, no win” written all over it.

Sally Hawkins (The Shape of Water)

In marked contrast to the best actress race, we have a near-unbeatable favourite in best actor, but we also have much uncertainty as to the nominees. Timothée Chalamet looks to be the only person with a chance of beating Oldman, but, were he to win, he would, by a full seven years, be the youngest to ever take the prize. Day Lewis would break his own record for most best actor wins, but Phantom Thread may be a little recherché for this electorate. Following revelations about sexual misconduct late in voting, Franco’s inclusion for The Disaster Artist could cause trouble.

Timothée Chalamet (Call Me by Your Name)

Daniel Kaluuya (Get Out)

A straight fight between two veterans playing two very different troublesome mothers: Janney’s is a monster, Metcalf’s is touchingly flawed. Mary J Blige should score Netflix’s first ever nomination in an acting category. Then it gets harder to call. Hong Chau is very good in the unsatisfactory Downsizing, but her role racially “problematic”. The great Lesley Manville will probably be just pipped for Phantom Thread.

Another two-horse race. Willem Dafoe (who deserves it) made the early running, but Sam Rockwell edged ahead with his win at the Golden Globes. Jenkins seems certain of a nomination. Then we’re guessing.

Richard Jenkins (The Shape of Water)

Christopher Plummer (All the Money in the World)

Unusually, “adapted” is the less competitive of the two writing categories this year. The top three seem fairly secure, but the other two could come from almost anywhere. Logan really could become the first superhero film nominated for writing.

Call Me By Your Name

There is a real brawl afoot here between the potential best picture nominees. Martin McDonagh can book a seat for Billboards. Get Out and Lady Bird are surely in. Amazingly, potential winner The Shape of Water is vulnerable. I, Tonya looms.

Remember when, following stellar reviews, Blade Runner 2049 briefly looked like a best picture nominee. Annihilation at the box office did for that, but Roger Deakins, nominated 13 times without reward, is a marginal favourite for his work on that film. One more thing to watch: if Rachel Morrison gets in for Mudbound, she will be the first woman ever nominated.

When it was announced that, from this year, all Academy members – not just the well-informed animation branch – would get to vote on these nominees it looked bad for the Irish studio Cartoon Saloon. But Nora Twomey’s touching The Breadwinner won friends and, helpfully, it turned out to be a very iffy year for mainstream studio animation (we’re predicting Boss Baby, for Pete’s sake). So it’s probably in. But nothing is beating Pixar’s Coco.

This is always a bizarre category. Two of the favourites, First They Killed my Father and BPM, have already been excluded from the long list. They may as well draw straws. In the Fade, which really isn’t very good, could actually win. Loveless deserves to.

In the Fade (Germany)

There are few breakout titles here. Brett Morgen’s Jane – a study of Jane Goodall – has won many friends. City of Ghosts, concerning journalists working in Isis-controlled territory, has picked up terrific reviews. Expect something from way out of leftfield. A win for Faces Places, from Nouvelle Vague pioneer Agnes Varda, would be hugely popular.

Gay Byrne: ‘I am no different to hundreds of thousands of people who lost money’
7