The Rise and Fall of the British Nation: Timely jolt to a deluded ‘Bullshit Britain’ 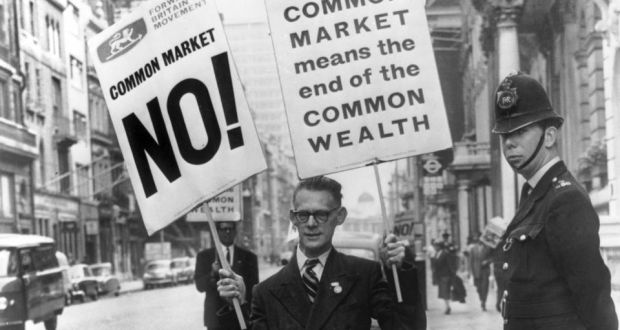 An Englishman waves placards against the UK joining the European Common Market a few years ahead of its entry. Photograph: Keystone-France/ Gamma-Keystone

Book Title:
The Rise and Fall of the British Nation: A Twentieth-Century History

Our neighbours to the east feel the hand of history on their shoulders. Britain’s Brexit future stands on a foundation of faith in a particular past. A “unique” and stable “island story”, we are told, sets Britain apart.

This is, of course, nationalist delusion. “The time is long overdue,” writes David Edgerton, “for a good rattling of the cage of cliches which imprison our historical and political imaginations.” Edgerton makes the familiar 20th century look foreign with a provocative butchering of sacred British beef, showing both how the UK has become more like other rich countries, and how its relationship with the rest of the world shaped its domestic development.

In 1900, Britain was different from its neighbours in “astonishing ways”, an open hub of free trade at the heart of a vast empire ruled out of “the barrel of a British gun”. Its steamers roamed the high seas with British exports, and brought home the plenty of the globe. Cheap coal fired an economy that continued to modernise long after the industrial revolution: in 1930s Leeds, Montague Burton’s made-to-measure suit company employed nearly 10,000 women in the largest clothing factory in the world.

Coal and textiles were sold to the continent more than the colonies, and Edgerton has no time for imperial nostalgia – “systematic racial discrimination was central to the British empire” – or amnesia: it was a militarised global empire that waged two world wars with steel and gold, not Britain standing “alone”. Nor was that empire “lost” or “given up”; “it was taken away” by military defeats and popular resistance.

Out of the wreckage of war emerged many nation states, among them a new “British nation”, and the post-war decades are the heart of Edgerton’s narrative. While Britain often dismisses nationalism as the preoccupation of Celts, colonials and continentals, for at least 30 years the “nation” became the dominant focus of British policy and public life, not least for the nationalist Labour Party who branded itself “the true party of the nation”.

The “national interest” and a national – rather than global – economy meant Britain turning its back on the sea to focus inwards. Alongside the “New Jerusalem” of the welfare state – which Edgerton shows was hardly remarkable by European standards – was the warfare state of a “new Sparta”, with Britain ‘”militarised to an unprecedented peacetime degree”. Economic nationalism was Britain’s real “post-war consensus”, as the land of free trade became one of “of tariffs, quotas, import surcharges”, moving towards self-sufficiency in food and energy in “an epochal transformation” widely ignored.

Despite growth and improving living standards, the relative success of other nations fed anxieties of “British decline”. In 1980, British Leyland (a nationalised company) would advertise its new Austin Metro as “the British car to beat the world” in a TV ad featuring German, Japanese, French and Italian cars being beaten off an English beach as “Rule Britannia” played in the background. Edgerton is scathing of the idea that Britain was economically regressing and shows instead a dynamic national economy: “declinism was always closely linked to notions of British exceptionalism”, an obsession that has blinded generations to realities at home and abroad.

National anxiety was one of many factors behind the UK’s desire to join the growing European Economic Community. Both imperialist right and the nationalist left resisted what Labour leader Hugh Gaitskell lamented as “the end of Britain as an independent nation state”, “the end of a thousand years of history”. Eurosceptic Labour MP Eric Heffer decried how the Common Market would privilege continental fresh food over the preserved Commonwealth foods preferred by “working class families”: “tinned salmon with salad followed by tinned peaches and tinned cream”. Britain was wrestling with past and future, nation and globe. ‘”We might be happier out in the wind”, wrote JB Priestley, “risking the loss of colour television, holidays in Spain, more and more cars, prepared to make audacious experiments, so many odd but exciting islanders.”

Britons chose a colour future, and the nation became “more European, by choice”. Culture and society were changing too, but this remains mostly a materialist (and male) history. The 1970s saw not what Margaret Thatcher characterised as a crisis of social democracy, but its peak, from universal welfare benefits to comprehensive education, social partnership to industrial strategy. Yet international economic challenges and the industrial unrest provoked by structural change provoked political upheavals with unexpected results. From welfare to public assets, the state had not failed but strengthened – not least through the expansion of the security services through a dirty war in Northern Ireland – and it was not rolled back but repurposed through privatisation and radical shifts in priorities.

The Iron Lady “undoubtedly failed” in her pursuit of a stable, socially conservative Britain, as economic nationalism increasingly gave way to “openness to the world, to other people as well as other things”. Her Euroscepticism was futile, her Falklands War ‘”a last quixotic adventure” for nationalist John Bull to protect (invariably white) “kith and kin”. The national economy was transformed again into a global one, creating “a nation of shop-workers” not shopkeepers. People bought more, consumed more, even chose more expensive pets: the cheap budgerigar gave way to more cats and dogs. Alongside greater prosperity, however, came “a profoundly unproductive politics”, in which ‘the greatest and easiest returns came from ownership of property”, and the poor were increasingly stigmatised.

Edgerton’s analysis of the past two decades is somewhat marred by his fury at contemporary politics, and the absence of the financial crisis, austerity and Brexit. “Only satirists”, he concludes, “not historians, could do justice” to recent events. Yet historical clarity is just as sorely needed in an age of obsessive “fantasies of transformative revival and distinctiveness”, encouraged from political left and right by empty talk of “British values” and “British jobs for British workers”.

Edgerton’s dense, rigorous book would be welcome reading for the policymakers of a country that knows so little of its own history. By exposing exceptionalism and the shifting balance of nationalism and openness, Edgerton offers a timely jolt to what he condemns as “Bullshit Britain”.
Dr Christopher Kissane is a visiting fellow in economic history at the London School of Economics