Electric Picnic: Thanks for the sweet nothings, Daddy G 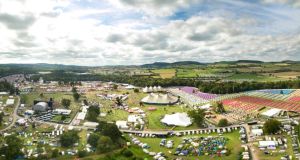 Electric Picnic 2018: the sunshine is a bigger surprise even than Massive Attack’s tent-trembling soundcheck. Photograph: Aerial.ie

Muggy heads, breakfast smoothies and a 10am wake-up call courtesy of a sound-checking Massive Attack: day two of Electric Picnic doesn’t quite begin with a bang, but it is certainly off to an interesting start. The sun comes out, too – a bigger surprise even than Massive Attack’s Daddy G whispering sweet nothings in your ear as the trip-hoppers’ claustrophobic grooves make your tent tremble as if in fear of its life.

Most striking of all is the hush that has stolen over Stradbally, if only temporarily. Even the techno funfair – the one that you could hear all night and that had infused itself into your subconscious – has fallen briefly silent. Out into this before-the-madness calm you may have wandered, as if in a dream (a dream in which you spend the entire time looking for a coffee stall that didn’t have a queue snaking all the way into next week).

Electric Picnic is all about big stars on the big stages and about losing yourself in the techno-pagan hinterlands of Body & Soul and the Rave in the Woods. But it’s also about moments such as these – gazing befuddled at the early-morning yoga classes and trying not be caught earwigging on the gospel choir warming up with Radiohead’s Karma Police. (Yes, that was me listening to you from that log.)

In the afternoon rumours are also still flying – or at least gliding impressively – about today’s surprise early-evening performance by H****r, whom you will know from his hit Take Me to C****h . . . I can’t tell you any more, because . . . sssshhh . . . it’s a secret.

Fashionwise, alas, Electric Picnic hasn’t really been outdoing itself. Whether reflecting the age profile of Picnickers or the fact that, with Donald Trump coming to Ireland in November, we’re all doomed anyway, the plain truth is that this year most of us are dressing down with a vengeance.

Yes, a big high five to the gentleman wearing the ironic Pope Francis T-shirt, and kudos to the many chaps rocking bandannas. (Can we call them mandannas, please?) Generally, though, people have been making an effort to seem as if they aren’t making an effort. Coachella-style selfie hell has never felt farther away.

That Electric Picnic is still a festival apart is further confirmed at Mindfield, where, by lunchtime, a line already stretches outside the Leviathan tent and its promise of a debate on “beyond the binary”. Toto, I’ve a feeling we’re not in Féile/Oxegen/Longitude any more.

Back at the Body & Soul arena – actually, we’re still there, trying not to stalk the Radiohead choir – quirkiness abounds. In defiance of the basic laws of Irish festivalgoing – on the second day thou shalt be cosmically hung-over – punters have risen with the crack for urgent hot-tub sessions (this is not a euphemism) and holistic workshops.

Such is the demand for soulful distraction that two women asking about the workshops are told that all places have been taken. They would have better luck at the swimming area at the back of the campsite, where those with the energy – a minority, you suspect – have been off for an early-morning splash.

The real splash comes as the music resumes, with Massive Attack and N.E.R.D to follow Friday evening’s epic turn by Kendrick Lamar. On the main stage the bubbly brothers Hudson Taylor kick it off. After that an enthusiastic Electric Arena audience reduces Sigrid, the Norwegian pop deity, to tears. (“Tears of Sigrid” are also, incidentally, a spell from Advanced Dungeons & Dragons.) And suddenly we’re off to the rock’n’roll races once again.