Electric Picnic: The Irish hip-hop group your parents have never heard of 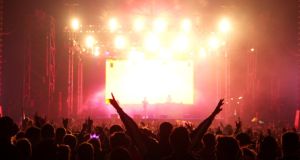 The pose and play-acting are pitch perfect. Three young men are gathered on a sofa in the Hot Press Chatroom in Electric Picnic’s Mindfield zone. One has been designated spokesman, and he answers questions intelligently while, beside him, the other two sit silently, sunglasses on, wrapped up in hoodies and caps, looking like a Back to the Future version of Pet Shop Boys.

Occasionally one of the silent guys – either Alex “Eskimo Supreme” Sheehan or Casey “Casper” Walsh: we can’t tell the difference – leans over and whispers in the chatty one’s ear. At these moments the spokesman interrupts the increasingly perplexed interviewer with questions. “What is your dog’s name?” “What did you have for dinner last night”?

Welcome to the world of Versatile, the most potent and successful Irish hip-hop unit your kids know only too well and which you have probably never heard of. They have been around for a few years, dragging Irish hip hop out of Ringsend and into the city-centre limelight through a series of viral-hit videos – She Goes Out with a Redhot, Mad Scene, Ketamine. At Electric Picnic on Friday they delivered a scorched-earth take-it-or-leave-it manifesto to those who had managed to get into the Electric Arena.

It was a moment of perfect timing for the potency and authenticity of Irish hip hop, particularly as Kendrick Lamar would soon be headlining the main stage. As it turned out, and as if we didn’t guess, Lamar’s performance wasn’t a patch on Versatile’s, but them’s the breaks.

The next step for the Dublin crew? A gig at the Olympia Theatre in Dublin, on October 28th, but don’t bother trying to get a ticket. It sold out weeks ago. The group you never heard of? Not any more.

Dancing With The Stars 2019: Jennifer Zamparelli and Nicky Byrne’s zero chemistry a turn-off
9