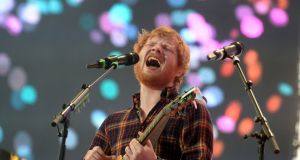 Ed Sheeran said receiving a MBE was a “big deal” for him and his father. Photograph: Cyril Byrne/The Irish Times

Ed Sheeran has said he wishes his Belfast born grandad who was a royalist had been alive to see him be awarded a MBE.

Sheeran was awarded an MBE (Member of the Most Excellent Order of the British Empire) in the Queen’s Birthday Honours List in June.

The 300,000 tickets sold for his concerts in Dublin and Cork is a record for a musician’s Irish concerts.

In a pre recorded interview with RTÉ’s Late Late show, Sheeran performed Nancy Mulligan, the song inspired by his grandparents William and Anne Sheeran who married despite being from different religions.

Sheeran said the MBE was a “really big deal” for him and his father.

“My grandfather was a huge, huge royalist and loved the royal family, had commemorative plates and sh*t. He was bang into it. He sadly passed away in 2013 but when the MBE came in, I remember being with my Dad and being like, ‘ah sh*t, wouldn’t it be cool if granddad was alive now to see this’,” he said,

In a wide-ranging interview Sheeran will talk about the inspiration behind his song Galway Girl, his love of Ireland, why he’s steering clear of social media.

He will also perform the Christmas song Fairytale of New York, alongside Picture This, Lisa Hannigan and Beoga.

Malachy McCourt: ‘Frank wouldn’t be happy unless he was miserable’
6

Living with Prince: ‘I think it’s time you got birth control’
7

The Dead of the Irish Revolution: An absorbing book that counts the cost of war
10

Why does The Crown have a problem with Ireland?
Real news has value SUBSCRIBE