Frontman apologises after video of incident posted on socila media

Queens of the Stone Age frontman Josh Homme has apologised after kicking a female photographer who was working at a concert in California. The singer apologised after video of the incident was posted on social media. Video: Chelsea Lauren / @QOTSA 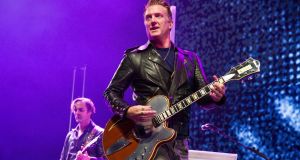 Josh Homme of Queens of the Stone Age on stage at the Forum Theatre on Saturday in Inglewood, California, where he kicked out at a photographer. Photograph: Amy Harris/Invision/AP

Queens of the Stone Age guitarist and singer Josh Homme has apologised after a female photographer said she was kicked during a concert.

Chelsea Lauren posted a video to Instagram which appears to show Homme kicking out at woman holding a camera.

She wrote: “Thanks to josh homme queens of the stoneage I now get to spend my night in the ER. Seriously, WHO DOES THAT?!?”

She told Variety magazine that Homme had actions were “obviously very intentional”.

“I saw him coming over and I was shooting away,” she said. “He looked straight at me, swung his leg back pretty hard and full-blown kicked me in the face. “

She says she will file a police report.

Ms Lauren later wrote that she was released from hospital early the following morning, adding “My neck is sore, my eyebrow bruised and I’m a bit nauseous.”

Homme wrote on the Queens of the Stone Age Twitter account that he was “lost in performance” and believed he had kicked over lighting on the stage.

Upon hearing that Ms Lauren was injured, he said: “I did not mean for that to happen and I am very sorry.

“I would never intentionally cause harm to anyone working at or attending one of our shows and I hope Chelsea will accept my sincere apology.”

He later posted a video on the band’s Twitter page where he said he had to “figure out some stuff”.

The singer (44) said: “I made a lot of mistakes in my life and last night was definitely one of them... “I wanna be a good man, but I think last night I definitely failed at that... I’m gonna have to figure out some stuff, I think.”

The band were headlining on Saturday at the KROQ Almost Acoustic Christmas concert in Inglewood, California, when the incident took place. – PA