A sequence of visions of Chopin

It’s always a pleasure to meet so accomplished, so resourceful and so thoughtful a virtuoso as Russian Daniil Trifonov 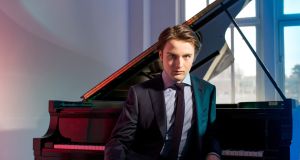 Russian pianist Daniil Trifonov: ‘What he does with his hands is technically incredible,’ according to one of the world’s greatest living pianists, Martha Argerich

There was a real sense of special occasion for last week’s NCH debut by the of the 26-year-old Russian pianist Daniil Trifonov. And why not? Trifonov has become a kind of all-conquering musical personality. He has done the obvious. He has won more than his fair share of competitions. He has secured a major recording contract with Deutsche Grammophon. He is in demand on the greatest stages in the world.     But he has done far more than all that, too. He has won the admiration of one of the greatest of living pianists. Martha Argerich has said of him, “he has everything and more. What he does with his hands is technically incredible. It’s also his touch – he has tenderness and also the demonic element. I never heard anything like that.”

Although his NCH programme included works by Mompou, Schumann, Grieg, Barber, Tchaikovsky, Rachmaninov and Chopin, there was really only one composer in the frame.

The evening was a sequence of visions of Chopin, with the best-known being the shortest, the brief evocation of Chopin from Schumann’s Carnaval. The most extensive were sets of variations on themes by Chopin, the often languid imagination of the rarely heard Catalan composer Federico Mompou kept on a tight rein, Rachmaninov’s Chopin Variations trimmed and amended to Trifonov’s own taste.

Grieg’s little-known Chopin homage, from his 1906 Moods, Op 73, sounds almost un-Grieg-like, and Tchaikovsky’s Un poco di Chopin pays its respects through a mazurka. The most indirect of the connections is an American-Irish one, Samuel Barber’s Nocturne, subtitled Homage to John Field. This piece links up the composer known as the creator of the nocturne with the greatest exponent of the nocturne through the imagination of a 20th-century American.

Trifonov’s approach throughout was of the art that hides art. His delivery is fabulously pliable and extraordinarily soft-spoken. His adaptability is, in musical terms, the equivalent of a skilled contortionist.

At some point or another, most pianists find themselves reshaping particular passages to take account of their own technical limitations. Trifonov gives the impression of never needing to deviate from his vision, of always finding equilibrium without compromise. And he does this without showiness, without at any time drawing attention away from the music itself.

The evening’s final vision of Chopin had of course to be Trifonov’s own. The second half of the concert was devoted to Chopin’s Funeral March Sonata, which was unfolded as a kind of seamless design in which every detail had been minutely re-shaped.

Strange to say, while the fastidious delivery in the first half always communicated a sense of closeness to the music, in the Chopin the feeling was of a certain distance, especially in the actual Funeral March movement and in the forward-looking, almost futuristic rush of the finale.

It’s always a pleasure to meet so accomplished, so resourceful and so thoughtful a virtuoso as Trifonov. And it was an especial pleasure a week earlier to find a similar thoroughness of conception and detail from the RTÉ National Symphony Orchestra under Nathalie Stutzmann.

Stutzmann’s was a programme about death, Richard Strauss’s tone poem Tod und Verklärung (Death and Transfiguration) and Mozart’s Requiem in the long-familiar completion by Franz Süßmayer.

Some of the listener feedback I picked up regarding Stutzmann’s first concerts in Dublin was that her style seemed underpowered. Like Trifonov, she is a musician who does not raise her voice when she does not need to. She is happy to adopt a conversational tone as the norm rather than engage in something more on the lines of politicians in the heat of a television debate.

Her focus in the Mozart Requiem was quite different from her norm. She treated the work as a statement of high drama, with lots of sharp accentuation, an abundance of the kind of hairpin accents that the late John Beckett was so fond of, and a kind of searing intensity that many people might regard as more 19th century than 18th century.

The delivery lacked for nothing in conviction and the members of the RTÉ Philharmonic Choir were pushed to the limit, and sometimes beyond, for intensity of expression. Contralto Sara Mingardo shone among the team of soloists, with strong contributions from tenor Robin Tritschler and baritone Leon Kosavic. Soprano Máire Flavin was more variable, and did not always match the clarity of articulation of the other singers.

In Tod und Verklärung Stutzmann delivered as thrilling an account of Strauss as I have ever heard from the orchestra. All the music’s tender intimacy, high drama and pathos were faithfully captured in a performance that will stand as a high water mark.

Stutzmann’s next NSO appearance is on February 23rd, when the programme will include Beethoven’s Fifth Symphony, Elgar’s Cello Concerto (with Alban Gerhardt as soloist) and the overture to Lalo’s opera Le roi d’Ys.