How Dublin became a city of sprawling suburbs

Despite the best efforts to define Dublin city’s image as medieval or Georgian, it's really just a sprawl of vast expanses of suburbs 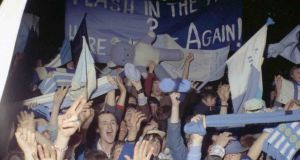 “Heffo’s Army” celebrate the All-Ireland victory of 1976. Virtually all of Dublin’s starting 15 in the 2017 football final were drawn from clubs throughout the suburbs rather then the inner city

Dublin nestles in a bay. Much of the topography of the city and its environs – the hill of Howth, or the Dublin and Wicklow Mountains – is substantively the same as it was over a thousand years ago, and can perhaps give a sense of what an early traveller, or sailor, or raider, might have seen as they prepared to make landfall.

What has changed dramatically is the impact of human settlement. The earliest surviving map of Dublin – that of John Speed, published in 1612 – depicts a city that is barely recognisable today.

Over a century later, in 1728, Charles Brookings depicted a city that can still largely be discerned in the inner city of the 21st century; and despite the reworking carried out over time by property developers and institutions such as the Wide Streets Commissioners, the size and central streetplan of Dublin remained remarkably static up until the twentieth century.

Apart from Victorian outliers like Rathmines, Ballsbridge or Clontarf, Dublin was largely confined within the limits eventually defined by the circular roads and the Grand and Royal canals up to the 1920s.

This changed after independence. The nature of that change was suburban expansion, which leads to a point recently made by the historian Erika Hanna: that Dublin is a city that mainly dates from the middle of the 20th century.

Despite the best efforts of the city fathers, tourist authorities and developers to define the image of Dublin as medieval or Georgian (the eras whose material legacy was most endangered by the redevelopment of the city in recent decades), the bulk of the modern takes the form of the vast expanses of suburbs constructed after independence. If there are indeed multiple versions of a city, then the suburbs are by far the largest and most well-populated version of Dublin.

They are fragmented and come in many forms; the leafy Victorian roads of Donnybrook or Clontarf are worlds apart from many of the late 20th century suburbs, in more ways than one.

We live in a society in which social class is often defined by something as basic as an address. There is nothing unusual about that, sadly, but Dublin’s suburbs offer acute delineations of the extremes of wealth and poverty.

The inner city has long been chronicled in terms of both its Georgian splendour and Victorian decline, and the generations prior to independence witnessed regular calls to address the latter.

The two go hand in hand; and the belated clearing of many of the inner-city slums helped to populate the new “towns” on the rim of an expanding city.

After independence, there was an official awareness that Dublin had prestige, that it had remained important and could be a key driver of the Free State’s economic development. New industries began to be established (such as tobacco factories in Glasnevin and the South Circular Road) as Dublin became a hub for economic expansion during the 1930s.

While Cumann na Gaedhal displyed little enthusiasm for tackling the long-running horrors of the infamous tenements, Fianna Fáil took to this with relish. New flats were constructed across the inner city from the 1930s onwards, but they were relatively expensive structures and eventually they gave way to suburban development as a means of tackling Dublin’s perennial housing problems in the 20th century.

The 1930s also saw that process begin, with the creation of Crumlin and Kimmage. The people who came to live in these new areas were often the relocated inhabitants of the “old” city, making the journey, as Brendan Behan would have it, to “hell or Kimmage” along a road literally mapped out by municipal authorities who often assumed that they knew what was best for the human subjects of their planning. Concerns about the lack of adequate services and infrastructure became running sores in what were, to all intents and purposes, new towns being built from scratch.

Recent history is still history. Much of the history of suburban Dublin remains to be written (though historians like Joseph Brady and Ruth McManus are pointing the way). From the 1970s onward, urban history – with the arc extending from the popular works of Eamonn Mac Thomáis to high scholarly studies of Viking and Georgian Dublin – remained firmly focused on the city centre. Dublin was represented as somewhere between Pimlico and East Wall.

It was not until the 1980s that the lived reality of life in the suburbs began to find expression in literature as Dermot Bolger set his early novels in and around Finglas and Roddy Doyle’s Barrytown trilogy took place in a fictional sprawl of estates bearing a certain resemblance to Kilbarrack.

Such places were new additions to the city, yet they are inextricably part of it. While it is easy to become fixated on what remains between the canals, it can also be misleading to think of the suburbs as a city around the city.

Dublin has its fair share of cliches, such as the nostalgic recourse to eccentric “characters” as emblematic of 20th-century urban life. The very existence of such notions hints at a desire to locate and participate in some kind of essentialist Dublin identity. To go down this path, and to contemplate what it might mean to be a Dubliner, is surely to engage in navel-gazing.

A Dubliner is surely just someone who lives, works, and makes their lives in Dublin, as broadly defined as the old city and its suburban hinterland (a region that by 2011 contained half the population of Leinster).

The growth of the GAA in the capital is a case in point. The new 20th-century suburbs were tailor made for the association to expand in the capital, by offering undeveloped land on which pitches could be built. Virtually all of Dublin’s starting 15 in the 2017 football final were drawn from clubs throughout the suburbs rather then the inner city.