Boldly going where no girl has gone before

The Bold Girls project is a celebration of women writers, artists and their fictional counterparts to mark the centenary of female suffrage in Ireland 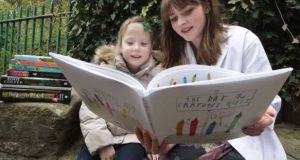 In the arts world, much as in the business world, there is a useful rule of thumb: expect everything to take twice as long as you think it will (and cost twice as much).

So upon hearing of the Bold Girls project that the intrepid team behind Children’s Books Ireland will launch on March 8th, 2018, International Women’s Day in the year of the centenary of (admittedly a select group of) women in Ireland and the United Kingdom gaining the right to vote in national elections – one rather reasonably assumes that it’s been in the works for a while.

The Bold Girls project is a celebration of women writers and artists as well as their fictional counterparts, and CBI director Elaina Ryan confirms that it has indeed been in the works for a while. “Bold Girls was something the CBI executive had been thinking about for quite some time, but there was never the time or indeed the funding to make it work. When the Arts Council’s Open Call funding reopened earlier this year, with a brief to fund projects of ambition and scale that are outside of the remit of currently funded arts organisations, we jumped at it.”

Ryan, like many others in the children’s books world, was conscious of the timing: “The centenary of Irish women’s suffrage, for householders and those over 30, was further impetus to bring the project to fruition,” she acknowledges.

Autumn 2017 has already seen two significant novels about the Irish and British suffragist movements published – Sally Nicholls’s Things A Bright Girl Can Do and Sheena Wilkinson’s Star By Star – alongside various nonfiction titles exploring the importance of heroines and role models in science, exploration, politics, the arts and more. Bold girls are – loath as we may be to phrase it thusly – on trend at present.

What is significant about CBI’s endeavour is that it is – like many of their projects – incredibly collaborative. Ryan notes that part of the application process – despite ultimately being unsuccessful – involved speaking to a huge number of potential partners. “Every phone call and email we sent was met with huge enthusiasm, and it’s because of that, that despite not being successful at Open Call, we’re making the project happen on a smaller scale. Dublin Unesco City of Literature has been hugely supportive, and it’s through funding from them that the Bold Girls reading guide is possible. Further support of various kinds will come from Dublin City University, Trinity College Dublin and KPMG.”

The title is inspired by the 2017 International Women’s Day slogan: Be Bold for Change. “Being bold in Ireland, of course, has a fantastic double meaning – not just indicating bravery, boldly going where no girl has gone before, but bringing a sort of mischief and spirit to the project,” Ryan says.

The project includes live literature events (in conjunction with schools, festivals and other venues) and a Bold Girls exhibition of texts in Trinity College Dublin. One of the most important resources will be the Bold Girls Reading Guide, which Ryan explains will be “a similar format to our annual Inis Reading Guide – divided into sections by age, from board books to older YA, including books in Irish, poetry and non-fiction.”

The guide will be edited by CBI's Jenny Murray with Kim Harte (future CBIer) as research editor, whose years of experience as a bookseller and CBI “book doctor” (providing bespoke book prescriptions to children) make her an ideal candidate; Claire M Dunne will serve as Irish language editor and Dr Patricia Kennon at Maynooth (formerly Froebel) will concentrate on academic texts.

“Whether fictional or historical,” Ryan says, “we want to celebrate strong, confident, intelligent, brave women and girls in children’s and YA books, giving them much-needed visibility alongside their male counterparts.”

Submissions have also been invited from publishers, concentrating on both recent texts and classics, and the guide will also feature “20 extraordinary Irish women who write or illustrate for children”. It should be emphasised, though, that this is a project not just for one half of the population.

Bold Girls, as Ryan explains, “is about girls and women in children’s books and in the arts, but it’s for boys and girls, for young men and women in equal measure.” She points to the frustrating tendency of many adults to assume that boys won’t read about girls, shaped more so by their own stereotyped notions of gender roles than the possibilities easily embraced by younger readers.

“We’re now seeing picturebooks with female scientists and male nurses, with fathers caring for children and girls being ambitious in STEM-related subjects, as well as people of colour, BAME [Black, Asian and Minority Ethnic] protagonists, and later, people whose sexuality and gender are fluid – would that all this weren’t remarkable. We need to start at the start with books for the very young if we expect our boys and girls to be open to different kinds of stories.”