After a multimillion-euro renovation, the arts institute is ready to spearhead a renaissance 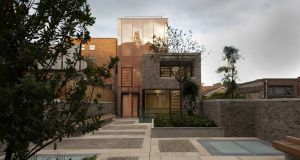 After a major redevelopment and expansion, the Goethe-Institut Irland’s Georgian Headquarters at 37 Merrion Square, Dublin 2 has reopened

In Hollywood’s case, option three is actor Mark Wahlberg. In Germany’s case option three, across the road at 37 Merrion Square, is the Goethe-Institut.

After a multimillion-euro renovation, a jewel has returned to the crown of Dublin’s cultural institutes, shining brighter than before.

The Goethe-Institut’s renovation and expansion in its Georgian townhouse raises the bar for historic renovations in Dublin. Now it wants to spark a renaissance in thinking about cultural politics in Europe’s age of anxiety.

This comes at a welcome and timely juncture for Ireland as, looking beyond Brexit, it opens new cultural windows towards Germany.

Sitting in his airy office overlooking Merrion Square, Goethe-Institut director Thomas Lier prefers not to discuss how much Germany has invested here, except to say is a “substantial commitment”.

“It’s all about visibility,” he says of the renovated premises. “But visibility can only be a means to an end.”

Founded in 1951 as an association to train foreign German teachers, the Goethe-Institut opened its Dublin centre a decade later. Today it is one of almost 160 centres worldwide named after Johann Wolfgang von Goethe, the poet, politician and author of Faust.

Though financed largely from the German federal budget, rules of engagement from 1976 guarantee its independence from political demands.

“It’s not about ‘selling’ Germany, that’s too Anglo-Saxon a concept for us,” says Dr Lier. “We have no short-term goals; we see our work as a long-term investment that may show results only after four or five years.”

Compared to much of what’s on offer in Ireland’s cultural world, the Goethe-Institut is a luxury liner. Beyond the dozen staff and the building upkeep, the institute operates a library holding 10,000 objects, a remise for teaching 1,000 students German annually and even a new cafe, run by Capel Street’s Camerino Bakery.

The Dublin institute supports exhibitions and concerts, and operates outreach programmes: touring film events for schools and a partnership with Trinity College Dublin to improve language and culture access for people from disadvantaged communities. And all of this in parallel with the German embassy’s own cultural diplomacy efforts.

“We see a world in flux and competition for narratives that we also have to face up to from a European perspective,” she said. “International cultural policy will become all the more important.”

In flying form at the opening was Minister for Culture, Heritage and the Gaeltacht Josepha Madigan. Her years learning German at Mount Anville and Trinity College, as well as time in Vienna, helped her deliver an address – to huge applause – in flawless German.

“In sharing your culture you honour us,” she said, “and it is our privilege to share in Germany our culture with you in return.”

In April the Department of Foreign Affairs (DFA) published its plan for investing in a “wider and deeper footprint” in Germany, part of a wider push to double Ireland’s global footprint by 2025.

There are fresh commitments to boost language teaching and step up German-Irish exchanges at political and civil servant level. A key recommendation, however, is is to hire a full-time cultural officer on a three-year contract to develop arts events, foster new ties and expand existing ones.

Rather than a dedicated cultural space such as the Goethe-Institut, the report instead proposes using event space of the embassy in Berlin, rebranded Ireland House.

So what should any new director – alongside similar figures in Paris, New York and elsewhere – be doing?

The culture system in Ireland, that operates on an annual funding cycle, is far more volatile than in Germany

A survey of Irish citizens in Germany proposed “an increased number of smaller events, a limited number of high-profile events and rotating events annually to different parts of Germany”.

He sees huge potential for greater ties once Ireland understands how culture in Germany is organised: decentrally, at federal level – with museums or opera houses in regional capitals far from Berlin operating at a level comparable to Dublin, Paris or London.

A challenge to closer collaboration, he says, is contrasting cultural attitudes to planning. Many German cultural institutions have multi-annual budgets that are ringfenced, he says, while Ireland thrives on “last minute-ism”.

“The culture system in Ireland, that operates on an annual funding cycle, is far more volatile than in Germany,” he said. “That can be a terrific adrenaline shot to do something quickly, but it is not a helpful basis for planning or building up partnerships.”

Arts Council director Orlaith McBride agrees, saying her organisation’s increased move towards multi-annual budgets is a model that could be extended to any DFA cultural push in Germany and beyond.

If her organisation is Ireland’s arts production factory, and Culture Ireland the shop window abroad, she hopes the new cultural directors will plug into both organisations to act as an effective pivot or broker between arts practitioners at home and artistic organisations around the continent.

“It cannot just be about a piece from here being performed in Germany as a visiting performance company,” she said, “but companies embedding in the cultural infrastructure of Berlin with residencies and co-creation enabled by new cultural directors.”

Listen around Dublin and the welcome for a new cultural push around Europe is shot through with concern, too. Has the DFA put the cart before the horse by looking for cultural directors before communicating clear priorities?

What, exactly, does post-Brexit Ireland want to communicate through cultural policy in Germany and Europe?

Even when funding and mandate are nailed down, the real work begins: how does Ireland propose to go beyond “Irish” events and co-operations to engage with the big questions in continental cultural circles?

The Goethe-Institut’s response is “Freiraum” (free space): travelling around EU cities to explore the idea of European freedoms, just as they come under attack from populist forces. What does Ireland want to say, and how autonomous will the new cultural directors be to depart from the official script?

Will a DFA-funded cultural director be independent enough to fund, for instance, a project that tackles Ireland’s corporate tax regime? Germans’ dim view of legal tax avoidance in Ireland burdens our bilateral relationship like nothing else.

Finally, a full-time cultural director in Berlin is a substantial investment – even without a dedicated premises – but a three-year contract is the blink of an eye. Finding partners in the decentralised cultural world here takes time, and institutions are already programming – and seeking partners – for 2021.

Before Germany or Ireland existed on the map in their current form as sovereign states, they existed as cultural places. Bringing Ireland to Germany, though, means, to paraphrase former chancellor Willy Brandt, the Irish have to learn to speak – and think – Deutsch.

Swiss cultural promotion is centred around Pro Helvetia, a publicly funded arts council which operates autonomously of the federal government.

With an annual budget of 40.3 million Swiss francs (€35.4 million), it is a foundation employing 94 people in Switzerland and abroad.

Pro Helvetia runs the Centre Culturel Suisse (CCS) in Paris and finances the cultural programmes of the Swiss Institute in Rome (ISR) and the Swiss Institute in New York (SINY). In addition it has liaison offices in Cairo, Johannesburg, New Delhi, Shanghai and Moscow – each with around five staff. Their task is to promote Swiss culture through exchange, residences, readings, concerts and more.

“London only started in January but it is already working very well; Berlin is too soon to be evaluated,” he said. “What’s important is that our staff in the regions are all locals, not Swiss.”

The other defining issue for Pro Helvetia is its autonomy: free of political steering or foreign-ministry funding.

“It’s of huge benefit,” he said, “when people know we are a politically independent, autonomous arts council.”

35 of the best independent bookshops in Ireland
8