A Star Is Born: Lady Gaga is exotic when she’s ordinary and rooted when she’s fantastic

Review: The first hour is as funny and romantic as any mainstream film this decade 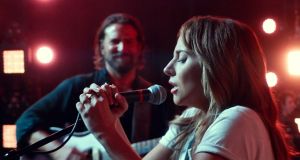 Bradley Cooper and Lady Gaga in A Star Is Born. Photograph: Warner Bros. 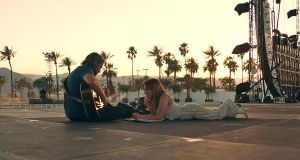 Bradley Cooper the actor is in top gear. He also directs

Film Title: A Star is Born

Of course, we don’t “need” another version of A Star is Born. We don’t actually “need” beer, sausages, kittens or love. But the latest unveiling of the old warhorse – the fifth, by one measure – is so persuasive it takes on the flavour of necessity. Why would anyone choose to live in a world without it?

Bradley Cooper, embarking on his directorial debut, has made the eccentric decision to re-enter the milieu of the least successful version. Like Barbra Streisand’s infamous 1976 vanity project, the current A Star is Born is set in the world of rock ’n’ pop. Maybe that choice reflects a permanent shift in the celebverse; maybe we no longer get movie stars so celestial as Judy Garland in George Cukor’s 1954 incarnation.

We most certainly do still get pop stars of Lady Gaga’s magnitude, and the sometime Stefani Germanotta exceeds all expectations as the talented working-class ingénue propelled to fame by Cooper’s soused rocker.

Comparisons with Garland, Streisand and Janet Gaynor are pointless, but – if you care about such things – Gaga can stake a claim to be the most convincingly ordinary of the gang in her film’s opening sections. This is all the more impressive when you remember that her ladyship was raised on another planet.

We begin as we have begun for over 80 years. Jackson Maine (Cooper) and his band, hard-edged country rockers, finish a successful gig, and, liquored up, he heads into the city for yet more lubrication. No blue-jean bigot, Jackson ends up at a drag bar where he is knocked sideways by guest-act Ally’s version of La Vie en Rose. They smooch.

She complains about the size of her nose. He removes her make-up and marvels – as we are meant to marvel – that somebody other than stage Ally (or Lady Gaga) lurks beneath. Mentoring begins.

As her blue-collar, bridge-and-tunnel dad (a delightful turn by Andrew Dice Clay) learns of the connection and pushes her to grasp the opportunity, Gaga gets to briefly occupy the same shallows as Liza Minnelli’s character in Arthur (the Garland family are never far from our thoughts).

That first hour is as funny and romantic as any mainstream picture released this decade. Leaning into Cooper like a bird investigating promising movements among the undergrowth, Gaga is exotic when she’s ordinary and rooted when she’s fantastic.

Jackson’s ever-attendant addictions point towards later miseries. This is the first version of the film made when such dependencies are accepted as illness. The film treads a thin line here. A rumbling, subtle Sam Elliot, playing Jackson’s much older brother, is on hand to explain the family pressures that pushed the rock star in the wrong direction.

But a later conversation places the responsibility back on the addict. Made-up in the red-brown, leathery skin that so often encases life-long alcoholics, Cooper only occasionally allows bitterness to seep through his neurosis and self-disgust.

Bradley the actor is in top gear. Bradley the director is a less conspicuous presence, but nobody could question his professionalism. Using much hand-held camera, rationing the bravura shots to key emotional pivots, he proves equally confident with the intimate exchanges and the blaring musical showcases.

Never mind that Jackson looks to have had a career more suited to someone at least 20 years his senior – the Allman Brothers perhaps– the rock songs still sound authentically aged. Gaga’s pop tunes are equally convincing.

A Star is Born offers evidence that there is still a corner of the entertainment industry that belongs to cinema alone. This delightful melodrama would make no sense as a TV series.

It will play well enough when it arrives as the big Christmas telly event of 2019 (if there still are such things), but it is made for a big screen, big sound and the comforting sorrow of the communal sob.

Maybe we really do need another version of A Star is Born.