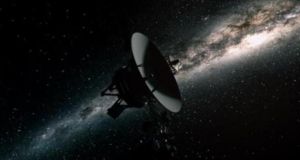 Emer Reynolds says that waking up in New York this morning to more than 500 Twitter and text messages, after scooping an Emmy last night for her documentary The Farthest, was like winning all over again.

The Farthest: Voyager in Space won the Emmy for outstanding science and technology documentary at yesterday’s 39th News & Documentary Emmys. The Irish film tells the extraordinary story of one of humankind’s greatest achievements, Nasa’s Voyager space probes, and celebrates the magnificent machines, the men and women who built them and the vision that propelled them farther than anyone could have hoped.

Reynolds says she is “really honoured for the whole team. Not all of them could come. It was a really small, dedicated, hard-working and invested team”, which “gave so much heart and soul”. It was a joy to work on the film, she says, “tackling science and space not just with facts but with wonder, awe and emotion, and pulling people along with the joy and invention of it”. It deals “primal questions of why we are here. The team took that to heart and came along with me on an amazing dream.” She describes The Farthest as “a good-news story about the wonder of science and the joy of discovery, when science is under attack”.

John Murray, one of the film’s producers, accepted the award, along with Reynolds and his coproducer Clare Stronge. Onstage he said: “This is overwhelming. Thank you so much, Voyager. It’s  such an incredible achievement and such a privilege to make... We’re a small company from Ireland, and to be allowed to make this film was just unbelievable.”

Reynolds told The Irish Times that even before winning it was “wonderful to be nominated and to be here with some of the team, in full celebration of the work and the joy of making the film, even before they called our name”.

The programme’s backers include PBS, Screen Ireland and Tangled Bank Studios. The Emmy is a real stamp of quality, Reynolds told The Irish Times, and having “‘Emmy-winning director’ or producer on the top of your CV” is a boost. She joked that one of the crew had asked, “Do our rates double now?” “We wish!” Reynolds replied.

Reynolds is in preproduction for a documentary about Phil Lynott – “a far cry from space and science” – that she hopes will be finished for the summer of 2019; the Thin Lizzy frontman would have been 70 next August.

James Hickey of Screen Ireland says: “Huge congratulations to Emer and John. Irish creative feature documentary making is going from strength to strength over the last number of years, and Emer Reynolds is one of the best creative documentary directors working in the business. Major creative documentaries on this scale are incredibly difficult to finance and to produce, so a major award like this will hopefully help that process.”