Don’t judge a book by its coverage

Donald Clarke: BBC’s ‘novels that shaped our world’ list is terrible in a very particular way 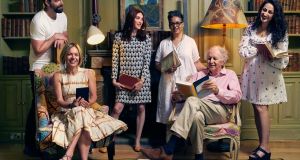 Obviously, the BBC’s list of “100 Novels that Shaped Our World” is terrible. All such lists are terrible. Each one generates complaints of (from one direction) “elitism” or (from the opposite wing) “dumbing down”. The current list is, however, a very modern sort of terrible. It strives for an “inclusivity” that can never be achieved when, by definition, all but 100 books have been left out.

Let’s put it another way. The list doesn’t include Ulysses. It includes none of Joyce’s novels. Well, space had to be made for MM Kaye’s The Far Pavilions and Helen Fielding’s Bridget Jones’s Diary. What are you going to do?

The tone is set by a nauseating photograph of the judges that looks to argue that: “Hey, reading can be fun, kids!” The likes of Stig Abell, editor of the Times Literary Supplement, Mariella Frostrop, reliable culture stalwart, and Alexander McCall Smith, cosy crime writer, grin maniacally in a book-lined room, while clutching hard-back volumes. “I have been so improved by Walter Scott’s Ivanhoe,” Syima Aslam, director of the Bradford Literary Festival, might well be chuckling. “I can’t wait to get back into Terry Pratchett’s Discworld,” Kit de Waal, author of My Name is Leon, almost certainly isn’t replying. Shops run similar grinning-maniac snaps to accompany the latest promotional book club. Who smiles at an unopened volume that way? A person with a clean conscience who has just discovered they’re on this week’s This is Your Life, perhaps. Nobody else.

Launched in support of a BBC2 series called Novels that Shaped the World, the list seems, at least in part, to be playing to that book-club mentality. Formidable novels are in a minority. Page-turners that can be easily read when stirring soup abound. Never mind Ulysses. You will search in vain for Gravity’s Rainbow, Tristram Shandy or Moby-Dick. At least one of these judges felt it was worth including the Twilight Saga, but, it seems, none argued sufficiently strongly for the inclusion of Iris Murdoch or Barbara Pym. Too fusty and dusty? You wouldn’t catch either of those writers laughing uproariously while clutching a copy of Ken Follett’s Eye of the Needle (really?).

Ask the organisers for chopped liver and they may, perhaps, serve you Flann O’Brien or Samuel Beckett (what are they?)

All this would ring more cleanly if the commitment to populism was total. If they’d gone for some linguistic atrocity such as the “nation’s most unputdownable reads” and stuck rigidly to their task then the ground would feel more secure. But a healthy smattering of Booker nominees and 19th-century essentials balances the fat airport doorstoppers.

George Eliot’s Middlemarch occupies the same space as Jilly Cooper’s Riders. Charles Dickens’s Our Mutual Friend competes for attention with Roald Dahl’s The Witches. It doesn’t feel as if anybody is in charge here. The desperation to cover most corners without scaring off timid readers risks rendering the chart even more pointless than such things normally seem.

To be fair, the inclination towards diversity is welcome and only a thug would complain about the wide ethnic spread. Despite limiting themselves to texts in English, the judges have – as earlier BBC generations might not – found space for authors such as Chimamanda Ngozi Adichie, Chinua Achebe and Yaa Gyasi. Despite the cretinous exclusion of Joyce (hey, I’m allowed my own unreasonable view), Irish authors are not in short supply. Edna O’Brien, Sebastian Barry and Kevin Barry are all included. Ask the organisers for chopped liver and they may, perhaps, serve you Flann O’Brien or Samuel Beckett (what are they?), but they do seem aware we know our way around a keyboard.

This list seems, nonetheless, doomed by its stubborn refusal to pick a side. The better class of literary critic can fold the high-brow in with the low when allowed sufficient space to stretch out across the page. Click-bait lists don’t work that way. Anthony Burgess came close to making sense of such a balance in his essay Ninety-Nine novels. That (highly recommended) list was as happy enjoying Goldfinger as it was puzzling over Finnegans Wake. Burgess’s trick would have been harder to pull off in the Age of Instant Digital Fury. We need to know whether we’re furious about the chart being too dumb or too snooty.

Film offers an educative example. Everyone knows what Sight and Sound’s decennial poll is doing. It gathers together critics to confirm that Tokyo Story, Citizen Kane and Vertigo are among the best five films ever made. The canon still stands. All is right with the world. This other nameless film magazine reminds us that, for different sorts of fan, Christopher Nolan is our greatest genius and that movies began in 1970. They’ve both picked a side.

No amount of chuckling like a nincompoop will untangle the crossed allegiances in the BBC list. Pick a bleeding side. Have I made my point?