A new Repeal the 8th mural by street artist Giant Sigh, commissioned by the Irish Council for Civil Liberties (ICCL), has been unveiled in Dublin at Bang Bang café in Phibsboro. 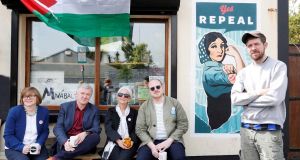 A new Repeal the 8th mural, commissioned by the Irish Council for Civil Liberties, was unveiled in Dublin today, as the council said censoring art is “highly questionable” legally. The mural by street artist Giant Sigh, at Bang Bang café in Phibsboro, calls for a Yes vote and is of a figure combining Lavery’s Cathleen Ní Houlihan, familiar from the old pound note, with Rosie the Riveter, the second World War symbol of working women, complete with a Repeal tattoo on her arm.

The council presented the mural alongside a statement of its interpretation of Irish and European law relating to freedom of artistic expression during the pre-referendum period (see iccl.ie), following a “worrying trend” towards censorship and the “inappropriate use” of the Charities Act 2009.

Speakers at the mural event today included poet Paula Meehan, Cian O’Brien of Project Arts Centre, Orla O’Connor of Together for Yes, and a representative of the SUBSET artistic collective, whose create vibrant murals.

O’Brien, who was forced to remove a Repeal the 8th mural by Irish street artist Maser from the front of Project Arts Centre in Dublin, spoke at the unveiling of the new mural: “I feel we are only at the beginning of a longer conversation about how, at a time when good governance and leadership are important, organisations working in the creative space can ensure artists can continue to make and present work which challenges, inspires and ultimately can lead to change.”

The Project mural was painted over, in an act of “defiant compliance” after the Charities Regulator told the arts centre, a registered charity, to remove the mural because it was deemed to constitute “political activity”.

Irish Council for Civil Liberties, an Irish non-profit which supports civil liberties and human rights, said it was concerned at the “chilling effect” of decisions to remove Maser’s Repeal the 8th mural at the Project Arts Centre in Dublin, and to drop a discussion on a new book on the repeal campaign from Dublin’s International Literature Festival.

The council, which is advocating a Yes vote in the referendum, also cited difficulties encountered by Grace Dyas and Emma Fraser in presenting a touring theatre piece Not At Home, which incorporates testimonies from Irish women and is designed to be accessible to all sides.

The council says it firmly believes use of the Charities Act 2009 to censor artistic expression was an inappropriate use of that legislation and “highly questionable from a legal perspective”.

Council executive director Liam Herrick said: “Freedom of expression is a fundamental right in any free society and artistic freedom must be afforded the highest protection. The role of the artist in challenging power and orthodoxy is the very lifeblood of our cultural life.”

While it was necessary to regulate election spending, “under the Irish Constitution, freedom of speech is not equivalent to freedom to buy advertising or column inches,” he said.

Dublin City Council has argued that is prohibited under the Act from giving financial support to events involved in the referendum campaign.

Mr Herrick noted the 1995 McKenna v An Taoiseach ruling prohibited Governments spending public money promoting a referendum result. However, “in our view, the McKenna decision outlaws the use of public funds to support the Government’s own campaign for a Yes or No vote. This is not the same as using public funds to support free discussion of artistic work containing ‘political’ ideas that are relevant to a referendum”.

Over the past month a number of arts organisations cancelled invitations to Dyas and Fraser to present their touring theatre piece.

Not At Home was presented in Limerick as part of Eva international biennial, in a private venue in Athlone, and at the publicly-funded Glens Centre in Manorhamilton.

But in Galway a publicly-funded organisation and two private venues pulled out of plans to present it.

Not At Home was to open at Crawford College of Art and Design’s gallery (in partnership with UCC and Cork Opera House) but the invitation was withdrawn at a late point.

Responding to queries, the college said hosting it was inappropriate because “as a publicly-funded body we need to be conscious of our duty to maintain and portray a neutral position”.

It cited Charities Regulator guidelines and a wish not to “jeopardise” its charitable status or “become a focus for such controversy or be seen to be advocating for one side”.

The council, which is a member of Together for Yes, plans to unveil a mural it commissioned by street artist Giant Sigh, at Bang Bang café in Phibsboro, calling for a Yes vote, on Friday.