‘Your sales go up by about 1,000 per cent in the first few days after you get longlisted!’

Anna Burns, Donal Ryan and Sally Rooney react to being longlisted for the Man Booker Prize 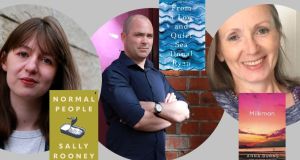 “Telling stories is our way out of the darkness a lot of the time,” says author Donal Ryan. Ryan and fellow Irish writers Sally Rooney and Anna Burns have been longlisted for this year’s Man Booker Prize.

Ryan and Rooney spoke with RTÉ’s Morning Ireland about their nominations.

Ryan was previously longlisted in 2013 for The Spinning Heart. The novel garnered him both the Guardian First Book Award and the Irish Book of the Year. On his current nomination, he says: “I never dreamt that I’d be nominated in the first place. For it to happen twice, it was pretty unbelievable.”

Rooney won the PFD/Sunday Times Young Writer of the Year Award 2017. This is her first nomination for the Man Booker Prize. “It was quite a surreal, a strange feeling,” she says.

She has been nominated for her upcoming novel Normal People, which spans a period of four years. It tracks the lives of two protagonists from their final year of secondary school up until their final year at university.

Ryan is longlisted for a Low and Quiet Sea. The novel follows the lives of three different men – a Syrian immigrant, a bus driver in Limerick and a retired political lobbyist. In the last section of the novel, their lives converge.

The Syrian character was inspired by actual events. “It’s a story with a kind of sickening ubiquity, but it was a specific news story about a doctor who paid pretty much all of his life savings to get his wife and daughter across the Mediterranean with disastrous consequences. So I suppose I did kind of appropriate his story for the novel,” Ryan says.

Rooney is enthusiastic about the inclusion of young writers such as herself on the longlist. However, she feels this is due in part to the current literary culture and the subjective taste of the judging panel. “It’s obviously really exciting for someone like me to see other people of my age bracket on there, other young writers who are doing such fantastic and interesting and exciting work. It’s obviously just a subjective thing from year to year. You’re going to see a lot of variation,” she says.

As this is not his first nomination, Ryan is aware of the prestige attached to a Man Booker nomination. “You see your sales go up by about 1,000 per cent in the first few days after you get longlisted!”

Both authors hope to keep busy rather than ruminate on what September will bring.

This is particularly true of Rooney whose book has yet to be released. “I’m in the high anxiety of actually waiting for the book to be published as well as the longlist. So I’ll try and focus on actually getting the book out into the world above anything else!” she says.

Anna Burns was at home, about to practise her daily meditation, when her agent contacted her with the news of her longlisting. “The meditation went out the window after that,” she said.

She is very happy to be nominated. “Speaking short-term, I heard that within a day sales of Milkman went up. In monetary terms that’s an impact. Publishers will definitely like that sort of thing and might then be accommodating if I should go to them a wee bit later with some sketchy, hare-brained plan of possible further work and say, ‘How about you give me money to write this?’

“Also, I received notes and phone calls of congratulations from friends and people in the trade, going back years too, from individuals I’d lost touch with. That’s lovely. I mention that because when I’m happy, I do everything better - including writing books, and writing books is what my career is supposed to be.”

This is not the first time Burns has benefited from a prize nomination. Her debut, No Bones, was shortlisted for ther Orange Prize, now the Women's Prize for Fiction, back in 2002.  Did that affect her career?

“I’ll say! Writing is a challenging profession in terms of keeping oneself - at least for most writers. So, being shortlisted for No Bones enabled that to happen for a while. Also, in terms of art, I find any good news or acclaim coming my way is always going to help spirits soar which then feeds positively into the next creative endeavour.”

How would she describe her novel, Milkman?

“The novel covers two months during which a teenage girl tries to evade the sexual advances of Milkman, a middle-aged paramilitary. As isolating as this is for her, she finds herself also up against the unstoppable sexual gossip about her and Milkman in her enclosed, claustrophobic environment where state law is viewed as corrupt and over which paramilitaries hold sway.”

Does she consider herself to be an Irish writer?

“I consider myself a writer. If you want to break that into categories of writer, then Irish writer would be one of them. I’ve also been told I’m a fiction writer, a literary writer, a funny writer, a scary writer, an experimental writer, an historical writer, a good writer, a bad writer, a unique writer, a shocking writer, a ‘who would have thought she had it in her’ writer. Aside from writing and to get back to the Irish thing as opposed to the writer thing, I’ve lived in England three decades and I’ve yet to meet with anyone here on a personal level - not just a British Islander, but anyone from anywhere - who automatically does not assume I’m Irish.”

The shortlist of six books will be announced on September 20th. The winner will be revealed on October 16th.