How the building of Ardnacrusha turned from scepticism to triumph

Local history roundup: A portrait of the colourful characters of Portumna and the brutal lives of 19th century Ireland 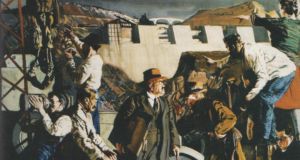 Night’s Candles Are Burnt Out: Seán Keating’s painting of the construction of the Shannon hydroelectricity plant. On loan to the ESB with kind permission of Gallery Oldham, UK

The Shannon hydroelectric scheme at Ardnacrusha in the 1920s involved harnessing the power of the river to generate electricity. It was a huge project undertaken by a German firm, Siemens-Schuckert, involving several thousand local men and a thousand Germans working three shifts a day for four years. The absorbing story of its construction is told in Powering the Nation: Images of the Shannon Scheme and Electricity in Ireland (Irish Academic Press, €29.99) by the design historian Sorcha O’Brien.

The Ardnacrusha scheme started in August 1925 – just two years after the end of the divisive Civil War – when Ireland was beginning to develop as a modern country. For such a fledgling state in the formative years of nation building, the development of the scheme was regarded as progress on a heroic scale. The ESB, the first of the Irish semi-State companies, was set up in 1927 to manage the project, which was completed in August 1929 and was a unique building of the time.

But the work was not without anxiety in a country that was deeply suspicious of technology. A large section of the government condemned the idea, the leading technical men – with a few exceptions – were antagonistic and the press was mostly hostile. O’Brien has tapped into extensive archives to produce a highly visual book reproducing technical drawings, photographs and silver gelatine contact prints. One chapter is devoted to artistic visions and explores the emotive work of Seán Keating, who used paint, charcoal, pencil, oil and watercolours, and produced the powerful, allegorical composition Night’s Candles Are Burnt Out.

For five years, John Joe Conwell has carried out meticulous research to produce a variegated picture in Portumna: A Galway Parish by the Shannon (€50). Resolutely curious, he has immersed himself in many subjects, wrapping up the town’s storied past with thematic chapters on politics, religion, farming, culture, education, music, entertainment, sport and the river, producing a complete portrait of parish life.

Portumna, which came into existence as a market town granted by charter to the Clanricardes – a powerful family connected to British royalty – is a place that has historically always punched above its weight. Between 1610 and 1618 the family built Portumna Castle, mainly for strategic reasons to control the Shannon, which in those days was a main highway through Ireland. The 14th earl of Clanricarde (1802-74) was a cabinet minister and ambassador to Russia. Around the time of his death the family owned 52,000 acres of land, including Portumna town, as well as collecting rents from Loughrea, Craughwell, Oranmore and Galway city.

Colourful characters emerge at events such as fair days and agricultural shows. Msgr Timothy Joyce was a leading figure in the middle decades of the 20th century who immersed himself in all aspects of parish life, improving the appearance of the town with flower boxes long before the Tidy Towns competition was introduced. Weighing in at 3kg kilograms, with 860 pages and 1,000 photographs, many of them in colour, this is a book to pick up with both hands. It ranks as the definitive account of the town’s past and is a fine piece of bookmanship.

The Annals of the Poor: Scariff Workhouse Union Counties Clare and Galway 1839-1851 (€18) is compiled in the form of a diary by Gerard Madden, an energetic historian who has written widely about Lough Derg and east Clare. Notes and entries focus on the harsh lives of the penniless and destitute people who had rags for clothes and just a few potatoes to survive on. They lived in hovels and paid exorbitant rates to landlords whose only concern was their own.

Although little was known about the potato blight in 1845, by May the following year the Freeman’s Journal visited Killaloe and O’Briensbridge showing, through powerful description, that starvation existed for miles around. “The houses along this district are filthy and horrible . . . It is impossible to conceive how so many human beings as I have beheld in almost all of them worse than Indian wigwams exist in such a space as they occupy.”

Newcastle West in Close-Up: Snapshots of an Irish Provincial Town (Newcastle West Historical Society, €30) provides a glimpse of the business life of a small town through evocative postcards, billheads and black-and-white photographs, some from the Lawrence Collection. The main commercial activity was carried on in the Square, where butter and turf markets were held. One striking photograph shows Michael Collins inspecting Michael (Brick) Sheehy in August 1922, shortly before he was killed at Béal na mBláth.

A street-by-street traverse reflects the town’s diverse trades. These included ironmongers, victuallers, hardware, grocer and Italian warehouseman, auctioneers and shipping agents, and Nash’s mineral water, famed for its red lemonade, and one of Munster’s largest firms.

Paul Clements is a contributor to the new edition of The Rough Guide to Ireland.

The Goop Lab: One episode is about the vulva. I’ll probably watch that with my parents
3 Welcome to the child sex capital of Europe
4