Review: Jaron Lanier’s book rails against the deliberate undermining of our free will 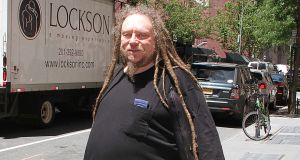 We’re not all looking at the same internet. This might seem a self-evident observation to some, but of all the points Jaron Lanier makes in his new book – the prosaically but effectively titled Ten Arguments for Deleting Your Social Media Accounts Right Now – it’s the one that resonates most.

When we go online, Lanier maintains, we’re like the blind men brailling different parts of the elephant. Some of us see a tree trunk, others a snake. Stasi-like surveillance and data harvesting ensures our Google search returns and Facebook feeds – the doors of digital perception – are so massaged by algorithms that we get an utterly customised, subjective view of what we once assumed was a consensual, objective space. Worse, market-targeting has morphed into a remote form of commercial profiling, with nanobots manipulating our moods so that we click more, like more, hate more, buy more.

“Now everyone who is on social media is getting individualised, continuously adjusted stimuli, without a break, so long as they use their smartphones,” Lanier writes. “What might once have been called advertising must now be misunderstood as continuous behaviour modification on a grand scale … This book argues in ten ways that what has become suddenly normal – pervasive surveillance and constant, subtle manipulation – is unethical, cruel, dangerous, and inhumane.”

We are, Lanier proposes, locked in an echo chamber that keeps shrinking, and if that conjures images of the Death Star’s trash compacter, so be it: social media is no longer merely antisocial, it’s downright sociopathic, creating psychic dissonance and compromising our very humanity.

All perfectly dystopian, but Lanier, a former Silicon Valley pioneer, internet evangelist and one of the authors of cyberspace’s source codes (as well as defector’s testimonies such as You Are Not a Gadget and Who Owns the Future?) knows what he’s talking about. Over the past decade he’s become, if not quite a whistleblower, then one of the culture’s most prominent technology Cassandras. One is reminded of those old Cold War warriors who feel the need to confess state secrets before they die. And he’s not alone. Consider this quote from Chamath Palihapitiya, former vice-president of user growth at Facebook:

“The short-term, dopamine-driven feedback loops we’ve created are destroying how society works … This is a global problem … I feel tremendous guilt.”

Ten Arguments is simple and straightforward in structure, more akin to a boardroom presentation than an academic thesis. Social media, the author contends, undermines our free will and makes us complicit in the insanity of the times. It compromises the very notion of truth and renders public discourse meaningless. It destroys the human capacity for empathy, makes us unhappy and corrodes the soul. It keeps us poor and subverts politics. And (my favourite), it makes us behave like assholes. It’s also an addiction:

A Bummer and an ABC

All social media’s ills, Lanier claims, can be umbrellaed under the acronym Bummer: “Behaviours of Users Modified, and Made into an Empire for Rent.” This Bummer machine is made up of six parts, indexed by the following mnemonic: A for Attention Acquisition leading to Asshole supremacy; B for Butting into everyone’s lives; C for Cramming content down people’s throats; D for Directing people’s behaviours in the sneakiest way possible; E for Earning money from letting the worst assholes secretly screw with everyone else; and F for Fake mobs and Faker society.

But Lanier is less a back-to-the-land Luddite than a technology gnostic. He’s also a capable writer, rendering complex issues in plain language without compromising on nuance. Not all his arguments are sound (a swipe at anti-vaxxers fails to adequately address reasonable concerns about infants receiving exponentially more inoculations than they did only a couple of decades ago, and he fails to offer any real advice to independent businesses who find social media an invaluable direct marketing tool), but Ten Arguments is on the side of humanity.

Lanier doesn’t want to sabotage the machine; he wants to redesign it according to better specs. In an age of hysteria and hyperbole, his is a welcome voice of moderation and reason.