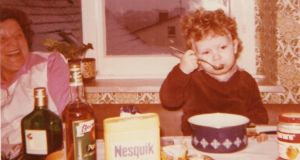 Marcel Krueger as a boy with his grandmother Cilly

As a boy growing up during the Cold War in a small town in West Germany, I dreaded the monthly air-raid siren tests. For me, even though I knew it was only a test, the rising and falling howl signalled that our lives were not safe, that the Red Army could attack us from behind the Iron Curtain any moment, or, worse, send their atomic bombers in. My grandmother, a lively, bubbly personality with a bellowing roar for laughter, did not share my fears. After all, the Russians had already come for her, 40 years before.

Today, the smaller details and histories of the second World War are increasingly vanishing from the public eye, overshadowed by the larger events that define it: the Battle of Stalingrad, the Normandy Landings, and, of course, the Holocaust. What is often overlooked is the fact that the war and its aftermath affected every single family in Europe, from Ireland to the Soviet Union; and that it shaped the world as we know it today, both politically and through the experiences of our parents and grandparents.

My grandmother’s name was Cäcilie, but everyone called her Cilly. She was a very important presence in my life – both of my parents worked when I was small, so for more than 10 years after school I would always stay with my grandparents until my parents picked me up in the evening again. She played with me, helped me do my homework, brought me sweets and books – and told me stories.

On the wall of my grandparents’ dining room was a large framed charcoal drawing of a farm building atop a small hill against a background of low-hanging clouds. I do not remember the first time I asked about the picture, but I remember asking about it often. Depending on who was sitting around the dining room table, the answers varied, but all agreed that this was the farm that had belonged to my great-grandparents in East Prussia, a former area of Germany that was now Poland. It was the farm on which my grandmother grew up and which had to be left behind when the Russians came.

My grandmother often spoke of the farm, and I remember some stories more vividly than others: bringing her brothers cold coffee when they were working in the fields on a hot summer day, sleigh rides through the snow to church, about wolves in the woods. I do not remember when we first talked about Russia, if it was just another story she told one day over lunch. But somehow, over time, it transpired that my grandmother had been captured by the Red Army at the end of the war, and had spent four years in labour camps in the Soviet Union (one of more than 200,000 German civilians used as forced labourers) before she came to West Germany where she met my grandfather Willy. As a child, I believed these stories in the same way that I believed fairy tales.

Sadly, my grandmother is no longer with us – she died in 2009 after suffering from Alzheimer’s in her last years. Nevertheless, her stories stayed with me, so in the end I decided to sit down and retell some of them, and explore the past myself. Especially as I wanted to find out why her experiences during the war and after had not made her bitter, had not turned her into a misanthrope.

I followed her tracks to the east, first travelling to Poland, to the area around Olsztyn where Cilly grew up, and from there took the train via Warsaw and Moscow to Yekaterinburg in the Urals, where she spent most of her time as a forced labourer. Of both the farm and the camps there is no trace left, but what I found instead in Poland and Russia were people open and willing to engage with a difficult and painful European past and with hope for the future: young Polish women who had started questioning why the family home had always been known as the “German house”, Russian students writing their thesis about the Stalinist terror of the 1930s.

I would have not come to Ireland if my grandmother had instilled a fear of the unknown in me, a fear of strangers

On my return, I wrote Babushka’s Journey, about two very different journeys, the one of my grandmother in winter and war towards an uncertain future, and my one on the Trans-Siberian Railway in summer, with a plane back towards Dublin waiting for me at the end.

I also had to fill in the blanks of her story, especially about the details of everyday life in the camps. Therefore, I approached the Zeitzeugenbörse (Time Witness Association) in Berlin, which put me in touch with other women who had been in similar camps in the Soviet Union. These lovely ladies fed me countless slices of marble or cheese cake with cream and served gallons of coffee while talking about their experiences; and with their help and secondary sources I was finally able to tell Cilly’s story between her capture in February 1945 and November 1949 when she arrived in West Germany. The things I write about all happened – I just decided to tell them from Cilly’s point of view in the book.

All families in Germany, Poland and Russia are related in the stories we hear and tell about the second World War and its aftermath. And once you start digging in the past, you find that even today these stories lie just under the surface of every day like hastily buried bodies, their outlines still visible. The more you know, the greater the realisation that there is so much more to find out. The war remains an unending repository of buried memory, which will keep families and historians busy forever.

My favourite historian Tony Judt writes in Ill Fares the Land (2010) that “there is something worse than idealizing the past-or presenting it to ourselves and our children as a chamber of horrors: forgetting it”. Cilly’s story is a small one from the war and its aftermath; nothing more and nothing less. What is important for me is that in a time when simplistic political statements and loud lies are becoming increasingly fashionable again, I want to tell the story of my grandmother, the reasons for her taking, her horrible experiences with as much detail as possible. This is not a case of showing that “Germans suffered too”, but to show that beyond loud lies and false quotes shared on social media there’s the need to engage with the often harrowing facts of the war to avoid any chance of the repetition of war. Especially for us, today, as the last witnesses are slipping away.

Cilly’s refusal to become dominated by her traumatic experiences also had a profound effect on me. I aim to keep a positive outlook on life (as difficult as that is these days), and enjoy every day as much as possible. I would have not come to Ireland if she had instilled a fear of the unknown in me, a fear of strangers. Instead, she always told me to go out there and see the world, and that there is one thing that the fate of her and her female comrades in the camps showed her: that unity and solidarity always beat fear and fragmentation.

Marcel Krueger is a German writer and translator living in Ireland, who mainly writes nonfiction about places, their history and the journeys in between. He also works as the book editor of the Elsewhere Journal, and his articles and essays have been published in the Guardian, Slow Travel Berlin, Catapult and CNN Travel among others. He has translated Wolfgang Borchert and Jörg Fauser into English. His latest book Babushka’s Journey: The Dark Road to Stalin’s Wartime Camps was published by IB Tauris last November.