In praise of older books: Thunderhead by Mary O’Hara (1943)

Julie Parsons picks the American author’s book, which she read as a horse-mad 10-year-old 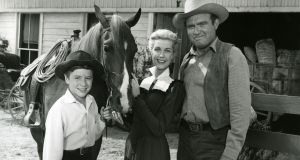 The American writer Mary O’Hara is best known for her trilogy set in Wyoming. My Friend Flicka, Thunderhead and Green Grass of Wyoming would now be classified as young adult fiction.

When I read them as a horse-mad 10-year-old, I didn’t know or care what kind of books they were. They grabbed me by the scruff of my neck and dragged me into a world of mountains, blizzards, wild horses and wildcats, where love of animals and America’s wilderness was paramount.

Twelve-year-old Ken McLaughlin has lived his whole life on his father’s horse farm high up in the Rocky Mountains. His beloved chestnut mare, Flicka, is his best friend. But when she gives birth to the white stallion Thunderhead, Ken is faced with a dilemma. Thunderhead is strong and fast but wild. He has the ability to become the best racehorse in the west, and to save the McLaughlins’ farm from bankruptcy. But can Ken control the stallion? Can he transform him from a creature of the mountains, tough and strong, whose only interest is his band of mares, into a winner, subject to rein and whip, obedient to his rider’s every command?

Even today, when I read the book’s opening sentence, “Within the firm walls of flesh that held him prisoner the foal kicked out angrily”, I’m hard-pressed to put it down until I’ve reached its final full stop.

O’Hara has a keen eye, not just for the external world, but also for the interior lives of her characters. Ken’s parents – Nell, his sensitive, loving mother, and Rob, his father, a graduate of West Point, America’s equivalent of Sandhurst, whose arrogance and suppressed rage often threaten their marriage – are described as vividly as the wild landscape where they live.

The books are suffused with emotional, intelligent, beautiful writing for readers of every age.