Bloodbath to whitewash: the Civil War crimes of Paddy O’Daly 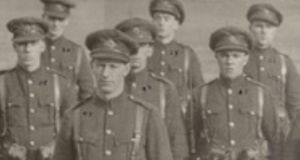 As we enter a new phase of centenary commemorations a glimpse into the more horrific aspects of our wars of Independence and the Civil War would not be out of place. In this context the story of one of the combatants, Paddy O’Daly will be of interest to many people.

The introduction of the Emergency Powers Act in October 1922 had given the National Army the power to execute members of the IRA captured in possession of weapons. By the end of December 1922, 21 IRA prisoners had been formally executed. Major-General Paddy O’Daly was then then promoted to General Officer Commanding of Kerry Command. By 1922, O’Daly had seen a great deal of action. He was a veteran of 1916 and had served a number of prison terms. Released from prison in August 1920, O’Daly was invited by Michael Collins to command a group of assassins known as the Squad. During the War of Independence, the Squad, acting expressly on Michael Collins’ orders, carried out many killings of RIC detectives and British intelligence agents. The appointment of O’Daly and the direction the National Army took under his command would define the Irish Civil War as a murderous and brutal conflict.

Major-General O’Daly’s HQ was in Tralee and he lost no time in demonstrating to the men in his command what treatment the IRA could expect. On January 20th four republican prisoners, captured in possession of arms, were executed at Ballymullen Barracks. The formal executions, 77 in total, were a very distressing part of the Civil War. But it was the torture, extra-judicial killings and atrocities carried out by National Army officers in O’Daly’s command which shattered the very standing of the Irish Free State both in Kerry and throughout the country. On January 23rd, republican sympathiser Daniel Daly was shot dead in a classic Squad-like assassination in Tralee. Two days later, Paddy O’Daly made an unexpected appearance at the inquest into Daniel Daly’s death, claiming the railway worker was planning to sabotage steam engines. No apology was made for the murder of Daly and more extra-judicial killings followed.

Over a period of six days, a group of officers belonging to O’Daly’s inner circle carried out three separate massacres of IRA prisoners

The IRA were not innocent of extra-judicial killings either. Two National Army officers, Tom and John O’Connor-Scarteen, were murdered after capture in Kenmare in September 1922. IRA intimidation and harassment of Free State supporting families was also commonplace. However, the atrocities carried out by O’Daly’s Kerry Command in the name of the Free State far surpassed anything carried out by either side during the Civil War. The worst of the atrocities in Kerry were in reaction to an IRA trap mine set to kill Paddy “Pats” O’Connor. On March 6th, 1923, O’Connor led a detachment of Dublin Guards to an IRA dugout at Knocknagoshel. As the men opened the entrance to the dugout, the trap mine exploded blowing them to pieces. Five men were killed and one terribly injured.

Over a period of six days, a group of officers belonging to O’Daly’s inner circle carried out three separate massacres of IRA prisoners. On March 7th, nine IRA prisoners were tied to a mined barricade at Ballyseedy and blown up. The survivors were killed with machine gun fire and grenades. One man, Lieut Stephen Fuller, survived the massacre as he was blown clear by the blast. When O’Daly learned Fuller had survived, he declared the IRA man to be insane. On the same night as the Ballyseedy murders, a National Army unit from Killarney murdered another four IRA prisoners by mine explosion at Countess Bridge. In this case IRA Volunteer Tadhg Coffey survived the blast and the subsequent machine gun fire and managed to escape. On the night of March 7th , 1923, a third cohort of IRA prisoners were murdered by mine explosion at Bahaghs near Cahersiveen. This time there would be no escape as the prisoners were shot in the legs prior to the mine being detonated.

As distressing stories of the fate of IRA prisoners in Kerry began to circulate, a court of inquiry was held to investigate events at Ballyseedy. The court President was none other than Paddy O’Daly himself aided by GHQ senior officer General Eamon Price and Colonel McGuinness of the National Army Kerry Command staff. The result was a whitewash which claimed the IRA themselves had planted the trap mine at Ballyseedy. Compensation to the families of the atrocities was denied by President WT Cosgrave who argued that, as the dead men had taken up arms against the State, the families were not entitled to recompense. Major-General Paddy O’Daly carried out another batch of formal executions on April 23rd, 1923 as three IRA Volunteers were shot at dawn.

O’Daly and two junior officers carried out a violent assault on two sisters in Kenmare. The women were badly beaten, whipped with Sam Browne belts and had their hair covered in axle grease

Chief of Staff of the IRA, Frank Aiken, issued a stand-down order for all IRA units on April 27th, 1923. The Civil War was over. This did not end O’Daly’s penchant for violence. On the night of June 2nd, 1923 O’Daly and two junior officers carried out a violent assault on two sisters in Kenmare. The women were badly beaten, whipped with Sam Browne belts and had their hair covered in axle grease. This attack caused shock waves in the Irish Free State and Cahir Davitt, a senior legal officer of the National Army, recommended that Major-General O’Daly be court martialled. General Richard Mulcahy could not stand for such action against a senior National Army commander with an accomplished record. The attorney general of the Free State, Hugh Kennedy, responded to a request for his legal opinion by the Free State cabinet with an undermining of the credibility of the victims in the case. A National Army court of inquiry recognised O’Daly’s guilt and involvement but stated the main perpetrator was one of the junior officers involved in the attack. O’Daly remained in charge of Kerry Command until he was dismissed along with many veterans of the War of Independence and Civil War.

In approaching the centenary of the War of Independence and the Civil War, perhaps foremost in our thoughts should be Stephen Fuller, the sole survivor of Ballyseedy. He bore his experience with great dignity and without bitterness. One hundred years on it is for us to remember the dead. They have lived their lives and some of them have made terrible errors. Hopefully in commemorating the past with dignity we can learn from their mistakes and build a stronger and more peaceful society.
Dominic Price is author of We Bled Together; Michael Collins and the Dublin Brigade (Collins Press)