The Future is History review: A bleak portrait of Russia under Putin 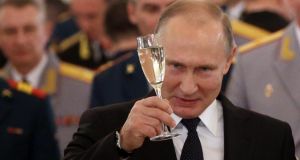 Vladimir Putin: Nostalgia for the stability and predictability of the Soviet past may account for much of his appeal

Book Title:
The Future is History: How Totalitarianism Reclaimed Russia

Masha Gessen is a distinguished and prolific writer, journalist and activist. She is a sharp critic of President Vladimir Putin and her latest book tries to explain how Russia, which attempted to cast off its authoritarian Soviet heritage in the late 1980s and early 1990s, has ended up under a regime which she characterises as totalitarian.

Two features distinguish this work which covers developments from Gorbachev to Putin: first, its personalised vantage point; and second, its attempt to establish a conclusive definition of the regime and the forces that formed it.

The work’s originality derives in part from the attempt to articulate this story around the experience of four representatives of the generation born in the early to mid-1980s – those whose lives were shaped by this grand political experiment. Inevitably this cohort contributes little to the survey until roughly the turn of the millennium (ie about the first 200 pages), when they came of age. Before that, the individuals who afford an insight into the processes at work include a psychoanalyst, Gorbachev’s liberal adviser Alexander Yakovlev; Boris Nemtsov, the political luminary of the chaotic 1990s, who was murdered in central Moscow in 2015; and the now influential, crazy, political philosopher, Alexander Dugin.

This strategy ensures that the narrative is neither a simple rehearsal of familiar events nor an exercise in academic abstractions. However, it should be said that Gessen’s young protagonists are hardly representative, as she asserts, of the experience of “millions of others”. Two hail from the top political elite: one is Yakovlev’s grandson, another Nemstov’s daughter, and a background in the intelligentsia accounts for the others. Almost all are also privileged to live in Moscow. (There are no workers, villagers, etc.)

What this cast of characters does provide, however, is a stimulating, sometimes idiosyncratic perspective. We learn what it was like to be a psychologist whose interest in Freud was frustrated by the Soviet regime and who had to struggle to master psychoanalysis in the 1990s. Similarly, we discover that sociology developed late in the Soviet period (only from the end of 1960s), that most modern western political sociology was banned until the late 1980s, and that both as a practical tool for guiding policy and as an academic discipline, it has continued to struggle. (Readers will be bemused by the account of the travails in the last decade of the sociology department in Moscow State University, where Dugin has been installed as director of an academic centre for the study of conservatism.)

One of Gessen’s main points – and one worth remembering – is that the Soviet regime, by undermining disciplines such as history and sociology, deprived of the Soviet citizens of the ability to understand their society and to make sense of their lives which, Gessen observes, “is a function of freedom”. She suggests the Soviet regime “robbed people not only of their ability to live freely but also of the ability to understand fully what had been taken from them, and how”. It was this that enabled the regime to endure, as people came to accept the rules of the political game. Soviet citizens became accustomed to “doublethink”, not, Gessen suggests, in the Orwellian sense of saying one thing and believing another, but in that of “habitual fragmentation”, of holding contradictory views in different situations. Ideology – as a set of consistent beliefs – was really not so important to the Soviet regime, she believes. It provided a shared language, enabling people to belong to general social life, rather than being a shared faith and commitment.

Gessen reflects on the consequences of the failure to come to terms with the Soviet past and to address its traumas. This is because she believes that the old regime has cast a long shadow over contemporary Russia. Nostalgia for the stability and predictability of the Soviet past accounts for much of Putin’s appeal, she suggests plausibly. Homo sovieticus, who adapted to and survived Soviet totalitarianism, rather than disappearing after 1991, has endured and this has enabled the “old system” to be “reconstituted in new guise”. Citing Fromm, she argues that Soviet totalitarianism conditioned Russians to suffer a paralysing fear of freedom (although one might more prosaically suggest that the 1990s provided enough trauma and suffering to make people conservative forever).

Gessen reflects at length on the nature of totalitarianism, citing much of the classic literature on the subject, and argues that Putin’s regime, which has become increasingly authoritarian and repressive, is essentially totalitarian. Totalitarianism is a term that obscures as much as it reveals and one might observe that the late Soviet order (which is her implicit point of reference) differed considerably from that which prevailed during Stalin’s rule. To speak of “terror” apropos of Putin’s Russia overlooks the fact that citizens are generally able to conduct their lives as they wish, so long as they keep out of politics and the affairs of the great and powerful.

However, one of the main themes of Gessen’s book is homosexuality and its criminalisation in contemporary Russian. One of the main arguments she makes in support of her thesis in relation to totalitarianism is that the private sphere, as illustrated by the experience of one of her protagonists who is gay, has been increasingly invaded by the state. Whether or not one agrees with her general definition of Putin’s Russia, she offers a damning portrait of endemic bureaucratic corruption, the repression and intimidation of civil society and the targeting of perceived enemies of the social and political order.

As Gessen demonstrates incontrovertibly, the public – and especially the political – sphere is tightly controlled by the state, with elections essentially a simulacrum, political pluralism nonexistent, freedom of assembly and of speech for the mass media restricted or virtually absent. The authoritarian nature of the state is amply shown by the repression of the protest movement of 2011-2012 which Gessen documents in detail. The willing acquiescence of most citizens in this is illustrated by the widespread support for the takeover of Crimea and the rise of a new Russian nationalism, both among the public and an official rhetoric.

Overall Gessen provides a highly readable, engaging (if ultimately depressing) account of recent Russian history. Although some important episodes are not covered and readers may disagree with her general characterisation of the regime, there is much to be learned and to reflect on here. Her epilogue – which outlines the fate of her protagonists (for several, death, exile or silence) – is a telling epitaph to the hopes of a generation.

Judith Devlin is a professor of history at UCD and author of Slavophiles and Commissars: Enemies of Democracy in Modern Russia and The Rise of the Russian Democrats: Causes and Consequences of the Elite Revolution