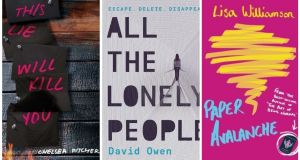 In the 1980s and 1990s a mastermind by the name of Christopher Pike (a penname whose origin is more notable now than then with the rise of the Star Trek reboot) enthralled teens throughout the English-speaking world with his tales of terror. He specialised in a combination of utterly creepy set-ups with all-too-real teenagers, complete with traumatic backstories, if necessary.

Chelsea Pitcher’s This Lie Will Kill You (Simon & Schuster, £7.99) follows in his path with a wonderfully spooky yet generic set-up – a group of teenagers in an abandoned house – that first utilises and then transcends the expected tropes. In a world where “people appeared out of nowhere, and disappeared just as quickly. Pretty girls fell head over heel for monsters. Boys were transformed into fire, into pure glittering light”, the party of five who gather one ominous night cannot expect to escape unscathed.
Like Pike, though, Pitcher flings her characters into the scene so dizzily that the reader is left frantically turning the pages, desperate to find out what happens next. It would be curmudgeonly to critique the world established while in it, because “in it” one certainly is. Despite frequent formulaic elements, this is a delight of a novel under no illusions that one must reach adulthood before becoming a psychopathic killer.

Karen M McManus similarly draws on familiar horror tropes in her second thriller, Two Can Keep A Secret (Penguin, £7.99). In picturesque, wealthy Echo Ridge, one character observes how it “sucks that people in this town keep getting away with murder, doesn’t it?” When Ellery and her brother move in with their grandmother, to the town their mother fled from and never speaks about, bad things start happening immediately. First a hit-and-run that leaves a popular teacher dead and then a series of threats towards the three prospective homecoming queens (to be “teen royalty” is asking for trouble in this genre) that recall two murders of the past, culminating in yet another missing girl.

Ellery sets out to investigate, prompted by a true-crime obsession that may feel a little too convenient but proves to have its origin in her family history and complicated by her growing attraction to Malcom, the younger brother of a former suspect (over whom a shadow still hangs). The dual narrative structure ensures that we know both protagonists can be trusted, but remain satisfyingly uncertain about the many other characters in this world, including a seemingly-hapless young police officer who may or may not have been in love with one of the dead girls.

At times the large cast of characters and their connections to one another gets confusing, particularly given the number of siblings and parents of the present-day teenagers linked to the events of the past, as well as a surprising volume of secret relationships and jilted lovers. Nevertheless, we are in good hands here and although occasional plot points veer towards the predictable, there’s enough meat here to keep us guessing until the very end.

Moving away from overt horror and into the more mundane ugliness of life, we have British author David Owen’s third novel, All The Lonely People (Atom, £7.99), which tackles loneliness and that great contemporary topic - the internet. Kat is harassed away from her online persona by a group of fairly pathetic young men, all inspired by the ‘men’s rights’ movement. She vanishes online - and then in real life. The only one who’s noticed is a child involved in her initial disappearance, Wesley, who has troubles of his own.
The litmus test for novels about online harassment is, or should be, how difficult it is to read them, how true-to-life they are. All The Lonely People is an unsettling, uncomfortable read, initially seeming like it may be a grim, journalistic account but then is quickly elevated to something more artistic, literary and indeed interesting by its magical realist bent. Both Kat and Wesley fight for the reader’s heart in a narrative that demands empathy, but not forgiveness, for bullies and their victims.

Lisa Williamson’s Paper Avalanche (David Fickling Books, £12.99) delves into “real world” loneliness in her account of 14-year-old Ro Snow, isolated from her peers due to her mother’s hoarding tendencies. When a popular boy speaks to her, she is immediately convinced “This must be a dare”; when a girl back in school after serious illness tries to befriend her, she is convinced there’s something weird going on. But as she slowly opens herself up to others, terrifying as it is - and she is always haunted by the idea of “a well-meaning adult making a call to Social Services” and separating her from her mum - she discovers a stronger sense of herself and a talent she never knew she had.
Although at times it does seem to tick all the boxes for a “problem novel” there’s enough complexity within the story to keep things interesting and its appreciation of how there’s more to teenage life than romance (Ro’s new friendship is particularly well executed) is very welcome.

Finally, Natasha Ngan’s Girls of Paper and Fire (Hodder & Stoughton, £14.99) is an Asian-inspired fantasy novel from the perspective of a girl plucked from obscurity and chosen as one of the king’s concubines. At court, she finds love in the last place one might expect, a fellow ‘paper girl’ who turns out to be a secret assassin. The romance element is by far the most appealing aspect of this book; there is something a tad disheartening about how even worlds with magic and demons seem to replicate the patriarchal abuse of women in our world so precisely. Full of promise but not quite hitting the mark.