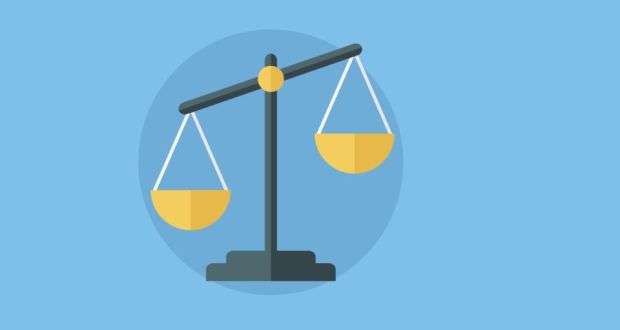 Counterparts is a hotchpotch of short stories, poems and essays written by lawyers, in aid of the Peter McVerry Trust.

There is nothing more majestic and brutal than the moment a jury convicts a fellow citizen of a crime. It is as if the air is sucked out of the room. The void then instantaneously fills with raw emotion. An acquittal brings consummate relief to an accused. The egalitarianism and omnipotence of the law is captured in the reading aloud of the verdict.

Counterparts is Danielle McLaughlin’s brainchild. It’s a hotchpotch of short stories and some poetry with a couple of essays thrown in, more than 20 contributions all written by lawyers. Their brief: to take a judgment and use it as a matrix for a story. Mc Laughlin herself worked as a solicitor for many years until a sudden illness meant she had to cease practice. Her debut short story collection, Dinosaurs on Other Planets (2015), was published to critical acclaim.

McLaughlin believes that writers and lawyers share a love of language, and both chisel out words to create a compelling narrative. Lawyers do like order. The late Nuala O’Faolain attributed Peter Sutherland’s success at the bar to his “ability to make provisional order out of chunks of chaos”. But it is the clients that provide the raw material. Interpreting this is a creative process, but you must not stray. Imagination is forbidden, and so much of lawyer-speak is more likely to be journalism than literary fiction.

Murder, infanticide and rape are prominent in this anthology. But vagrancy, discrimination at the local golf club, and the increasing encroachment by the State in the way we live out our lives also feature. The cases mostly point up the sharp end of the law. It’s not always coercive.

In There, a prisoner is confined to a cell in which all interaction between him and his captors is automated. Each day a work trolley “with grey casters that squeak beautifully like mice in a children’s story” is delivered. There are three piles of paper in different colours, white, lime-green and a pale pink. He carefully inks each page with an embossed stamp. He used to despise the work in the early years but has now come to love it. One day he finds a hair “long and golden on the page, gently curled at one end like a smithed piece of jewellery”. He thinks of it as presumptively female, and his ecstatic disbelief is quickly replaced by fear and excitement that the placing of the hair was a subversive act. Later that night he is awoken by the sound of an inspection alarm, and he hurriedly straps himself on to his bed, dons his mask, goggles and earmuffs, and waits.

The story has echoes of the case taken by the Government against the UK before the European Court of Human Rights in Strasbourg. In the initial phase of internment, IRA suspects were made stand for hours, deprived of food and sleep, subjected to continuous loud noise and hooded except when being interrogated. The court found that the prisoners had been subject to inhuman and degrading treatment but stopped short of classifying the activities as torture. Some countries have since adopted the finding, as a template of behaviour that while not exactly acceptable is not torture either.

In the case of R v Dudley and Stephens, two survivors of a shipwreck cast adrift in a boat had to decide whether or not they are going to kill the cabin boy Richard Parker for food. The likelihood was that Parker, who was unwell, was going to die anyway.

The killing of a turtle by slitting its throat while it nips aggressively at its captors provides an evocative precursor of what lies ahead. They drink the blood, which tastes “sour and resinous” and slice the meat into strips, which are hung out to dry. They never even caught a fish after that even though shoals swam tantalisingly close.

The deed had been done by the time they were rescued. They were tried and convicted of murder on their return home. The court rejected a defence of necessity observing that “to preserve one’s life is generally speaking a duty, but it may be the plainest and the highest duty to sacrifice it”.

A different perspective emerges in Dignity. Siofra Golden, who has suffered from multiple sclerosis for 13 years and is in excruciating pain, has decided to die by euthanasia. Her sister Ellie is organising travel to Geneva. The plan has to be shelved after a visit by members of An Garda Síochána who warn her that her sister may be prosecuted for committing the offence of assisted suicide. Undeterred, Siofra has to resort to a more blunt methodology.

In Fall Risk, a repeat student working as a domestic in a nursing home befriends Patrick who is recuperating after a fall. He is suffering mini-strokes and is forced into making a choice between home and residential care. Patrick is staunchly independent. The story revolves around how each of them slowly comes around to accept the inevitable.

The moving statue phenomenon in the summer of 1985 provides the backdrop to Nine-Day Wonder. Crowds thronged to dozens of sites where movement was allegedly observed. For Robert Draper it was too much. He damaged statues at Ballinspittle, Quarryvale and Ballyfermot, remarking wryly that, “the statue at Ballinspittle only moved once – when I hit it”. A defence that he had been sent by God to destroy false idols was rejected.

Nine-Day Wonder is set in Templeryan, Co Tipperary, during the War of Independence. The protagonist, an Irishman, who had fought in the Great War, fills the hollow of a statue of the Virgin Mary with alcohol and pig’s blood, and inserts into it a mechanism that intermittently secretes the red mixture through the eyes. Crowds soon flock. His motivation is not spelled out. A local woman who takes it upon herself to forensically examine the entrails of the statue uncovers the fraud. She dumps it in the town square to allow people make up their own mind. The occupying forces get the blame.

The contributions in this collection are all conspicuously well-written. It is probably noteworthy that many contributors are writers with a legal background rather than the other way around, while others are in the early stages of their career and may yet have a foot in both camps. The pedigree of the editor and publisher also, no doubt, plays a part. The stories are disturbing and insightful and are vivid portrayals of the human condition in turmoil.