War with Russia? by Stephen Cohen review: A stern warning 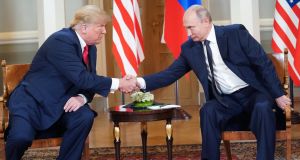 Book Title:
War with Russia? From Putin & Ukraine to Trump and Russiagate

According to his critics, Prof Stephen Cohen is “Putin’s No 1 American apologist”, a fellow traveller of an authoritarian rogue state and an implacable opponent of western efforts to contain Russian aggression and expansionism. Adding to their outrage is Cohen’s endorsement of US president Donald Trump’s pro-Putin sentiments, even though he is a life-long Democrat.

By his own lights, Cohen is a “patriot of American national security”. He rejects the Russiagate narrative that Putin’s meddling in American politics led to Trump’s election as not just false but dangerous and damaging to American interests. Far from being a subversive threat to the United States, Putin is a potential partner in a revived Russo-American détente. The greatest threat to American security, argues Cohen, is not Putin’s foreign policy but international terrorism, nuclear proliferation and instability in the Middle East.

Cohen was not always so notorious. A highly respected historian of Soviet Russia, he made his name with a masterly biography of Nikolai Bukharin, a moderate Bolshevik leader executed by Stalin in 1938. In the 1970s and 1980s, Cohen was deeply involved with dissident circles in the Soviet Union, doing much to propagate their views to the wider world. He was also an ardent supporter of Mikhail Gorbachev’s efforts to democratise Soviet socialism.

But after the collapse of the communist system in 1991, Cohen became a dissident of a new type – a severe critic of the US’s crusade to reinvent Russia as a liberal, free-market democracy. Russia’s traumas in the 1990s were mostly home-grown, but Cohen felt the US shared responsibility for the so-called economic shock therapy that impoverished the Russian people, created an elite of super-rich oligarchs and corrupted the country’s politics.

As Cohen never tires of reminding us, you can’t understand Putin and contemporary Russia without reference to the country’s historical memory of the 1990s. Central to that memory is the disdain with which a triumphalist West treated post-Soviet Russia, deemed to be a weak power whose interests and sensibilities could be trampled on with impunity. It was not Putin who caused what Cohen calls the new cold war, but Nato’s expansion to Russia’s borders; US and EU meddling in Ukraine; and western regime-change wars in Afghanistan, Iraq, Libya and Syria.

This book is based on a series of weekly radio broadcasts made by Cohen under the rubric The New US-Russian Cold War. The broadcasts began in 2014 but Cohen had long argued that a new cold war was unfolding in American-Russian relations.

There is an urgency and anxiety running through Cohen’s commentaries because he sees the new cold war as much more dangerous than its predecessor. Russiagate has been accompanied by a pernicious Russophobia that demonises not just Putin but the Russian people. The resultant hysteria has been ramped up by US media, by grandstanding politicians, and by blatantly self-serving military and industrial interests. American elites seem to have lost their fear of atomic warfare, while there is little or no mainstream political opposition to current hawkish policies aimed at Russia. As Cohen points out, even at the height of the Soviet-American cold war – an existential struggle between capitalism and communism – there were many mainstream advocates of détente with the USSR. During the old cold war the communist bloc acted as a buffer between the two sides. The new cold war is being fought directly along Russia’s borders, most dangerously in a proxy civil war being battled out in Ukraine.

Among Cohen’s many controversial claims is that the greatest scandal in American politics is not Russiagate but Intelgate – the myth propagated by elements of the US intelligence community that Putin is attempting to subvert American democracy. The reverence with which some liberals greet pronouncements made by today’s intelligence chiefs is in sharp contrast to their past critiques of the malevolence and misinformation spread by the CIA, the FBI and other agencies.

Another Cohen target is the hallowed institutions of the American media, especially the New York Times and the Washington Post, whose reporting on Russia he sees as not merely tendentious but actively mendacious. The narrative of the new cold war is driven by stories published by these newspapers that are based on unverified, anonymous intelligence. According to Cohen, the Times credo of “All the News That’s Fit to Print seems to have become All the News That Fits”.

Although the book focuses on current affairs, Cohen brings to bear a much-needed historical perspective. The first post-Soviet Russian-Western clash occurred in 1998-1999 when Nato sponsored the secession of Kosovo and bombed Russia’s ally, Serbia – an intervention that Moscow later used to justify its takeover of Crimea. If the past is any guide, western sanctions against Russia will achieve nothing, except to bolster support for Putin at home. Notwithstanding the accusations of treason that greeted Trump’s summit with Putin in Helsinki, he is not the first US President to favour détente with Russia. That was the policy of Dwight Eisenhower, Richard Nixon and Ronald Reagan too.

Cohen is by no means an uncritical supporter of the Putin regime. While he sympathises with Moscow’s foreign policy he characterises its domestic polity as a “soft authoritarianism” and sees Russia as a society in transition to a better democracy. What he fears is that western isolation of Russia will blow the country off the democratic path. Waiting in the wings to replace Putin are not pro-western liberal democrats – who have little support in Russia – but truly authoritarian ultra-nationalists. Hillary Clinton may have compared Putin to Hitler but the Russian president is actually a moderate.

Cohen gives the impression that he is a lone voice opposing the spurious narratives created by the new cold war warriors. He is disappointed by what he calls the “silence of the doves”. In fact, the new cold war has many critics, not least among Russia experts. In Europe, if not in the United States, there is a strong undercurrent of what the Germans call Putinverstehers – those who urge understanding of the Russian point of view. Liberal elites may wax hysterical about the Russian threat, but common sense about Putin prevails among the general public.

The title of Cohen’s book is intended not as a prophecy but a warning. In the overexcited debate about Putin and Trump, Cohen chooses to eschew moderation because he believes that in practice that results in conformity with an anti-Russia narrative that is not only wrong but dangerous. This book will delight his supporters and enrage his opponents, while readers of a moderate persuasion will be able to admire the passion and tenacity of his resistance to the trend towards provoking war with Russia.