When Peig came to Dublin, where everybody was ‘posh’ 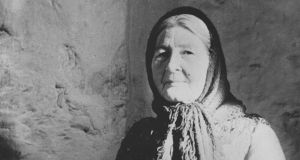 If you’re familiar with the name Peig Sayers the first thing that probably pops into your head is an image of a woman in a shawl, followed by one of the Great Blasket island, in Co Kerry.

Famously, or infamously, it was Peig who wrote a mournful memoir that a generation of Irish people (including me) were required to study in Irish class. Peig is so synonymous with Kerry that it comes as a surprise to discover that she received visitors in Dublin on this day 66 years ago, aged 81.

On Wednesday, January 9th, 1952, The Irish Times carried a story about Peig’s first visit to Dublin. She had come to the city the day before by ambulance from Tralee. At that point she had been off the Great Blasket for 10 years, living in Dún Chaoin with her son, Mícheál Ó Gaoithín. She was brought to St Anne’s, on Northbrook Road in Ranelagh, a hospital for “diseases of the skin and cancer”.

The report is a fascinating if uncomfortable read. Today we would consider it a gross invasion of privacy to have what seemed like a free-for-all press conference and photocall at the hospital bedside of someone both seriously ill and blind. The hospital clearly had no problem opening its doors for the “reporters and photographers” who crowded around her bed as if she were a curiosity.

Peig’s memoir had been published in 1936, and she was described as “one of the best-known of Ireland’s story-tellers”.

Whoever wrote the article – it doesn’t have a byline, as was common at the time – managed to get the boot into Peig’s son. It was Mícheál, called a “scrivener”, who had written down the words Peig had dictated to him. He, the report gleefully implied, had misplaced literary notions of his own. “He too has written a book, which was accepted 11 years ago by the publishing firm An Gum, which has not published the book.”

Peig received the press in bed, wrapped in a shawl and drinking a glass of whiskey. She was attended by an Irish-speaking nurse, Áine O Friel. “Dublin was the big city, [Peig] said, where all the people were ‘posh’ (it sounded better in the Irish term, ‘galánta’).”

The whiskey had been given to her by one of her Dublin friends, who is unnamed.

“Peig speaks English, unwillingly and falteringly, but there is nothing faltering about her Irish.”

People in general, today, she thought, were not as friendly as they used to be when she was a young woman. Manner and customs had changed – and not for the better

She still had strong opinions. “People in general, today, she thought, were not as friendly as they used to be when she was a young woman. Manner and customs had changed – and not for the better.”

Whatever treatment Peig received in Dublin in 1952, it helped prolong her life. She lived for a further six years.

The hospital where Peig was a patient closed in 1997. Its period buildings were later converted into luxury accommodation. Whoever now occupies the room where Peig was once a patient very likely has no idea that one of Ireland’s most famous storytellers once received the Irish press at her bedside there.