How some Irish people escaped the death penalty

Justice, Mercy and Caprice review: An engaging look at Ireland’s journey towards the abolition of death penalty 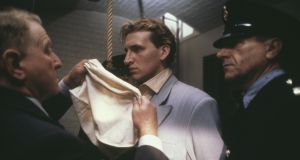 Executioner Albert Pierrepoint (Clive Revill) puts a bag over the head of Derek Bentley (Christopher Eccleston), in a scene from ‘Let Him Have It’, based on the real life case of Bentley, who was controversially hanged for murder in 1953. Photograph: Richard Blanshard/Getty Images

Book Title:
Justice, Mercy and Caprice: Clemency and the Death Penalty in Ireland

To many, the death penalty may seem like an anachronistic punishment, a relic of a past age that in the process of civilisation has been confined to the history books. Some may therefore be surprised to learn that Ireland’s last link with the death penalty was only severed in 2015, when the last two people to be sentenced to capital punishment for the murder of a member of An Garda Síochána, were released from prison, having served 30 years following the commutation of their death sentences.

Up until the early 1960s the death penalty was a mandatory sentence for murder, and until 1990 it remained as the ultimate penalty for so-called “capital offences”, which included the murder of on-duty members of the Garda or the Prison Service, or the politically motivated murder of foreign dignitaries on Irish soil.

However, the practice of the State enacting death as a means of punishment effectively ceased after 1954 when Michael Manning, the last person to be executed, was hanged in the yard of Mountjoy prison. In 2001, the public voted in a referendum to remove all references to the death penalty from the Constitution. It did so by a majority of 62 per cent, although if the turnout was a reflection (35 per cent), it was not an issue on which the public was particularly exercised.

In this book, Ian O’Donnell charts Ireland’s journey towards the gradual abolition of the death penalty. The central focus is on the practice of clemency, that is, where a court imposed a death penalty but the State intervened to prevent its enactment. From 1923 to 1990, in the period following the end of the Civil War to the removal of the death penalty from the statute books, 98 men and women were sentenced to death, whose convictions were upheld on appeal, but in only 35 of these cases the ultimate penalty was enacted. In other words, almost two-thirds of those whom the courts had sentenced to death had their sentence commuted. Why was this the case, and what does it reveal about attitudes to crime and justice, and society and culture?

O’Donnell notes that his interest was piqued on this topic, when he came across a letter in the National Archives from the executioner, Thomas Pierrepoint, complaining about delays in the reimbursement of his expenses, following a futile journey to Dublin from Yorkshire. Pierrepoint, or his nephew Albert, travelled from England throughout the first half of the 20th century to provide their grim service, as it proved impossible to recruit someone locally to the task. Patrick Aylward, the person who Pierrepoint was due to hang in 1923, had had his sentence commuted by the government at the last minute. Aylward had committed a particularly horrific murder – “roasting an infant on a fire”, but had his sentence commuted to penal servitude to life, following representation to the government from the coadjutor Bishop of Ossory. In another quirk of religious intervention, Aylward was subsequently released from prison along with several other convicted murderers, to mark the Eucharistic Congress held in Dublin in 1932.

In extensive archival research, including analysis of records held in the National Archives, the Central Criminal Courts and closed prisoner files, O’Donnell traces the rationales behind the clemency decision-making process in the cases of those sentenced to death, whose sentences were commuted. The decision to grant clemency involves the intersection of politics in matters of law, and as such provides a unique vantage point from which to explore the functioning of the State and prevailing attitudes towards crime, punishment and morality.

Once a court passed its sentence and any appeals had been heard, it was within the Office of the Governor General (up until 1936) and subsequently the President’s powers to commute the death penalty, but they would only exercise this power on the recommendation of the government of the day. What motivated the decision to recommend clemency in some cases, but not in others?

O’Donnell’s careful analysis of these cases suggests that the exercise of clemency was motivated by one of three factors – justice, mercy or caprice. When justice was a motivating factor, there was an attempt to tailor the punishment to the individual circumstances. This included cases where the law meant that the court’s hands were tied in regard to the penalty it could impose, for instance where the death penalty was mandatory, as was the case for crimes of infanticide prior to the introduction of reforming legislation in the late 1940s.

The exercise of mercy was when the deserved punishment was softened out of compassion for an individual’s plight. Capricious clemency was exercised when an unexpected turn of events led to a change in direction, such as in the case of Patrick Heffernan, who having been convicted of the murder of a young woman in 1950, was spared the death penalty following a reversal of the government’s decision that the law should be allowed to take its course.

The majority of clemency cases were motivated by justice, in other words, through the government providing its own corrective to legislative strictures. However, given that the government was ultimately responsible for laws and their reform, this was a curious form of achieving what was just.

Gender is a significant thread throughout this book. The last woman to be executed by the State was Annie Walsh in 1925, who was convicted of murdering her husband with a hatchet. Thereafter any woman sentenced to death had their sentence commuted. For many, this was because their crime involved killing an unwanted child, an action that often reflected the moral strictures of the time.

However, the decision to grant clemency was sometimes double edged. Having been spared the hangman’s noose, some were subsequently coercively confined for years, in an institution such as a Magdalene laundry. In analysing the factors that led to the exercise of clemency and its aftermath, O’Donnell’s extensive research sheds light on the exercise of State power in Ireland and the potent mix of politics, chivalry, morality and deference over time.

Nicola Carr is associate professor in criminology at University of Nottingham