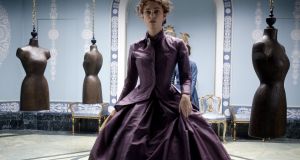 “Russian literature deserves more love letters written by total idiots,” says stand-up comedian and journalist Viv Groskop near the beginning of her new book, which is part literary primer, part memoir, part self-help manual. “For too long it has belonged to very clever people who want to keep it to themselves.”

Groskop, no idiot but someone who has lived in Russia, studied and loved Russian literature, believes that enjoying these classics shouldn’t require an immersion in the historical context or knowledge of the “best” translation. From specific works by Tolstoy, Turgenev, Dostoevsky et al she has filleted “clues left in these great classics” to living a good life, and matched incident to her own personal experience.

Leo Tolstoy in particular has a history of being filleted for wisdom. Since people first found War and Peace too cumbersome (ie immediately) there have been elegant pocket books which sought to cull the “wisdom” from it – assuming that a book is a divisible unit, and that its wisdom can flourish outside its intended medium.

But the wisest and most engaging parts of The Anna Karenina Fix are culled from the author’s own life in relation to the texts. How, growing up, she found kinship with Russian characters because their names were difficult to say, as she believed hers to be. (This led to the romantic assumption that her own name was Russian). How as a teenager she tried to emulate the long lashes of Tolstoy’s Anna with an ill-deployed eyelash curler. Her experience of Russian funerals and unsuitable Russian men.

She’s also good at fitting writers’ autobiographies into a wider context of how life reflects art. In a chapter on Pushkin she likens the spat between Vladimir Nabokov and Edmund Wilson over the former’s translation of Eugene Onegin – which terminated a 20-year friendship – to the needless, wasteful duel between that book’s hero and his best friend.

There is a lot of knowledge, worn with suitable lightness, in this fun book. But there’s also a forced comic lightness at times that, even in a self-help book by a comedian, simply doesn’t belong. “We are not talking Doris Day here,” she says at one point of an Anna Akhmatova poem about the gulags. (You’d hardly say the same if the poet was talking about a different European camp of roughly the same historical period: Belsen, say?) And then there’s the striving for relevance: comparisons bristling with modern pop culture references, worn anything but lightly. The Gogolian concept of “poshlost” – an untranslatable word in the ballpark of bourgeois vulgarity or kitsch – is explained with reference to the Kardashians. Dostoyevsky wouldn’t have agreed with the message of R Kelly’s I Believe I can Fly, Groskop tells us, embarrassingly. Chekhov’s three sisters’ longing for Moscow is described as a “first world problem”. Bad translations are likened to Kellyanne Conway-esque “alternative facts”.

If this sort of thing makes the subject matter more appealing to you, you’ll enjoy this book unashamedly. If you find it flippant or reductive, you’ll probably still enjoy it, but wince quite regularly between the laughs. Of course The Anna Karenina Fix is aimed to provoke the interest of the uninitiated. But it will probably end up being bought by or for those who already have an interest – curious or deeply involved – in the books themselves.

Still, anyone who truly loves certain books loves any opportunity to hear them talked about by another person who loves them. When Groskop says Mikhail Bulgakov’s The Master and Margarita “is a novel that throws its hands up in horror but does not necessarily know what to do next”, we know exactly what she means. She exhorts us to read in bed, on the bus or “in the outhouse”, and it works. (This called to mind my own first experience of the Russians, reading Dostoyevsky’s The Brothers Karamazov on the bus back from school, almost missing my stop because I was so engrossed in the mammoth courtroom scene towards the end.)

She has lovely insight into War and Peace, and how one’s approach to it is factored into the value of the work. “The great challenge… [is] to find the lesson about yourself as a reader which is revealed in how you tackle the process of reading it.” You don’t have to enjoy self-help manuals to appreciate this combination of life-lesson and dialectic. And, having never attempted this literary Everest myself, Groskop’s chapter on War and Peace made me want to start that book as soon as I’d finished hers.