The Ordinary Virtues review: Words of wisdom from Michael Ignatieff 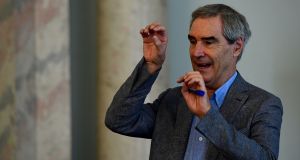 There’s a type of globe-trotting expert who loves to put himself at the centre of every anecdote and who projects universal meaning into trivial interactions with cab drivers and hotel concierges. Michael Ignatieff is exactly not that sort of commentator, and in The Ordinary Virtues: Moral Order in a Divided World he has written a book of considerable style and substance.

An ambitious project, he has sought to establish what moral values – if any – human beings have in common. Forget about proclaimed values: doctrines, holy texts and human rights instruments. How does moral reasoning manifest itself in real life?

There’s bad news here for liberals as, in the course of a three-year and eight nation journey, Ignatieff found ordinary people largely unmoved by the “elite discourse” of human rights and international law. “Generalities about human obligations and moral reasoning meant little to them: context was all.” Of course, that’s bad news for religious preachers and other ideologues too but it’s liberals who will take particular umbrage at this book, which is all the more reason why they should read it.

In countries as diverse as Brazil, the Unites States and Japan, Ignatieff – an academic, former politician and acclaimed author in fiction and non-fiction – is drawn to the conclusion that people don’t share specific values but what they do have in common is “virtue”, defined as “acquired practical skills in moral conduct and discernment”.

Virtue develops from the cradle to grave, as a habit within closed communities. It’s non ideological, and thus subverts “isms” of all sorts, from nationalism to cosmopolitanism. Since virtue is rooted in local exchanges, it “favours family and friends over strangers and other citizens”.

From the virtue perspective, diversity is of dubious value, and no amount of moral lecturing will change that. The US is a case in point. Even in cities where there are no economic or institutional barriers to integration, different ethnic groups choose to live apart. He cites a 2007 study which “found that neighbourhoods in larger US cities have a critical minority threshold – typically from 5-15 per cent – beyond which white families leave for residential areas that are predominantly white”. It is to Ignatieff’s credit that he takes on this taboo subject, asking “what actually is so good about [diversity] if we live side by side, but not together, if tolerance goes hand in hand with self-segregation and avoidance…?”

As he hops from one location to another, there is a touch of misery tourism and the countries chosen are rather random but Ignatieff is acutely aware of his privileged status and is upfront about the limits of his research. His visit to Myanmar is particularly timely as he assesses Aung San Suu Kyi’s handling of the Rohingya pogroms. While he understands why she is the focal point of western attacks, he challenges us to look beyond her – and the very western narrative of “the fallen hero” – to see what’s happening on the ground. In a country transitioning from military dictatorship to democracy, there’s a key question that needs to be answered: “Whose place is this?”

The question has echoed across Europe in recent decades. In former Yugoslavia where separatists drew borders in blood. In Britain, during the Brexit referendum. In Catalonia, where belonging means a cry for independence. “Whose place is this?” is the sort of question that sounds racist but Ignatieff cautions against generalisation.

He quotes David Hume’s maxim that there’s no such thing as “love for mankind” only love for this person or that. Liberals and progressives must try harder to understand how everyday ethics works; so runs the argument. From a human rights perspective, Ignatieff notes, there should be no limit on the number of people who meet the criteria for asylum being admitted to a country. But from the virtue perspective, “this idea removes from a political community its very sovereignty. It equalises the citizen and the stranger, removes the power of the citizen to determine who is worthy of the gift”.

On this moral conundrum, he believes his home country of Canada (whose Liberal Party he once led) produced the ideal solution with a refugee resettlement programme that encouraged communities to invite migrants into their neighbourhoods. A public fund was set up from which volunteer groups could draw down money. Its success has not gone unnoticed by other governments.

There is much wisdom in this book and a few basic pointers for progressives: rein in the righteousness; go easy on identity politics; and appeal to the better nature in everyone. As Ignatieff puts it, with some understatement, “it is possible that pure pity has done more real work to save victims than the language of rights”.