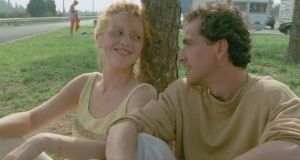 Dutch couple Rex Hoffman and his girlfriend Saskia Ehlvest are on holidays in France, not far from Dijon. They stop at a petrol station. Saskia goes to the shop. She does not return. She never returns. The police search and find nothing. Rex searches and finds nothing. Eventually he goes back to Amsterdam. He is consumed by the mystery of her disappearance. Eight years later a man comes to see him. He tells him he can reveal what has happened to Saskia.

The Vanishing tells its story in 108 pages. It is savage, brutal, devastating. It is also fundamentally honest. No phony resolution, no cosy happy ending, nothing to take away from the reality which Krabbe lays out. It breaks many of the rules of crime fiction. The reader knows early on what will happen. But this does not detract from the extraordinary suspense which Krabbe builds. We are with Rex every step of the way, even though we know where these steps will lead. Like many of my favourite books, as soon as I finished, I started to read it again. I wanted to believe that second time round it would end differently. But it didn’t. It takes guts to write a book like The Vanishing. It is different from anything else I’ve ever read. It has lingered in my memory for many years. It will continue to linger for many more.

Julie Parsons’s latest novel is The Therapy House, the 2017 Irish Crime Novel of the Year