Into Silence and Servitude – How American Girls Became Nuns, 1945-1965 by Brian Titley: review

This a well-researched, vividly written account of a cohort of women who had great influence on female life in America 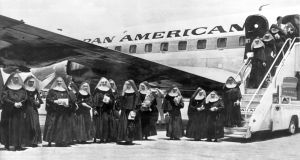 Thirty-eight Roman Catholic nuns of the Order of the Apostolate of the Sacred Heart arrive on a special Pan American refugee flight from Cuba, Miami, Florida, May 18, 1961. Photograph: Underwood Archives/Getty Images

Nuns are in the air. In Alice McDermott’s recently published eighth novel, The Ninth Hour, much of the plot centres on a community of nuns, the Little Nursing Sisters of the Sick Poor, dedicated to caring for New York’s needy population. Netflix recently had a hit with The Keepers, which explores the unsolved murder of Sister Cathy Cesnik, who taught English and drama at Baltimore’s Archbishop Keough High School, and her former students’ belief that there was a cover-up by authorities after Cesnik suspected that a priest at the school, A Joseph Maskell, was guilty of sexual abuse. And The Handmaid’s Tale, Margaret Atwood’s 1985 book recently made into a riveting TV series, mimics the hierarchical structures of convent life with its dystopian Handmaids, Marthas and Aunts.

Brian Titley’s Into Silence and Servitude examines the mechanisms through which young American girls and women became nuns between 1945 and 1965. He chose this time period because it was during these years that the greatest number of girls attended Catholic schools, and the greatest numbers became nuns. The period also covers the timespan between the end of the second World War and the second Vatican Council.

Titley takes us through the various phases of formation for nuns: aspirancies, high schools for boarders dedicated to attracting young girls to convent life; postulancy, their first introduction to life as a nun; the novitiate, a period of intensive religious training leading to reception and profession of vows.

The Catholic church was seriously opposed to the American public school system, and set up its own network of Catholic elementary and high schools, where religion was an integral part of the curriculum. As Baby Boom children began to appear after 1945, it was clear that the church would need to increase its school network, and that it would need large numbers of new recruits to religious life to staff it. Teaching nuns were cheap: they did not get a salary, and were prepared to suffer onerous working conditions which would not have been tolerated by their secular colleagues.

The Church began to look at the advertising techniques used by Madison Avenue to design mechanisms for recruitment. They hired recruitment professionals to intensify sophisticated persuasion of girls towards the cloister, and were remarkably successful. By 1965, there were 180,000 nuns in the United States, the highest number ever.

Titley uses the memoirs of mostly former nuns very adroitly to give us a sense of what life was like during this period for those who felt or were persuaded that they had a vocation. Despite the church’s toxic fear of sexuality, the “Brides of Christ” designation for nuns had a very unhealthy aura of sexual desire built into it, channelling feelings that would otherwise have found outlets in human sexual partnerships. One nun recounts how her teacher (a nun) was thrilled when Dolores Hart, an actress who was the first to kiss Elvis Presley on screen, became a Benedictine sister: even Elvis could not compete with Jesus.

One of the major problems with religious life in a rapidly changing society was that convent monasticism had not changed in centuries: rules and systems designed in the 17th century still prevailed. The vows of chastity, poverty and obedience were very strictly enforced, with obedience involving unquestioning subservience to superiors, even when their orders were patently absurd. Isolation from the outside world was seen as essential, and ties with families, friends, and particularly, boyfriends, had to be cut. The habits worn were medieval in appearance and uncomfortable to wear.

Many parents (50 per cent) objected strenuously to their daughters entering religious life, particularly as young girls with no experience of ordinary life. They questioned their capacity to give up marriage and children, as well as career opportunities, at an age when they couldn’t possibly understand their sacrifice. Some of the retaliatory tactics used by the church were shocking: if persuasion as to spiritual well-being for the girl and her family didn’t work, parents could be threatened with mortal sin, or told that their daughter would probably be taken from them by death from illness or accident.

In the end, the twin unstoppable forces of Vatican II and secularisation effectively put an end to the convent system. Vatican II did away with obedience and poverty. Isolation ended; nuns read newspapers, listened to the radio and watched TV. (Chastity was left in place, to the detriment of male and female religious.) There were large-scale defections from convents, and a catastrophic decline in recruitment. Catholic girls who wanted to be teachers now chose to do so in the public school system, where they were paid. Between 1965 and 2015, the number of Catholic nuns in the United States fell from 180,000 to 48,500. Surprisingly, the number of practising Catholics increased in the same period from 48.5 million to 76.7 million.

This a well-researched, vividly written account of a cohort of women who had great influence on female life in America, and the forces which built their numbers and then led to their collapse.