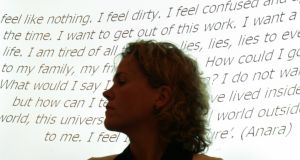 Denise Charlton, CEO of the Immigrant Council of Ireland, listening to details of a 2009 report on Globalisation, Sex Trafficking and Prostitution - The Experiences of Migrant Women in Ireland. Photograph: Frank Miller

“In those rooms with those men, I’m not real, ever, and playing a part is the only way to get through.”

“I run like the rabbits run when they know they are being hunted. Even though I’m smaller and my sandals are loose around my ankles, I’m still the fastest…”observes 12-year-old Nico as Harvesting opens. The scene is a rural setting, in an as yet unnamed country, where we meet children on the cusp of adolescence, playing freely, away from adult supervision.

The novel is structured as alternate chapters voiced in turn by two narrators. We first meet Nico, climbing a tree, racing with her dog, diving into the watering hole in her cream cotton dress. Through Nico’s eyes we see and hear the difficulties faced by a family, a community, with few resources and the further difficulties faced by the females here who it seems are either a commodity (Nico) or a skivvy (Nico’s mother), neither of whom have a voice, much less a choice. Although we learn that Nico is the brightest in her class, winning prizes for her essay writing, everything changes when she starts to menstruate. She has no knowledge of what this is, has had no preparation for this event from her mother. In the subsequent scenes when she has to show her mother her efforts at washing out the evidence on the sheets, we experience her shame at this marker of difference. She is now no longer a child and her father makes arrangements for Nico to be sold, as a “wife”.

“A wail follows on the air, which could be the dog or Mama, or a fairy cap being ripped from its branch too soon.”

Sammy, the other protagonist, is just a couple of years older. Her family lives in a middle-class Dublin suburb and are financially and culturally advantaged, but Sammy is not being cared for. Her mother drinks, her father absents himself. She “acts out”, drinking alcohol, having sex. Her best friend Lucy, a “good girl” who struggles to help the angry and destructive Sammy, tries to persuade her own mother to do something:

“Have you? Do you really believe that?”

“Sometimes other people’s problems are not our concern.”

Inspired by her involvement with the Stop Sex Trafficking of Children and Young People campaign in 2012, Harding gives the reader the opportunity to know who these girls are, and what is being done to them. The language here is beautiful, the imagery heartbreaking. We are with Nico as she is removed from her family and begins to see, and later to experience, what exactly is to become of her. Magda, who accompanies her through Europe, tells her “Just do as they say. It will be over quicker that way.”

Although we understand from the beginning that Nico is scarcely out of childhood, Harding waits until halfway through to remind the reader, as Nico must remind herself having been forced to adopt a different persona by her captors:

“My name is Nico. I am thirteen in two weeks and two days. I come from Moldova. My country is shaped like a bunch of grapes and no sea touches it.”

Sammy’s geographical journey is less than Nico’s but it’s a journey nonetheless, from a naïve Pretty Woman belief that she could sell herself and remain in control, to the experience of the brutal reality that is the sex trade:

“I’m screaming inside, a fucking giant’s roar. I can’t believe I’m managing to stay silent, the fist knocking against my ribs, working its way upwards, so I think it might be lodged in my throat and gag me, from the inside.”

Both girls end up together in an anonymous house on an unremarkable suburban estate, with other girls, all prisoners who must go wherever they are brought each evening and do whatever is demanded of them. This is now Sammy’s reality:

“The nights stretch, ten, twelve, twenty of them, not a moment off. Time is a shape-shifter, a trickster. It stretches forwards and folds back on itself like an accordion. It’s out of tune, out of sync, and there’s nothing distinct from the sensation of it passing… I feel I’m being played.”

While reading I had the growing and unsettling feeling that the events rendered so vividly were likely happening in a place near me as I read. When I thought the traffickers of these girls, and their male customers, could not have them sink any lower or be more humiliated something worse happened. There was one point in the novel where I asked if this could possibly be yet another aspect of sex trafficking in Ireland and Harding’s eloquent writing had me believe that, yes, it probably is.

To read Harvesting at this current time is chilling. We have seen the rise into power of naked misogyny, accompanied by overt bullying and abuse of authority. Harding’s novel presents us with the inevitable outcome when females are regarded as lesser beings, as objects for consumption, for profit. Despite the topic, and her personal involvement in related charities, Harding avoids making this a polemic. Instead, she uses lyrical language to have us witness the brutality of sex trafficking, to experience the sordid reality, to not avert our eyes. Coincidentally, while writing this review I attended a performance of Eugene O’Neill’s short play, Hughie, written in 1942, and it was striking to me that every reference to women in the play served to dehumanise and degrade them – “broads”, “blondes”, “doll”, “dumb wide-open dolls”, “tramps”, and so on, although there are no female characters in the play itself. Those who keep the sex trade going in Ireland and internationally, act out this script vis-à-vis women, “not real, ever,” as Harding’s Sammy puts it.

Harding has previously written short stories and plays and is also an actor. In Harvesting, her first novel, she shows herself to be a writer with a superb mastery of language, in the service of a story that we need to hear.
Margaret O’Brien lectures in English at Waterford Institute of Technology. Harvesting is published by New Island and is the November 2018 Irish Times Book Club choice