How can the arts serve social awareness and activism?

A beautifully crafted, painful story like Harvesting can be a springboard for important social conversations 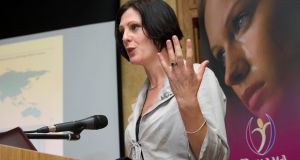 Ruhama is the NGO supporting women affected by prostitution and sex trafficking in Ireland. The organisation is also member of a network, CAP International, of 28 similar frontline organisations in 20 countries across the globe. Our work is at the coal face in responding to the damage caused by commercial sexual exploitation, a trade which includes the prostitution of minors – an estimated 10 million children worldwide . From Delhi to Montreal and Mexico City to Dublin we and our colleagues value the contribution the arts can offer for both awareness raising of this issue and as a mechanism for survivor healing and activism.

At this #MeToo moment in time in Ireland we are starting to truly interrogate some of the social issues that assist in creating optimal conditions for the commercial sexual exploitation of women and girls. Issues of: early sexualisation, grooming, harassment, gender inequality, bodily autonomy, male entitlement, and the demand for the purchase of sex which drives the sex trade.

Consider a child, alone and helpless, subjected to the worst sexual violations imaginable. Most of us flinch from doing so because it is almost too hard to bear – a self-protective reflex as the mind recoils. We see in our mind’s eye the face of children in our own lives whom we love, and repel the image because the pain is too much to bear. Innocence should be protected not destroyed. It is a challenge to discuss things that are almost too abhorrent to conceive of. But if there is the possibility that they might be occurring right next door to us we have a social responsibility to do so.

Art can be a vehicle for us to transcend the boundaries of what we currently know or think, and act as a tool for us to interrogate our current beliefs, critically examine our world and our role and responsibilities as occupants within it. Works of fiction based on factual realities can be more comfortable vehicles than raw truth, to stimulate and challenge us to start conversations, investigate and take action for change.

In 2015 I was approached by author Lisa Harding, who asked me to read her novel Harvesting. The book tells the intertwining stories of two girls, Moldovan Nico and Irish Sammy, whose lives collide when they are both sex trafficked in Ireland. Lisa wanted to make sure she was handling the fictitious subject matter responsibly in her wish to give voice to the experiences of the real victims she had encountered, and to raise awareness of their plight.

When I sat down to read the manuscript I prepared to clinically assess the content for credible representation, based against the true stories Ruhama had encountered in Ireland, as well as our global awareness of the targeting and exploitation of vulnerable girls into prostitution. Ruhama has met girls similar to both Nico and Sammy. Girls like Sammy who were badly neglected, even if outwardly living in comfort and affluence, and groomed by boyfriends who prepped them for prostitution by breaking down their boundaries through exposure to pornography and sexual abuse. Girls like Nico whose own families commodified and sold them in the context of deprivation, poverty and the social devaluing of the girl child. We have also met and supported countless adult women whose first experience of prostitution was as a minor but who – in the blink of an eye – turned 18 and were somehow transformed from child victims into apparently “consenting adults”, as though the imprint of their exploitation was magically erased.

I assessed the trajectories of Nico and Sammy into well-concealed brothels and private “gentlemen’s parties” and I knew there was nothing fictional in this. At the same time, I also became completely engrossed in a beautiful story of unlikely friendship, solidarity and sacrifice which created a paradoxical reading experience – simultaneously heartbreaking and heartwarming.

As social activists calling for the reduction of commercial sexual exploitation of both children and adults alike, we know that a primary step in any strategy for social change is to raise awareness. An important part of driving social change is getting people to think about their own ideals, emotions or opinions towards a particular issue. If the problem is not accepted as reality in society as a whole then there will be no movement for change. Art, through its many media, can act as a catalyst by drawing attention to the challenges society’s most vulnerable face in ways that will connect with the audience on an emotional level – the place where beliefs and attitudes are formed and changed. Using a deft touch, art can stimulate empathy. When an empathic connection with the most marginalised and their experience is created, there is the potential to generate positive change.

Art can also mobilise and empower the most vulnerable members of society themselves. Many survivors of sexual exploitation have found their own voice through creative expression. In Ruhama women have variously used poetry, photography, theatre and painting to express themselves, share their experiences and raise awareness.

A beautifully crafted, painful story can be elevated to the level of activism when it creates a springboard for important social conversations on the cause and consequence of sex trafficking. Harvesting can be one of these stories.
Sarah Benson is CEO of the Dublin-based NGO Ruhama. Find out more at ruhama.ie