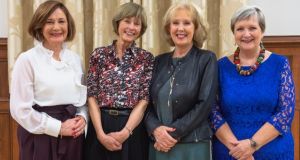 It did seem in 1968 that pretty well everyone in First Arts English at Queen’s intended to be a writer, if they were not so already. Everything pointed to it: on the streets round the university, the initially heady excitement of the civil rights movement, soon to be shocked into political action, stirred many an undergraduate into poetry or prose. Inside the university, with teachers like Seamus Heaney and contemporaries such as Medbh McGuckian, Ciaran Carson and Conor O’Clery, not to mention the soon-to-arrive Paul Muldoon, a high bar was already in place.

All of these won early and deserved recognition. In my own case, however, it was not until over a decade later that I even made a start, with the wonder of a prize for a short story from the great pioneer Sam Hanna Bell, author of December Bride and champion of Sam Thompson, whose controversial Over the Bridge once caused an establishment outcry. To discover the following year, to my great surprise – a letter inviting me to a reception at Listowel Writers’ Week having gone astray – that I had won another prize, this time from the equally legendary David Marcus, then to see my work published in his New Irish Writing and find myself on the shortlist for a Hennessy Award, felt little short of miraculous.

And yet, perversely, just after I seemed to be on my way, I changed tack completely. Introduced by a friend to a writer whose work I greatly admired, Seamus Heaney’s early mentor, Michael McLaverty, I hoped only to learn from him; but when he unexpectedly and most generously offered me complete access to his papers and manuscripts, I found myself on the path to an academic career, which I thoroughly enjoyed for over 20 years.

Yet everything comes around. In the late 1990s, noticing that the Royal Society of Literature had just announced the first VS Pritchett memorial award for a short story, with Hilary Mantel and Michael Holroyd as judges, I thought I might just enter and see what happened. What happened was that I came runner-up, which I couldn’t mind, given that the winner was John Arden. David Marcus then published my story, The Cocktail Hour, in his first Faber Book of Best New Irish Short Stories (2005), and asked me where that novel was that he had been encouraging me to write in 1981. That is how my first novel, The Friday Tree (Poolbeg, 2014) came into being, with David its first reader; but not before I’d segued into the academic world again.

I was preparing a series of lectures on Jane Austen, because I hadn’t ever quite given up the academic and research side – still haven’t – when I found a reference to the fact that one of Jane Austen’s nieces had married Lord George Hill, an Irish peer. I remembered that in my university job at Queen’s University’s Institute of Irish Studies, from which I had just taken early retirement, we had on our library shelves a copy of Lord George Hill’s Facts from Gweedore, an account of his radical, even controversial reforms on his estate in Donegal’s Gweedore. Following this lead, and scarcely able to believe what I seemed to be discovering, I found that not one but three of Jane Austen’s nieces lived, died and were buried in Donegal, which meant five years of some of the most extraordinarily interesting research I have ever undertaken, and led to May Lou and Cass: Jane Austen’s Nieces in Ireland (Blackstaff, 2011). That story continues to unfold, and I continue to follow it, accompanied most recently in June this year and last by the Jane Austen Society of Australia; last month, during Letterkenny’s Literary Festival, I led a tour of the places associated with Jane Austen’s Irish family in Gweedore.

Despite this intriguing and richly rewarding project, the work I do still returns to the fascination of fiction. Two short stories Roses (2007) and Portrait of Elizabeth (2015)) have been broadcast by BBC Radio 4; The Friday Tree was followed in 2016 by a second novel, The Way We Danced.

Years ago I wrote, in my study of Michael McLaverty’s work, The Silken Twine (Poolbeg, 1992), that though he was a master of the short form, McLaverty had, in his own words “turned (his) back on the short story” in 1949 to devote himself to the novel form. Yet, though he wrote only seven more short stories in his lifetime, it was this short fiction that gave him the glorious flowering of his later years when David Marcus brought out, through his then new publishing house, Poolbeg Press, first The Road to the Shore, and then The Collected Stories, and all his novels from the very first, Call My Brother Back.

I never expected that anything of that kind might happen to me. Yet, because I had been fortunate enough not only to be encouraged and published by Sam Hanna Bell and David Marcus, two who shared a profound and passionate belief in the power of the short story as a form, but to meet after many years a third editor of their calibre, Alan Hayes of Arlen House, I have just seen gathered into book form, for the first time, a selection of my own short stories of the last 40 years. The title, taken from the story which brought me back to the writing of fiction, is The Cocktail Hour.

I find myself thinking of TS Eliot – not The Cocktail Party, but the poetry Seamus Heaney taught us to consider and appreciate back in First Arts in 1968. I remember especially, from Four Quartets, Eliot’s vision that the end and aim of exploration would be “to arrive where we started/ And know the place for the first time”. Seeing this book at last in print, I begin to understand what they were so patiently teaching us all those years ago, TS Eliot and Seamus Heaney both.
Dr Sophia Hillan is former associate director of QUB’s Institute of Irish Studies, literary executor of the McLaverty Estate with his daughter Maura Cregan, and author of The Silken Twine: A Study of the Works of Michael McLaverty (Poolbeg, 1992), The Edge of Dark: A Sense of Place in the Writings of Michael McLaverty and Sam Hanna Bell (Academica Press, 2000) and editor of In Quiet Places: The Uncollected Stories, Letters and Critical Prose of Michael McLaverty (Poolbeg, 1989). She is also the author of May, Lou and Cass: Jane Austen’s Nieces in Ireland ( Blackstaff, 2011) and of two novels, The Friday Tree (Ward River, 2014) and The Way We Danced (Ward River, 2016). The Cocktail Hour (Arlen House, 2018) is now available from Dubray Books, Hodges Figgis and, in Belfast, at Books, Paper, Scissors